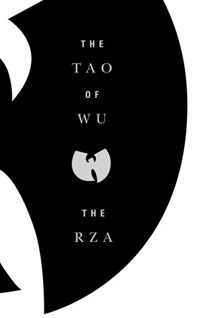 There was a period of time in 1993 where every night after work when I got home, I played Enter The Wu-Tang: The 36 Chambers. Really still one of the most phenomenal recordings and still one of my favourites. This album is what its all about. Its actually one of those albums that is bigger and better than what its artists attempted or thought and this I mean as a compliment. Sometimes artists make things that are just transcendant to their intents or dreams or educations....it goes to some other realm. Even though Rza is one self-aware and conscientious artist this piece of work is still transcendant. I mean, The Wu knew what they were doing from inside and out. This album is still bigger than them. I recommend two books about hip hop, one is Jay Z's Decoded and the other is RZA's book The Tao of Wu.If you're a hip hop fan you'll already be down with a lot of the language and you might have already read these books. But there is substance for those of us already seasoned rap and hip hop folks. If you aren't much of a fan...or you only know a few hits from the 80's you really might enjoy checking out this book. Stagg and I surprisingly...had just never read it till now, five years after its release. I found some really interesting things in the book. Stagg and I saw Wu-Tang a few years ago...top five concerts EVER.

One thing that really bowled me over was a note in RZAs book about Clarence 13x. I was aware of the ideas of the %5...but not much. How did I never hear about this guy? It seems that his life is quite mysterious and each person who has met him or studied with him has a very different take. You eiother think hes a thug or a Father. I am now really obsessed with findiong out more about him...and I have a new fantasy...there should be a movie about Clarence 13x!

Clarence 13 x seems to have taken his studies about Islam and made them very accessible and street friendly with concepts that could be understood via slang, code and quick memory devices. RZA says that most of hip hop language rises out of the teachings and cultural influence in NY and Harlem from Clarence 13x. This is just fabulous to me and intriqing. One didn't have to know about Clarence 13x to follow the messages and vernacular in rap and hip hop, but to hear a claim of such a specific source is just so amazing to me.