We have some pretty exciting evenings with my nephews and friends watching the Canucks in the Playoffs here in Vancouver. The first couple weeks we were here Vancouver was playing the Blackhawks! Oh boy, did Stagg raise eyebrowns when folks here were introduced to him. Those games were super fun watching with our nephews everyone was just pasted to the tv and tv room. My nephews loved the real life drama of Chicago up against Vancouver. We did not plan our arrival but it sure added to the vibe around here. Hey Stagg had the hockey excitement last year...and it's time for Vancouver.

I just love the motif above. I had this on a t-shirt when I was in high school out here on the Island and up in Kitimat. My t-shirt said "property of the Vancouver Canucks" right under that team design. That was the design for Canucks hockey team from 1970 to 1980. I've seen a lot of shirts with this design on them this season around town.

A variation of the above motif was on team players during the 70's and early 90's. But my two faves are the new Orca/Haida inspired design and the ol' simple hoockey stick. We are all pretty stoked for this weeks Stanley Cup to begin on Wednesday.
Posted by Candy Minx at 13:51 2 comments: 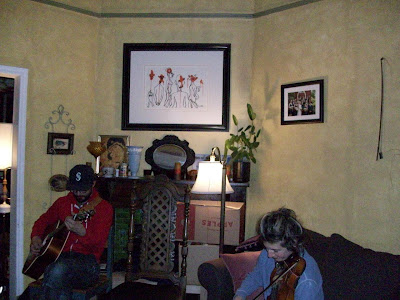 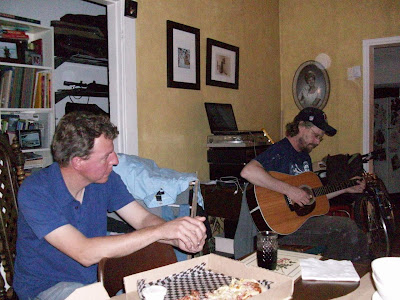 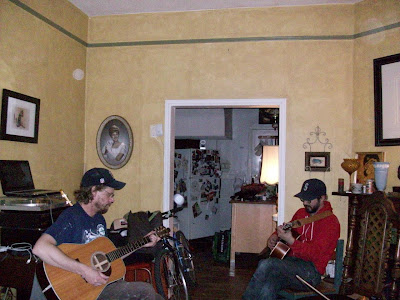 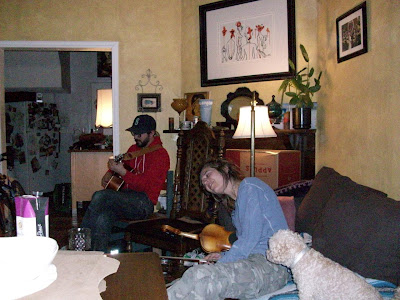 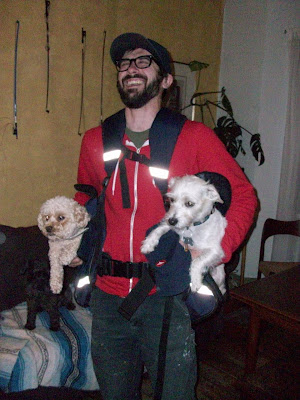 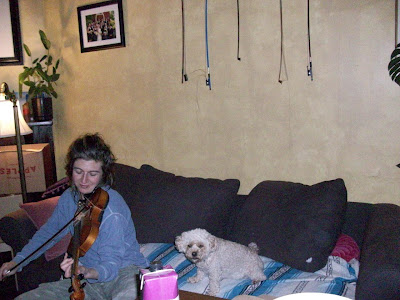 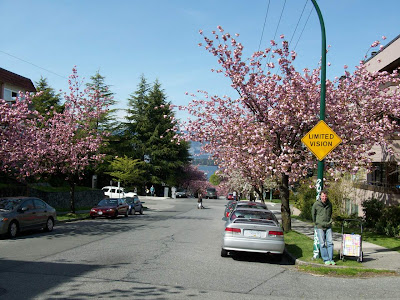 I don't know if this picture really captures just how flipping beautiful it can be here in Vancouver. We are walking down Yew Street to Kitsalano Beach and to stop at the pubs along the way. I love the blossoms and the sky...and the mountains are visible too as we walked. 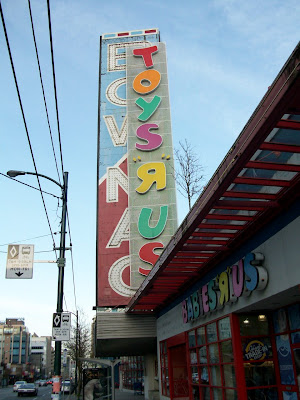 I've just always liked this sign where one comapny put their sign right on top of another sign. This is a sort of landmark near Kitsalano. 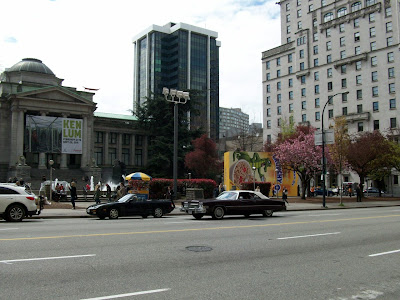 Moving downtown...right by the Art Gallery, several artists display their work for sale. We met a fellow who suggesed we get large paper clips to hang our canvases on the construction fence. I was taking a break and stretching my legs while we were busking and checked out what I thought was a kind of cool sculpture of a giant ceral box outside the Vancouver Art Gallery. Turns out it is an advertisement for a car. I guess it's a thin line between art and commerce these days...well maybe it's always been that way ha! 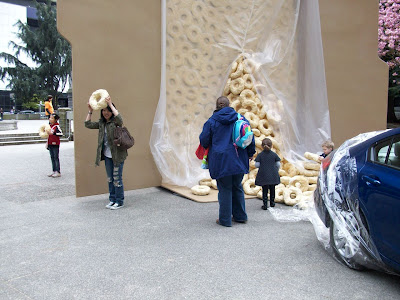 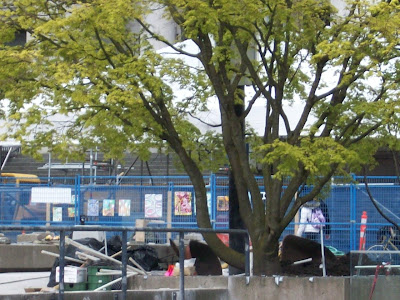 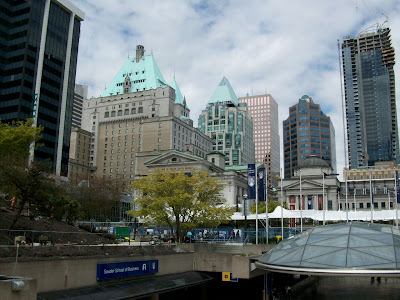 I've walked over here to this vantage point...ala The Conversation to take a picture of the setting of where we enjoy busking here. If you click on the photo above you'll be able to distinguish Stagg and our art work hanging on the blue construction fence. What a beautiful location and isn't downtown Vancouver pretty? 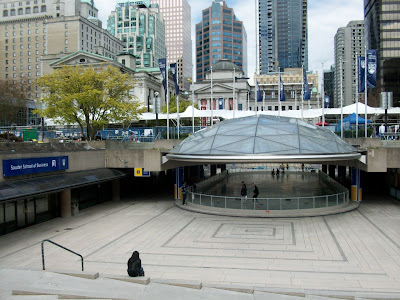 Sitting on the steps of the Vancouver Court House, looking way over to where we have our paintings set up, there are young people dancing under the huge skylight cover which seems to also be a skating rink or dancefloor. Really good dancers too doing break and hip hop moves. In the 1990's, on the steps above in front of the Art Gallery there used to be tons of punks and urban hipsters dancing West Coast Swing. I like that there seems to be a street dancing tradition now here in this area of downtown Vancouver.
Posted by Candy Minx at 16:08 3 comments: 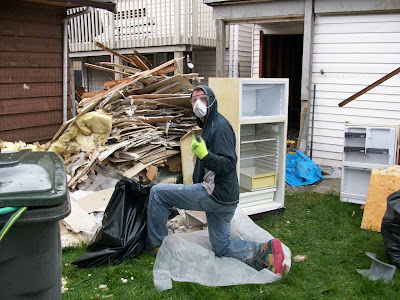 We had the great luck to have a friend in town who needed help with her new house. So where we been is helping paint and demo some of her place to get ready to move her in. Here are some odds and ends of what Stagg (and his new buddy, Patric) have been up to tearing out rotten plaster and wood...they had the hard work...while I've been painting... 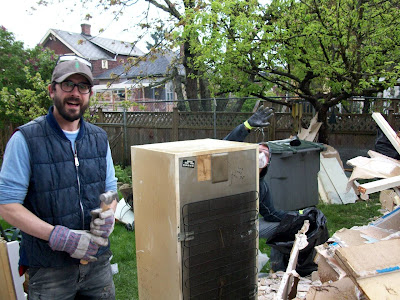 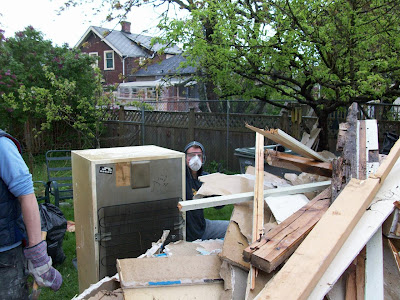 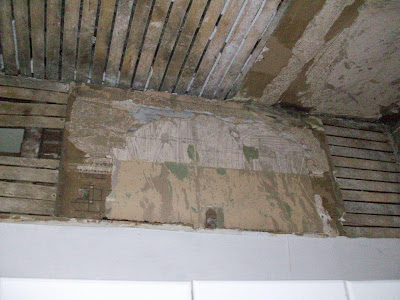 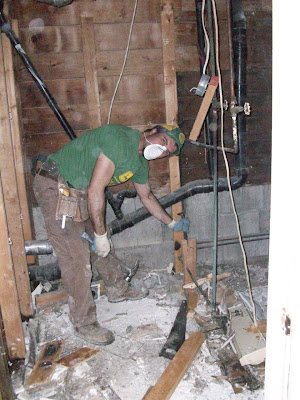 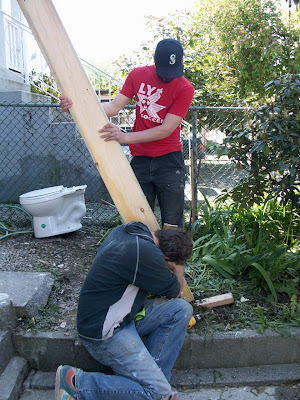 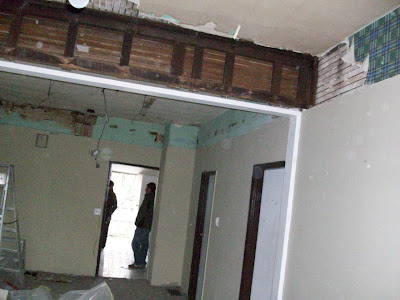 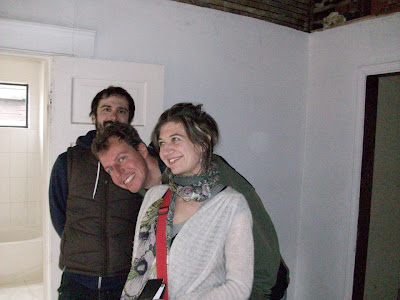 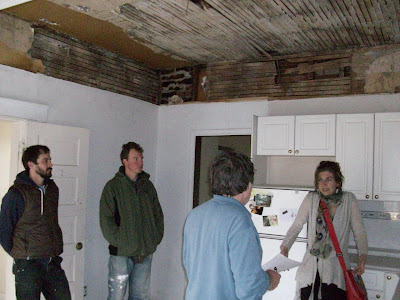 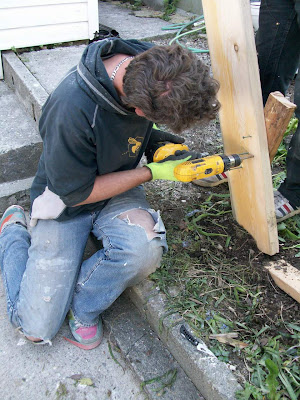 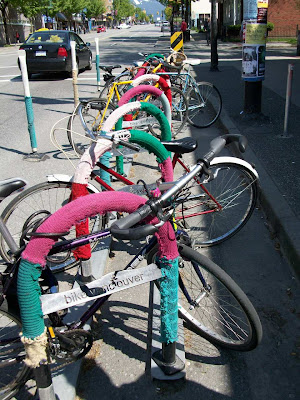 Only in Vangroovy! Someone, or several of us...have knitted cozies for these bike racks. I love it!
Posted by Candy Minx at 15:20 1 comment:

The Tree Of Life

The mysterious Terrence Mallick has his film wrapped and it's one of the those movie releases that come around that I just can NOT wait to see this movie. The trailer is breathlessly beautiful
Posted by Candy Minx at 14:53 2 comments:

Howdy, haven't had tome to upload pics, but hope to get that done the next couple days. I've had a housepainting gig and its taken up most of my spare time. All fantastic to have a job here in Vancouver. We've been to the beach a lot and spent a lot of time playing crib with my nephews. It's so good to be with everyone out here on the left coast.

BBC doc with Marcus Du Sautoy on consciousness.... Check out the website "Documentary Storm" in general. It has tons of really good movies available to watch, including several I have written about here. Like "Garbage Warrior".
Posted by Candy Minx at 13:25 3 comments:

So This Is How Liberty Dies


"We also support the exploration of alternative ways to deliver health care. Moving toward alternatives, including those provided by the private sector, is a natural development of our health care system."
- Stephen Harper, Toronto Star, October 2002.

"It's past time the feds scrapped the Canada Health Act."
- Stephen Harper, then Vice-President of the National Citizens Coalition, 1997.

"What we clearly need is experimentation with market reforms and private delivery options [in health care]."
- Stephen Harper, then President of the NCC, 2001.

"Withdraw from the Canada Pension Plan... Collect our own revenue from personal income tax... Resume provincial responsibility for health-care policy. If Ottawa objects to provincial policy, fight in the courts... [E]ach province should raise its own revenue for health... It is imperative to take the initiative, to build firewalls around Alberta... "
- Stephen Harper in an "Open letter to Ralph Klein," January 24th 2001.
Posted by Candy Minx at 14:17 No comments:

Good riddance!!! One of the biggest sore losers in the world is dead. Well done President Obama!! 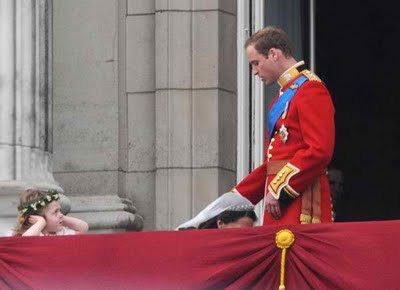 There are about 9 parts to this documentary on Youtube....

The term environmental art is used in two different contexts: it can be used generally to refer to art dealing with ecological issues and/or the natural, such as the formal, the political, the historical, or the social context.

Depending upon how you look at its definition, earlier examples of environmental art stem from landscape painting and representation. When artists painted onsite they developed a deep connection with the surrounding environment and its weather and brought these close observations into their canvases. John Constable’s sky paintings “most closely represent the sky in nature.” [1] Monet’s London Series also exemplifies the artist’s connection with the environment “For me, a landscape does not exist in its own right, since its appearance changes at every moment; but the surrounding atmosphere brings it to life, the air and the light, which vary continually for me, it is only the surrounding atmosphere that gives subjects their true value." [2]

It is possible to trace the growth of environmental art as a "movement", beginning in the late 1960s or the 1970s. In its early phases it was most associated with sculpture—especially Site-specific art, Land art and Arte povera—having arisen out of mounting criticism of traditional sculptural forms and practices which were increasingly seen as outmoded and potentially out of harmony with the natural environment. From Wikipedia

Andy Goldsworthy is a an "environmental artist" or "site specific artist".