Singer/songwriter Dave Sawyer joins us this week and plays a couple songs.
Posted by Candy Minx at 10:24 1 comment:

Artificial Intelligence, Transhuman Gnosis, and (Anti)Demiurgical Gnosticism from the Sands of Arrakis through the Deserts of the Real to the Mesas of the Hyper-real

This roundtable continues an ongoing conversation concerning the intersection of conceptions of transhuman and posthuman possibilities with the reception and representation of esotericism, occultism, and magic in popular media. In particular, aspirations to create artificial life – including intelligent, sentient, and sapient life – have a long history, ranging from the magical animation of statues through the creation of spirits with and without material bases, artificial elementals, material familiars, homunculi, golems, zombies, “magical machines”, collective spiritual egregores, and the sentient, self-replicating servitors and eidolons of contemporary chaos magic. Almost all of these have been represented in popular fiction for centuries, and this fiction has in turn influenced the aesthetics and even the techniques of practitioners. The conception of the “automaton” and associated metaphors of unconsciousness have been as significant in modern occulture as ancient and enduring metaphors of waking, dream, and sleep. In the modern anti-cosmic gnostic esotericism of Gurdjieff, for instance, human beings are likened to automatons bereft even of a consistently self-aware sapience and consumed for sustenance by the lowest and most proximate celestial powers. and only through esoteric work can they be awakened. Less stark and uncompromising elements of the Gurdjieff work have become popularized and influential (often without attribution) in various magical worldviews and systems of New Age thought.

A related, though distinct, inheritance into contemporary practice and contemporary fiction is the idea of influencing unborn children or producing children through occult means, whether actual or symbolic. This trope cuts across genre and political boundaries alike, being as appealing to Aleister Crowley and Jack Parsons as it was to Heinrich Himmler, and as present in horror as in fantasy and science fiction. These tropes unite in the imaginaria of cloning, replication, and simulation, particularly as a technique of self-perpetuation or self-immortalization, and one that easily crosses boundaries of organic reproduction and inorganic artifice. These conceptual inheritances make it fitting and striking that (regardless of the specific accuracy of the post-Herbert sequels to his original speculated execution) an underlying theme of the Dune saga is the conflict and tension between artificial modeling and spontaneity, comparable in significance and subtlety to the underlying concern with authenticity, simulation, and counterfeit in the work of Philip K. Dick. The iconic neo-cyberpunk, techgnostic expression of this inheritance into popular media at the millennium was The Matrix. Accompanied within the millennial turn by a number of “Gnostic” films, and thematically continued on the Sci-Fi Channel through Battlestar Galactica and its Dune adaptation, questions of transhuman and posthuman consciousness have continued to flourish in adaptation, such as Altered Carbon and Westworld. In a secularized post-monotheistic imaginal world, questions of free will and predestination remain relevant but diversely configured, making it unsurprising that media as seemingly disparate as Dune, Terminator,The Matrix, Battlestar Galactica, and Westworld share a concern with nonlinear experiences and representations of time as well as anxieties concerning consciousness and sapience as simulation and artifice. What continued relationships and interactions are likely to be relevant between these developments and contemporary variations of esotericism, occultism, and magic?

The Matrix Revisited: Virtuality and Simulation as Popular Esoteric, Occult, and Magical Representation

The forthcoming continuation of The Matrix trilogy occasions this retrospective reflection and discussion on the significance of virtual-reality and simulation allegories and metaphors in two inter-related but distinct aspects: esoteric worldviews in general and Gnostic worldviews (particularly “anti-demiurgical” Gnostic worldviews) in particular. The immense popularity of Matrix-inspired memes, most notably the red pill (now deployed in context ranging from mysticism and spirituality to metapolitics and conspiracism), has ensured the franchise’s continued relevance to popular culture to the extent that someone can be “redpilled” by any number of ideologies and/or (according to their own account) systems/methods of liberation without having been alive when The Matrix was first screened. Why did this particular aesthetic intersection of neo-cyberpunk aesthetics and initially anti-demiurgical Gnostic mythology (despite apparently positive references to Zion) gain such momentum, recognition and pop-cultural cache? Its cultural moment was accompanied by other less influential but still significant “Gnostic” films, including The Thirteenth Floor, Dark City, The Truman Show, Vanilla Sky, and eXistenZ — a trend which seemingly abated quickly in the post-millennium. The apparent brevity of this mainstreaming of Gnosticism did nothing to diminish the persistence of Philip K. Dick adaptations, re-adaptations, and adaptation sequels, but the Gnostic trend seems to have diminished in favor of a more generalized liminality and uncertainty concerning the nature of reality. The Wachowskis’ Jupiter Ascending , with its Hermetic planetary rulers (including overtly Gnostic references, such as to Abraxas and Cain as the agent of the fallen princess) and space-opera aesthetics, was poorly received. What makes our contemporary circumstance the moment for return to The Matrix, and what Gnostic and/or anti-demiurgical motifs are current in other media — particularly in the interactive fiction that the Wachkowskis initially regarded as a plausible vehicle for and consequence of the influence of The Matrix? To what extent does the political deployment of Matrix memes likely condition and filter the reception of neo-cyberpunk and tech-gnosticism, and how significant are the anti-demiurgical and more broadly anti-cosmic features in contemporary “Gnostic” media? Most broadly, given the pervasive ubiquity of interactive games, simulations, virtual environments, and the increasing plausibility of aesthetically convincing AIs (setting aside the question of actually sapient AIs — but don’t let this mere description stop you from opening that can of nanoworms, since nobody expects the Butlerian Jihad, except maybe in two of the other roundtables below), how might the representation and reception of pre-modern esotericisms in general and Gnosticism in particular continue to be adapted as relevant to a world facing transhuman possibilities combined with resurgent conspiracisms? Just how deep does this rabbit hole go? 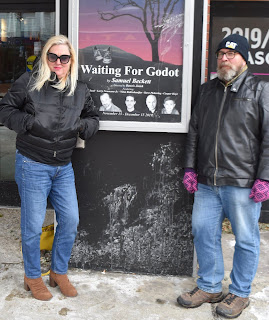 Eugene and I did a phot session in Nov 2019...outside the BIOGRAPH theatre where Dillinger was shot. 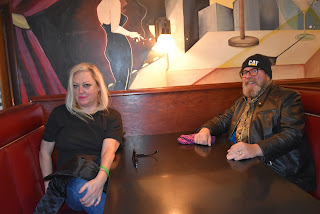 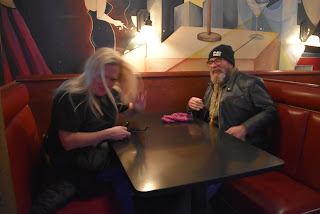 
I've been watching COUNTERPART and it's very good. I love the opening title sequence with a Go Game in it. The motifs that are included keep mirroring that game...
Posted by Candy Minx at 21:37 No comments: