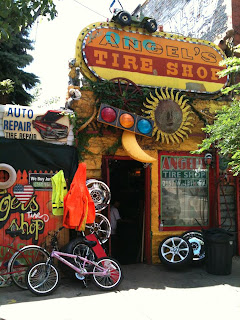 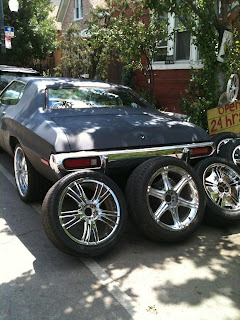 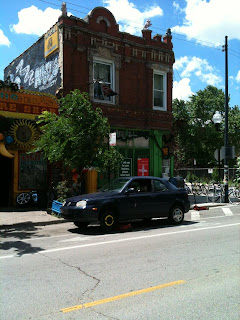 We got a recurring flat tire...so time to change it and get a new one. Guess what? There are lots of tire services right down the street from our house.  This is such a beautiful classic situation here called Angel Tires. And a naughty tire got good service. 5 minutes!
Posted by Candy Minx at 13:46 1 comment:

Oneof my best friends sons...he plays ultimate professionally and here is an interview...
Posted by Candy Minx at 11:47 No comments:

I'm very proud of my man. Look, I'm a film maker...and all film makers have to have day jobs. We're insane workaholics on some level. There's a lot of people out there who say "I'm an artist" "I'm a film maker"...but they don't have day jobs. I'm a film maker...I have to have day jobs. It's just so damn expensive to make a movie, even a short film...you have to have a day job. And anyone who doesn't have a day job is a bullshitter. I will do anything to make a buck and to put it towards editing, filming, craft services. Unless you're Speilberg or Bay...you've got a day job. But traditional "fine artists" often get caught in a trap of not working. A day job also keeps you in touch with your community...with other people who also have day jobs. That healthy. A lot of people say well Candy you're a bartender...I don't see your films in theatres. Thats okay I keep plugging away. I got rejected from the Cannes competition. But how many people can say they tried to put a film in Cannes? But my man he schleps his art work al over the place. John Cage
said the picture frame is the enemy of art and I think the gallery is too. Stagg works day jobs, picks extra work and he still hauls his paintings out to the streets. And not a lot of folks, especially artists...who believe they are too good to have a day job... have ever said to him..."Man you're kicking ass. Thats cool you busk." Non-artists have given him a lot of props for busking. Busking is a centurys-old practice. Get it on the street, for people to take home: And my guy gets it out there! He gets rejected all the time...and some people see him as ghetto for selling outside...he keeps on going...He is working so damn hard at stuff, it's humbling. Stagg you kick ass and I am so proud of you!!!!
Posted by Candy Minx at 12:33 1 comment: 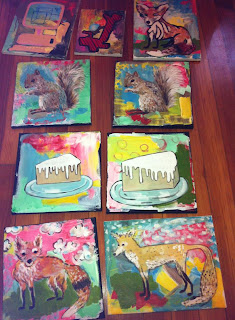 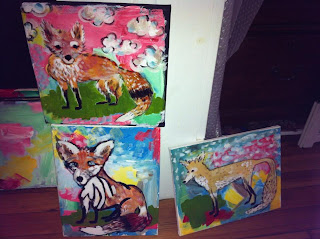 Made some foxes for sale and to take out busking...
Posted by Candy Minx at 15:10 1 comment:

Not Putting Off Stuff 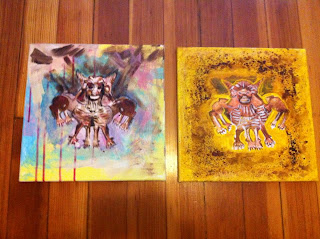 I have been on a binge of catching up on projects started and not finished...taking stuff to dry cleaner, assembling photo albums (600 photos and counting) and just doing a pledge to myself not to procrstinate. It's exhausting but I've got a number of things caught up...and I must say it does feel good. An example is this idea for a gift to a friend in England. Stagg and I each made a version of the photo of a detail in a chirch. Only...I hadn't finished my section. But at last I finished it a week ago and it is in the post today!!! YAY!!! Now I need to figure out how to blog participate in my book clubs, read, work and still not procrastinate...any advice? 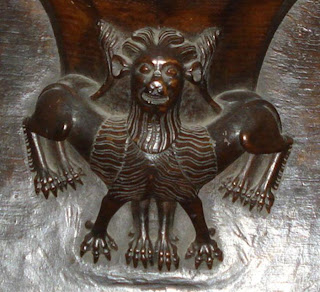