A friends brother is #47 on Amazon downloads. Congrats Bo! He's # 2 on British and Irish charts.


Download on Amazon here
Posted by Candy Minx at 14:28 No comments: 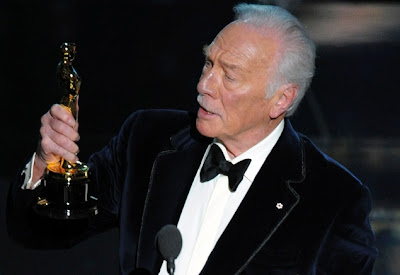 Oh I love Christopher Plummer and his thank you speech was great. He looked so good it was crazy. Handsome, distinguished. I had a little crush on him when I was a little from The Sound Of Music. Plummer has several roles I've loved him in from Night of the Generals to Eyewitness to The Insider. He is the real deal like a worker bee of an actor and I love that about him. 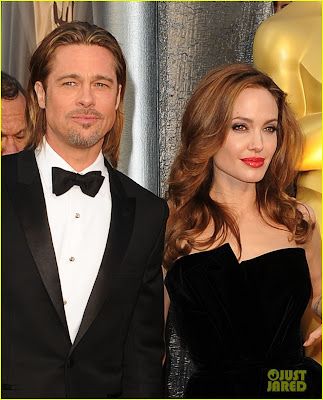 Last night at work it was the Pine Leaf Boys doing a dance class and then two step! I love my job! Above the video is from December 2007 at Blue Moon Saloon...we were there in October 2007 if I recall correctly. Below is a nice video in St. paul. 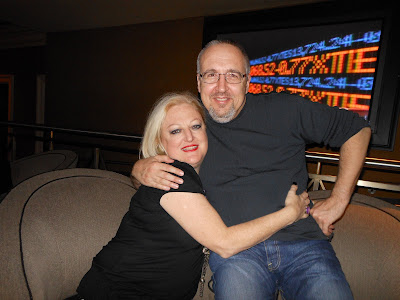 Here is one more pic from Las Vegas trip where Tricia and I met up with a friend from Germany and my Cormac McCarthy online bookclub, Greg. We are at a funny bar in Cesars. Actually it's the same bar a bunch of us went to the night Stagg and I got married.

I have an invite to go to Knoxville in a few weeks. My friend who translates Cormac McCarthy into Portuguese is going to be in Knoxville and Stagg and I want to drive down to meet up with him and our friend Wes. I have no idea of we can wrangle this trip but we really want to so I'm sending it out to the universe. Life is hectic around here...need a plumber for laundry sink need to get the car worked on (of course right?) and need to meet weird hours at work juggling a couple of different jobs. Wish us luck and cross your fingers!
Posted by Candy Minx at 14:34 3 comments: 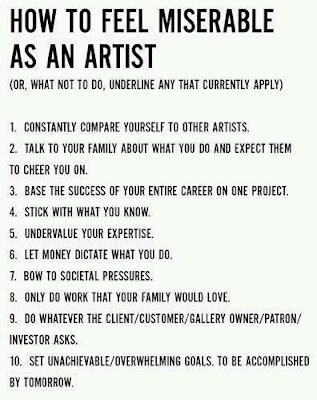 "Alas, first Michael and now Whitney. They represented two strains in 1980s pop culture: Houston, a child of the gospel tradition, and Jackson, the alien artist who took the music in directions nobody'd imagined. Not incidentally, that's a tension that runs through the Museum of Contemporary Art's powerful new "This Will Have Been: Art, Love & Politics in the 1980s." Curated by Helen Molesworth of Boston's Institute of Contemporary Art, the show presents artists at a crossroads between the classical and the radical—between political complacency and impatience."

"The decade spills beyond its formal boundaries. One persuasive claim made here is that the 80s are still with us because so much of what defined them—HIV, the preoccupation with mass media, a conservative political class impelled by racial and sexual paranoia—is still with us. The street-protest aesthetic embraced by the Occupy movement recalls actions by feminists and AIDS activists, who became frustrated—no, furious and desperate—at outrages against their communities. In 1989 the artist collective Gran Fury created Kissing Doesn't Kill, a series of bus placards showing a mishmash of couples—biracial, straight, gay—kissing. The punch line: "Greed and indifference do." That same year a "public service message" from the Guerrilla Girls listed The Advantages of Being a Woman Artist; the lead entry was "Working without the pressure of success." "

From an article in the Chicago Reader about a new show at the Museum of Contemporary Art...
Posted by Candy Minx at 16:54 No comments: 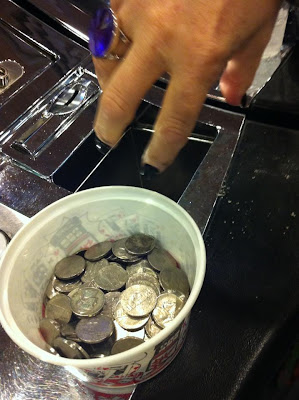 My fave place in Las Vegas is all around the original downtown. I love the "neon museum" and the older style hotels and casinos. We ate at a diner called Du-pars. We played slots where our paid out was all in nickels! Tricia's fave looking casino is The Binions. Isn't that great with the tourquoise and pink neon lights? 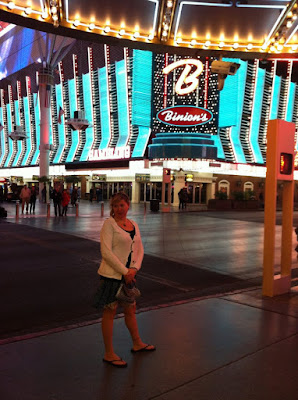 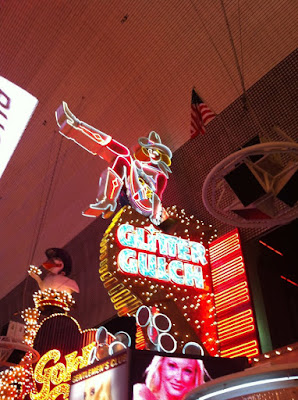 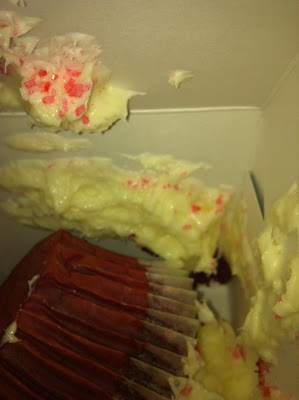 We got a red velvet cupcake at about non...it had some rough trade over the next 12 hours...I can relate. Today when we got home I felt like I had been beat up. Oh its fun to get to Vegas and then you need to rest ha ha! Thanks Tricia what a fun time I can't wait to go somewhere again!
Posted by Candy Minx at 13:28 1 comment: 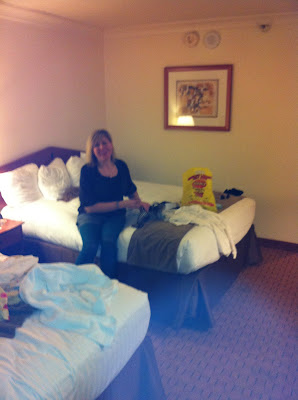 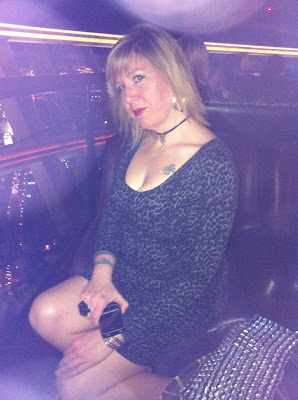 Up in the tower of the Stratosphere Hotel we got appetizers and martini's and enjoyed the view. 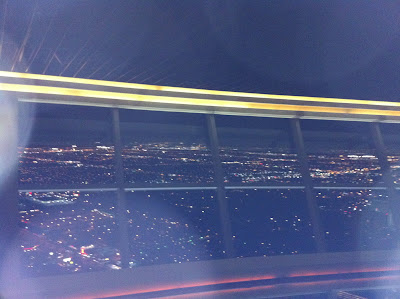 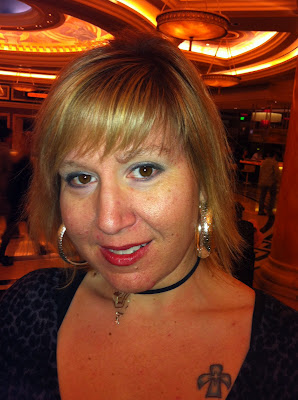 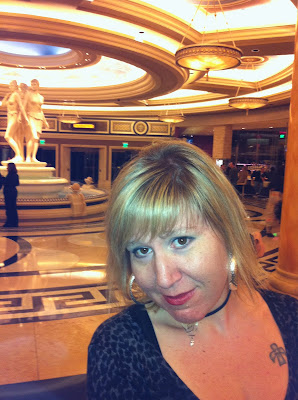 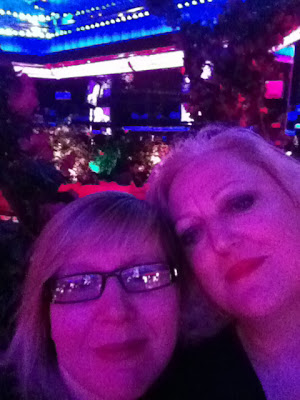 We spent most of our days in the hottub at the hotel. We kicked it old school staying at the Stratsophere which was a pretty cool not too big casino. We even had some great luck on the slots. While we were in the hot tub we met a lot of folks. One was a guy from New Jersey who got in the pool and forgot his iPhone was in his pocket. Oops. We also met some guys from Wales and from Austrailia and from Ireland. I have a favourite ar in the whleworld its called The Peppermill so of course I had to take Tricia there. We invited our hot tub pals but only Ireland joined us. We had a really great discussion about the world. Obama, Ireland and life in general at The Peppermill with our buddy from Ireland. We solved a few of the worlds problems. The Peppermill has a featured moment in the movie Casino. 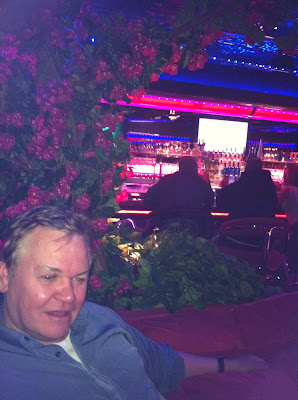 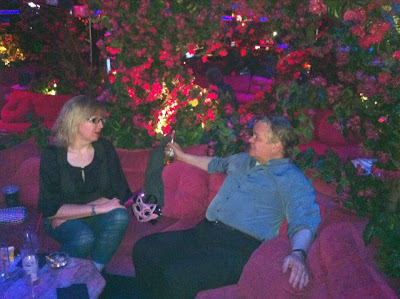 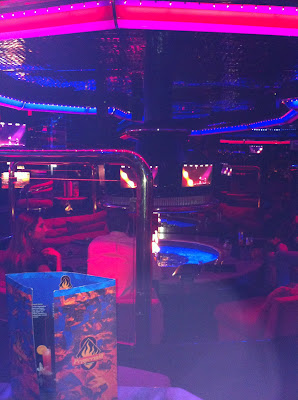 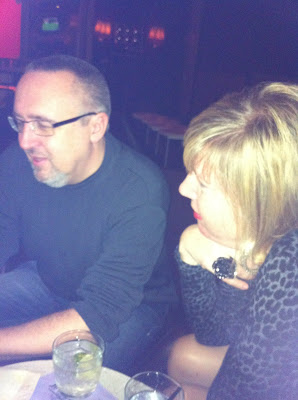 When we realized we were going to go to Las Vegas and a friend of mine from Germany was also going to be in town we planned on getting there at the same time so we could have a meet up! How wonderful to be able to meet up and catch up. My friend Greg and I have known each other for 15 years and we met on an online bookclub for Cormac McCarthy. We had a lot of fun catching up. Having some cocktails and playing slots and Roulette. 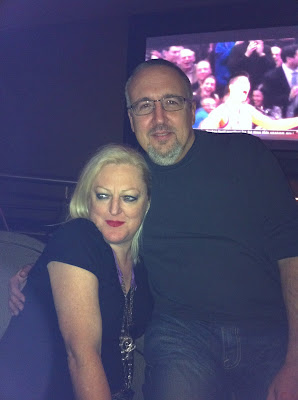 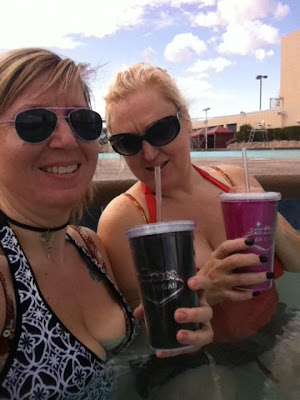 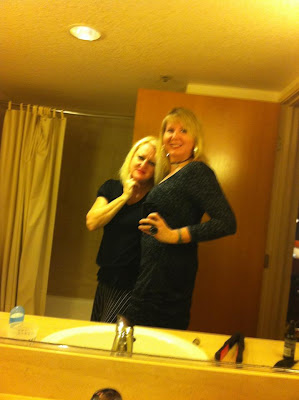 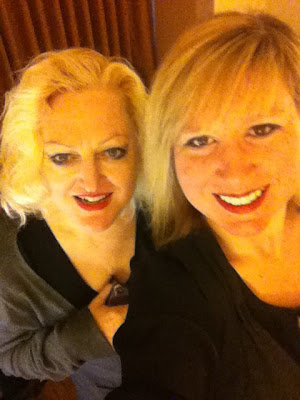 Tonight...Patrick Bateman is inconsolable...
Posted by Candy Minx at 22:42 3 comments: 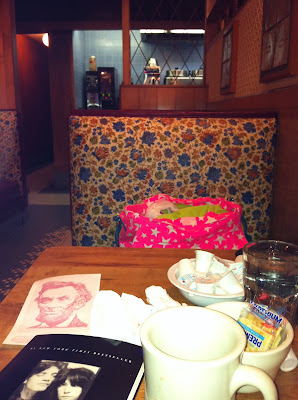 I've seen Patti Smith perform a couple of times. One time was her tour sometime after her husband, Fred Sonic, had passed away and she was in mourning...but encouraged to perform and write. It was a painful empathetic show and I remember feeling really sad for her. Smiths performance was so emotional and perhaps cathartic. Oddly, I did not think about that she had also lost not only her husband but a few years earlier one of her best friends, artist Robert Mapplethorpe.

I was very excited to read Smith's memoirs of her first years in New York City with her boyfriend Robert Mapplethorpe called Just Kids. I read the book like a vampire almost all in one sitting. One day before work I thought gee I'm going to finish reading this last bit at a coffee shop. I found a diner style place called the Lincoln Restaurant which seemed a bit like the kinds of places Smith described her and Mapplethorpe scraping their bits of money together for a grilled cheese and coffee. What a mistake. The whole time I was reading the book it was very bittersweet. After all, you know how it ends. It's also bittersweet because Smith's recollections are so perfect a description of what it is like to be a young obsessed artist. I was always thinking about how much my friends like Mister Anchovy, or Paul Jones or Susan Murray or Mac Dunlop and I would love going for a donut or coffee or drinks..and we always talked about movies, or music or art we had seen or were struggling with. Just Kids is the best example of what it is like to live, and work, as an artist. And it captures a time period often only spent as young people. With the kind of passion, obsession and philosophical pursuits most people put behind them as they get older.

Anyways...it was a mistake finishing the book at a diner. Sure I knew how it ended and I thought no big deal. But I had the big loud sobbing ugly cry. I had to get up and get napkins from other tables. I took a pic above of my pile of tissues. Fortunately you can't see all the snot...I was a total wreck and I had to go to work with huge puffy eyes...and I almost kept crying the rest of the night.

Stagg took over the book and he plans on reading it a couple of times. You simply can not put it down...and he leaves me notes like "Patti left her mark @ St. Marks-n now Robert is take'n Poloriodz-hello 'society, hello leather'n studs...hey babe take a walk on the wild side"

It's difficult to explain but the following songs are part of my dna. They are in my blood. I've burned out several vinyl versions of "Dancing Barefoot" and I wasn't even able to watch the videos below because I started crying again! Which makes me laugh. Special bonus videos below featuring Johnny Depp. Eddie Vedder, U2 and BRUCE! Good thing I've seen them before because i can't watch them right now ha ha...

Thanks for the gift of this book from Tuffy P and Mister Anchovy! xxxxooo

Madonna Bowl And "It's Halftime In America" 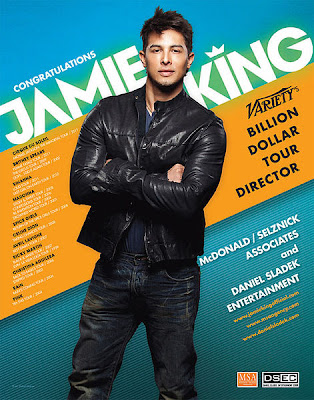 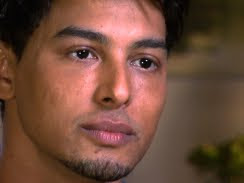 The best part of the game and the commercials (which were more or less boring) was MADONNA! LOVED the Roman Gladiators pulling her out like Cleopatra. Also thought Madonna was wise and generous to include Nicki Minaj, M.I.A. and LMFAO and Cee Lo in her show. Well done!

And who directed her performance?

(CBS News) Madonna's Super Bowl XLVI halftime extravaganza -- Roman soldiers and all -- was the brainchild of Jamie King. Every aspect of the star-studded, 12-minute spectacle, from the choreography to the lighting, costumes and sets was overseen by King, who's been Madonna's creative director for the past 13 years and, interestingly enough, is a superstar in his own right.

This wasn't King's first Super Bowl experience. He choreographed Diana Ross's halftime show in '96. And he danced with his idol Michael Jackson in the early 90's at the Super Bowl and on tour.

These days, he's considered the most successful concert director of all time. His shows include the Britney Spears' Femme Fatale tour, Christina Aguilera's Stripped tour and Ricky Martin's Black and White tour. His tours have grossed nearly $2 billion.

When asked what a concert director actually is, King replied that he doesn't exactly know himself. "You know, when I started in this game, I started as a dancer," King said. "And then I became creative director for Madonna, which turned into director for Ricky, and Britney, and Rihanna, and Madonna. It just kept growing." fro here


As for the commercials...they were pretty drab. The best was is obvious...David Beckham. The "go daddy" were completely stupid. The Ferris Bueller was brilliant like a puzzle hunting contest. I loved the Clint Eastwood Detroit commercial and the dog losing weight advert. The rest hum haw.

Try not to cry watching this advert...it's god speaking!

Okay, you all I know I love my stories. I love my tv shows. Well, if you get a chance try to rent, or go to the library or catch America In Primetime. PBS made a great mini series doc with tons of interviews with so many writers and actors of the best tv shows out there. The four episodes are centered on archetypes of tv characters which include, The Independent Woman, The Man of the House, The Misfit and The Crusader.

All of the tv shows we watch today are referencing or built or rejecting upon the shows in the past and the series does a great job of juxtaposing and looking back at tv characters with contemporary tv.

The interviews showcase inspirations and connections between such shows like The Avengers and The X Files... 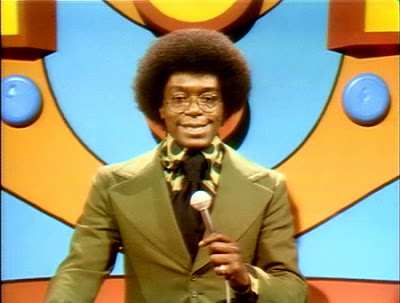 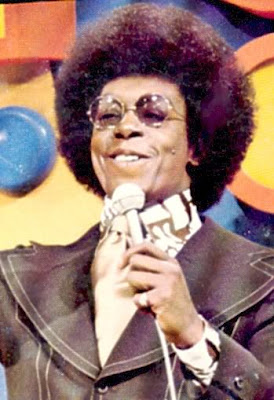 The coolest show on tv EVER.

5.2 (1) An air carrier shall not transport a passenger if …
(c) the passenger does not appear to be of the gender indicated on the identification he or she presents;

Harper's government needs to be confronted about the wording in some of the Aeronautics Act. 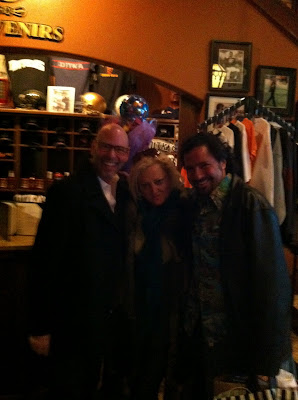 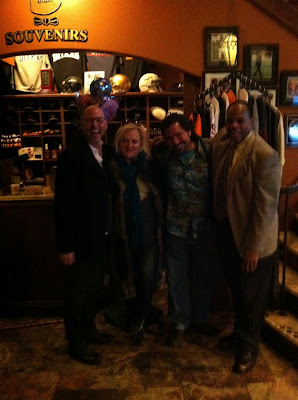 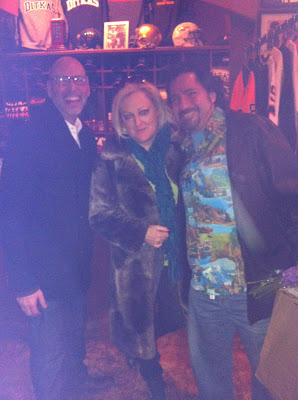