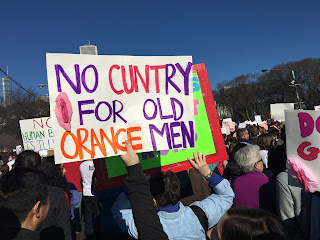 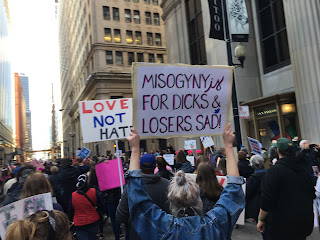 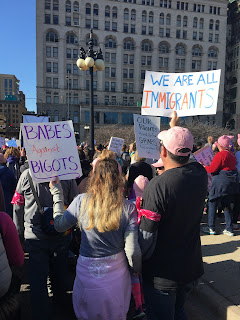 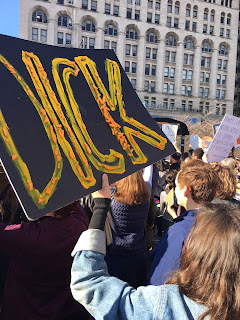 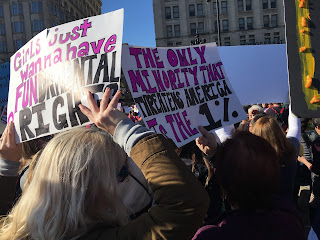 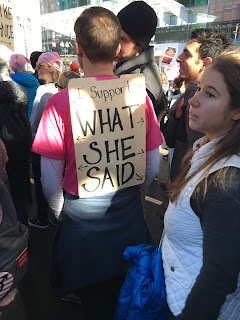 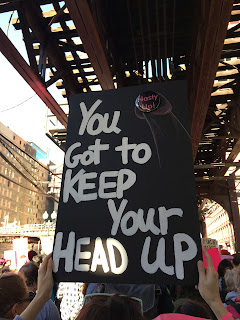 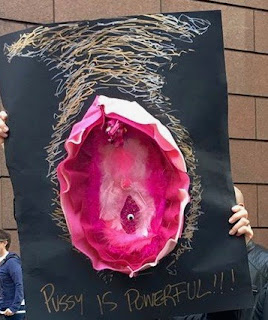 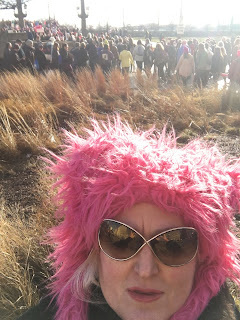 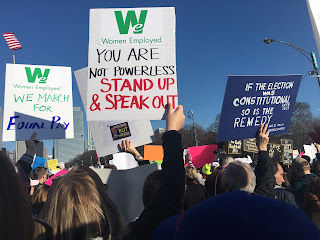 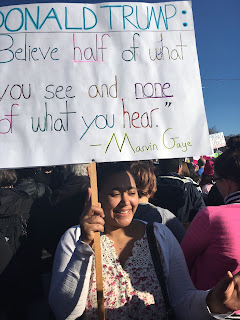 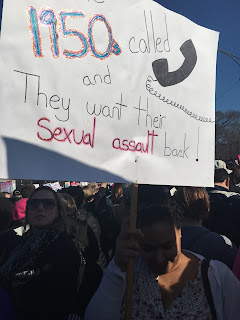 I am very sad about the canabalizing of feminism. It's been through the last 6 months through the heat of the election till now. Feminism is not a patriarchy, yet, people are acting as if it is. We have so many unique personal perspectives on issues and not one of them can emerge if they are approached competitively: Feminism's base is an ethical base. It is patriarchy and corporatism that believes in hierarchy. When educational facilities become corporate they anoint their students with corporate entitlement.
Where is the wisdom for the person who is "more informed" to use that skill to reach out and be more patient? Isn't there an ethical responsibility where having "more information" means needing to have more responsibility for communicating clearly and kindly? What is the value of having a so-called education if it comes without walking the higher road...and seeing it as a responsibility to be more communicative and more patient than those one deems "uniformed"?
Feminism offers an opportunity to practice ethics. Each woman finding a way to listen to each other despite the urge to compete for one's own personal agenda. I am an outsider...I fall into a small group of feminists whose focus is on the environment, animals and economic re-distribution. It's very difficult to find a politician who represents those issues, and many people have taken umbrage with me because I feel the environmental issues are the ethical and scientific structure to frame all issues. (I've been bitten by some canibal feminists.) One of the hierarchies at work right now is the war between the city and the country. Where I sit, it is the utter breakdown of an ethical perspective. It seems as if people do not know how to argue without making personal attacks or dismissive choices of words...and that is a problem.
We need to protect not just the land of the countryside...but also the people who reside in the countryside. The ethics of our whole situation are that we need to embrace all the issues...wholistically and be able to see that people in the countryside are suffering terribly. They are poor and feel no one is listening to them. We need to find a way to get food and livelihood to people in both the countryside and in the cities...the two areas of the culture need to begin to cross-over and communicate. We need a way to protect medical needs AND environmental needs AND ethical needs. It's too easy for higher educated people to feel superior to those they believe are "ignorant" or "rural" (code word for stupid). The lack of compassion towards those people who one deems "uniformed" are systemic of the way education has become a commodity and excuse for entitlement. The educated need to find a way to communicate with those people who may or may not use the same vernacular. What is the purpose of getting "informed" if one uses it as a hierarchy to dismiss others.
Posted by Candy Minx at 07:56 No comments: 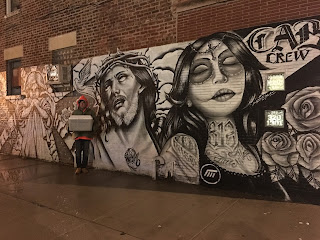 Stagg and I made beef and cabbage stew the other day to take out to people living outside. We often go to the viaducts on the northside....but we also take hot food out in the southside. Stagg led the way with a cooler filled with servings. Some people live in nooks, doorways, loading docks and under an auto service car port. 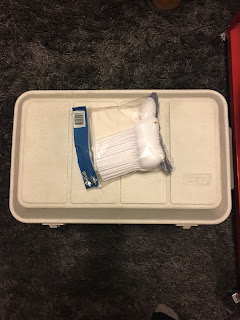 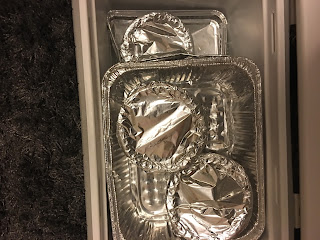 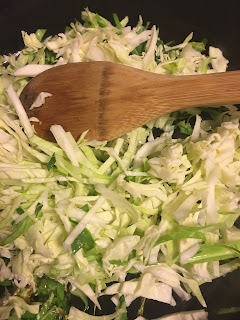 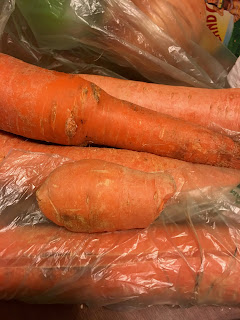 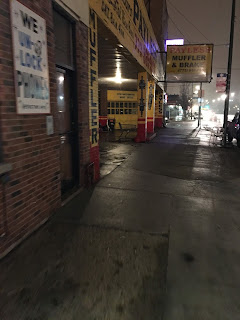 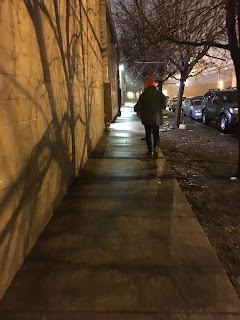 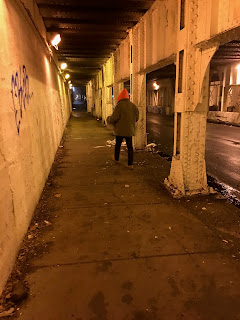 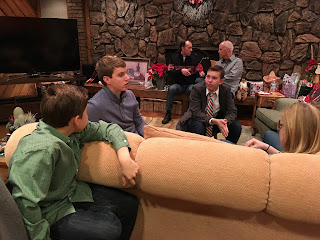 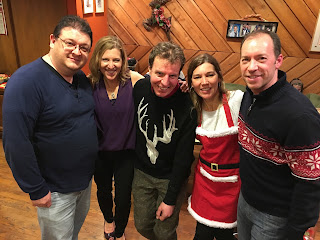 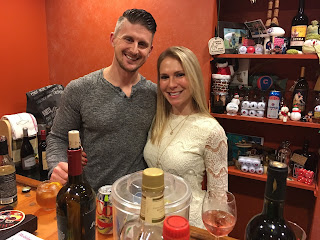 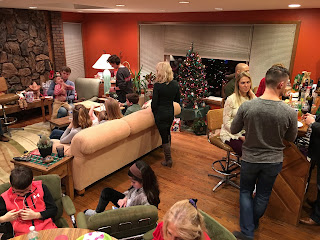 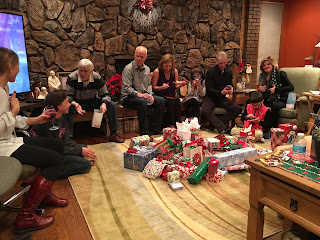 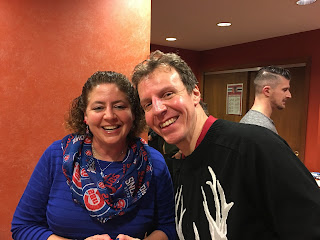 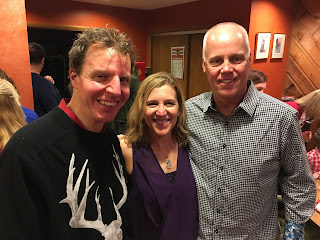 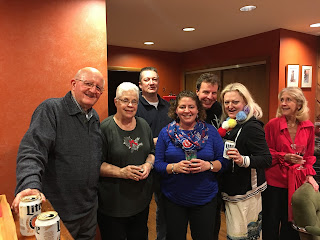 
3. The Current Moral Disorder and Its Consequences

"I'm visiting here from the future. What many people are focusing on is not the big picture. The voters of the future are only going to be interested in the environment and everyone being able to make a living. There won't be any place for leaders who are selfishly motivated. When we focus on nature and compassion we erase the illusion of hierarchy. There isn't any such thing as hierarchy, it's a social construct. The desire for power at the expense of other people is corruption. Nature and the environment is the real hierarchy, and the path to our restoration from a corrupt world." The Venusian
Posted by Candy Minx at 17:03 No comments: 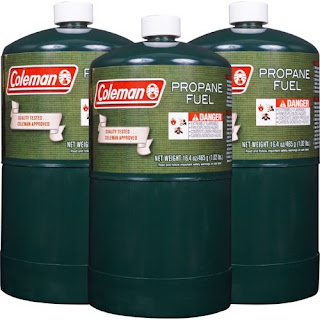 We are looking for small camping propane tanks. If you are in the Chicago area and are able to donate these items, please email me at candy.minx@gmail.com

If you have a second hand tent that you might be ready to upgrade and replace....and could donate we could use those too. These items are for people outside. Thank you and sorry for always asking for help.
Posted by Candy Minx at 11:33 No comments:

I Sent My Husband To The Store For Baking Powder 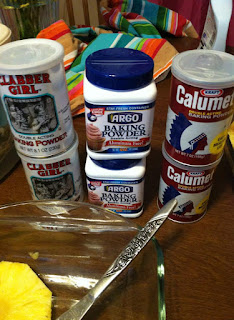 I just made a oatmeal cake with caramel topping today. I was glad that I had all the ingredients in the cupboard since this is a holiday.

When I went to get the baking powder...I remembered this photo I took for Facebook. In June 2013....I sent Stagg to the store to get baking powder.

My fault. I just said "get baking powder". So he bought all the baking powder he could carry. How would he know that he could now bury me with this baking powder thats how seldom we need to use it in life.

This is the sitcom of living with Anthony Stagg!
Posted by Candy Minx at 14:20 No comments: