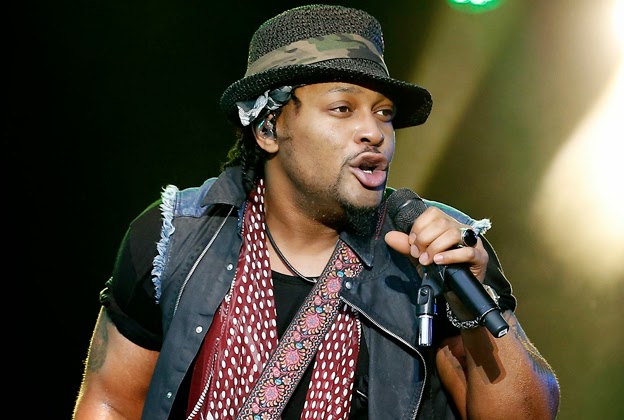 A few years ago when I worked in a corporate retail store I was almost always scheduled to work with high school kids. One of life's joys is trying to find conversation at work. You know around the water cooler sneaking some fun social currency into a dry dead end job conversations can make or break your quality of life. How could I get some convo with high school kids...? Music of course. Two of these kids would always sneak to the back of the store and share earbuds....and they would dance. One of them was a b-boy....he would slide down ladders and practice his moves hiding from the managers. the first time we talked about music I asked them what was their favorite music and what they listened to of course. I was stunned to find out they listened to Rhythm and Blues. I thought Rhythm and blues was...like... for old people!

I went home and told Stagg that I was blown away. These kids friends were writing music and they all wrote R&B.

I was just really kind of amazed by these young kids listening and really exploring R&B. In the last few years though...R&B has been crossing the very genres it created, if thats possible. And yes, R&B artists have had major airplay. One voice has been MIA though. Gone for 14 years.

BLACK MESSIAH is a mind-blowing psychedelic masterpiece of voice and sounds and implosions all gently performed that sneak up on you. Where did this guy go for 14 years. He was one of the biggest up and coming stars in music...rumours have it that fame was his cruel mistress and he had a lot of knocks. I am so glad he survived and he has made this album. The ways it is rap and hip hop is in it's secret seeming game of dozens. Some of the lyrics seem to hint at calling out major hip hop and rap music. The lyrics often tease around with familiar wordings like "say my name". They seem to humbly lock horns with major hits....yet they are played as straight up sincere songs and words....it's magical to listen to it and not hear pokes to performers who did not let fame stop them from making music.

Self-referential...DAngelo might not have broke the internet with his body but he broke MTV.  And a funny lyric riffs on his famous naked music video and one of the many humorous lyrics mentions his famous abdomen. And there are a lot of funny lyrics. This is an album to lay on the floor in the dark and play over and over. I can see this as a major trip-based concept album. Written and worked on truly love-tied to it's (and my heroes) heroes like Prince, Marvin Gaye, Sly Stone, Teddy Pendergast and Luther Vandross and George Clinton. The first thing I said to Stagg when he played it for me was ..."Oh my god...it's so trippy and psycheddelic."
Not only is this a funny and terribly sexy album....it has the odd sensation of being truly magical because it's hard to tell if it's hardcore sexy....or hardcore spiritual. That blurred line is what absolutely makes it genius and beautiful. Because it's both. And it has some tragic touching lyrics with political and philosophical pain. I was gonna quote some of the lyrics...but I just really believe the best thing to do is play this record over and over.These are lyrics to return to and mull around with. This album lures you into  a love affair. Get a pillow and blanket and some herbal...tea. It's time to make love with the universe on the floor. Get this album now! And ask yourself....who is the black messiah? 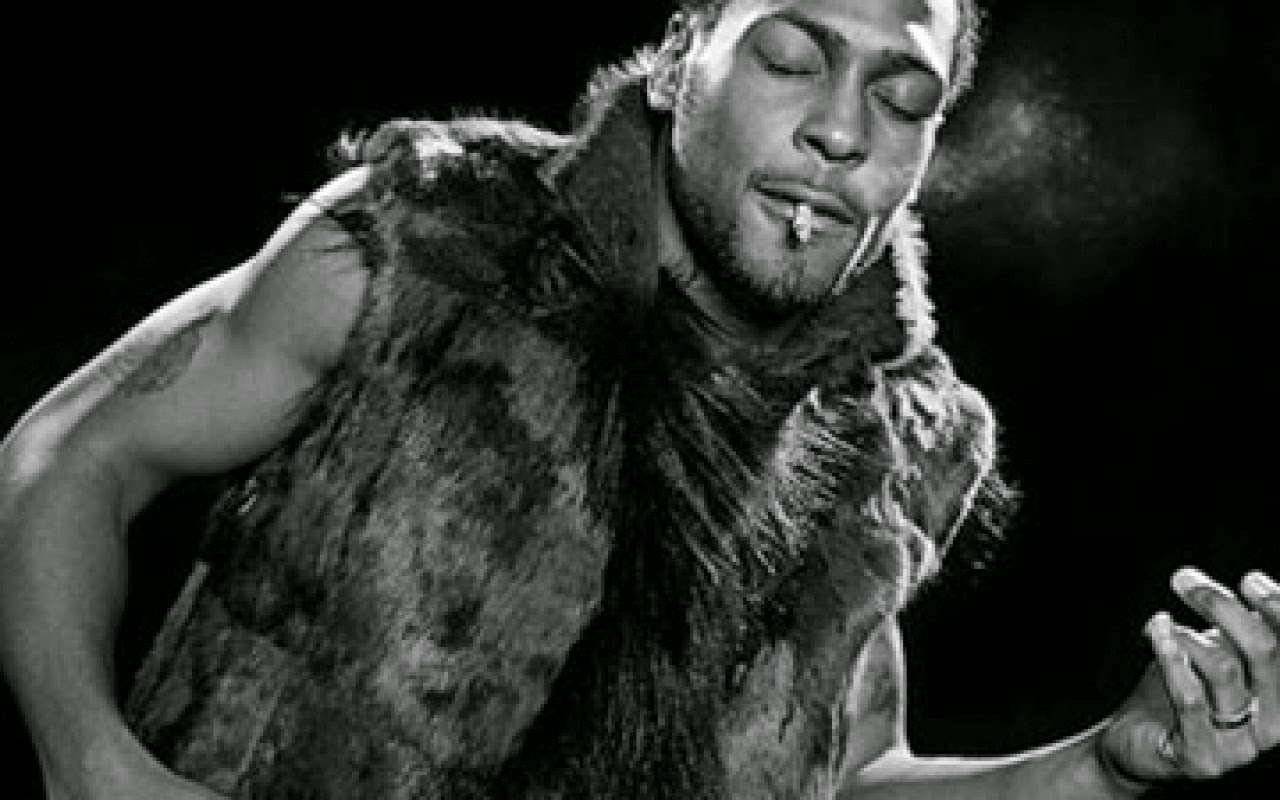 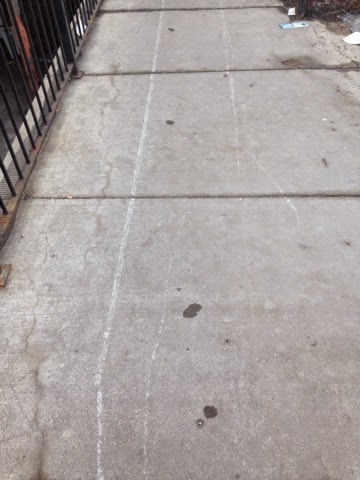 I came home late from work the other night and found a credenza. I dragged it scraping down the sidewalk waking neighbours. The next day you could still see the scrape marks on sidewalk. Two club kids came along and helped me get it into the apartment. It cleaned up pretty good. 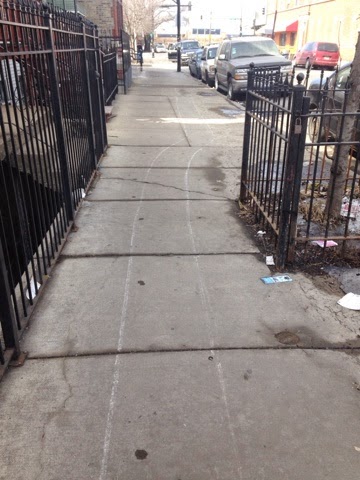 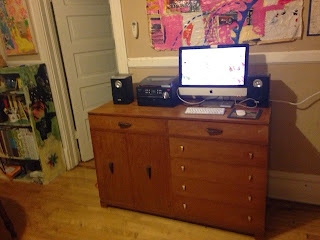 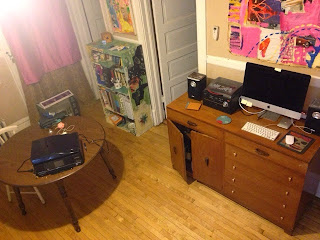 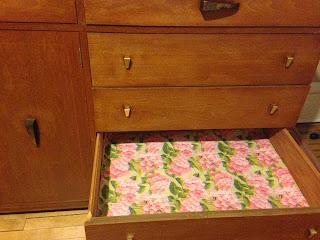 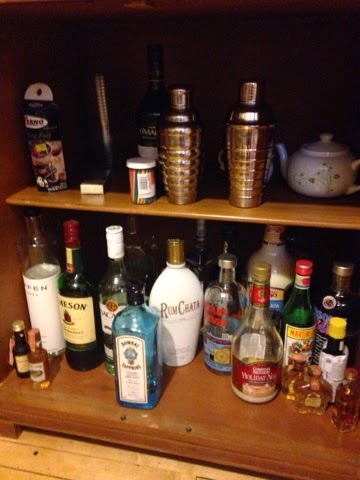 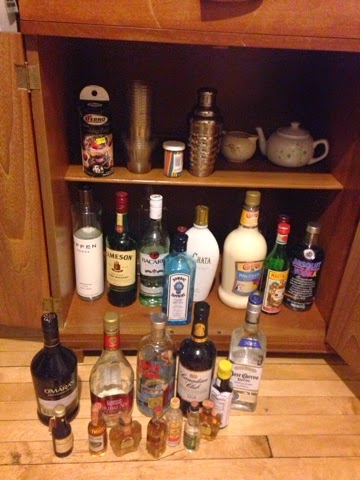 We added a soundtrack to the trailer for MAKING SEX. I am producing a compilation dvd which will include at least four of my short films and some other cool swag. I'm planning on having a dvd release party in Chicago, Toronto and London, Ontario (maybe?) and London England. 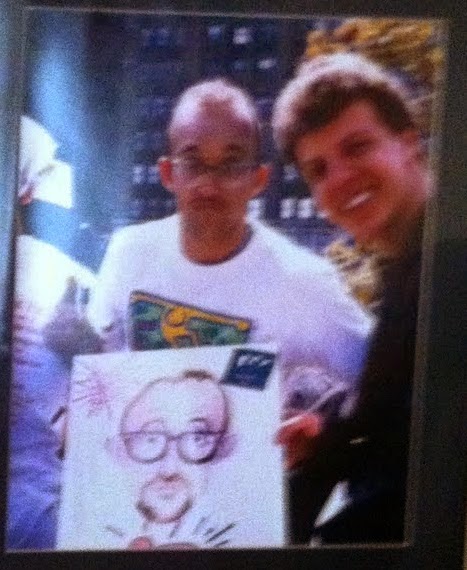 Two Paintings At My Friends House 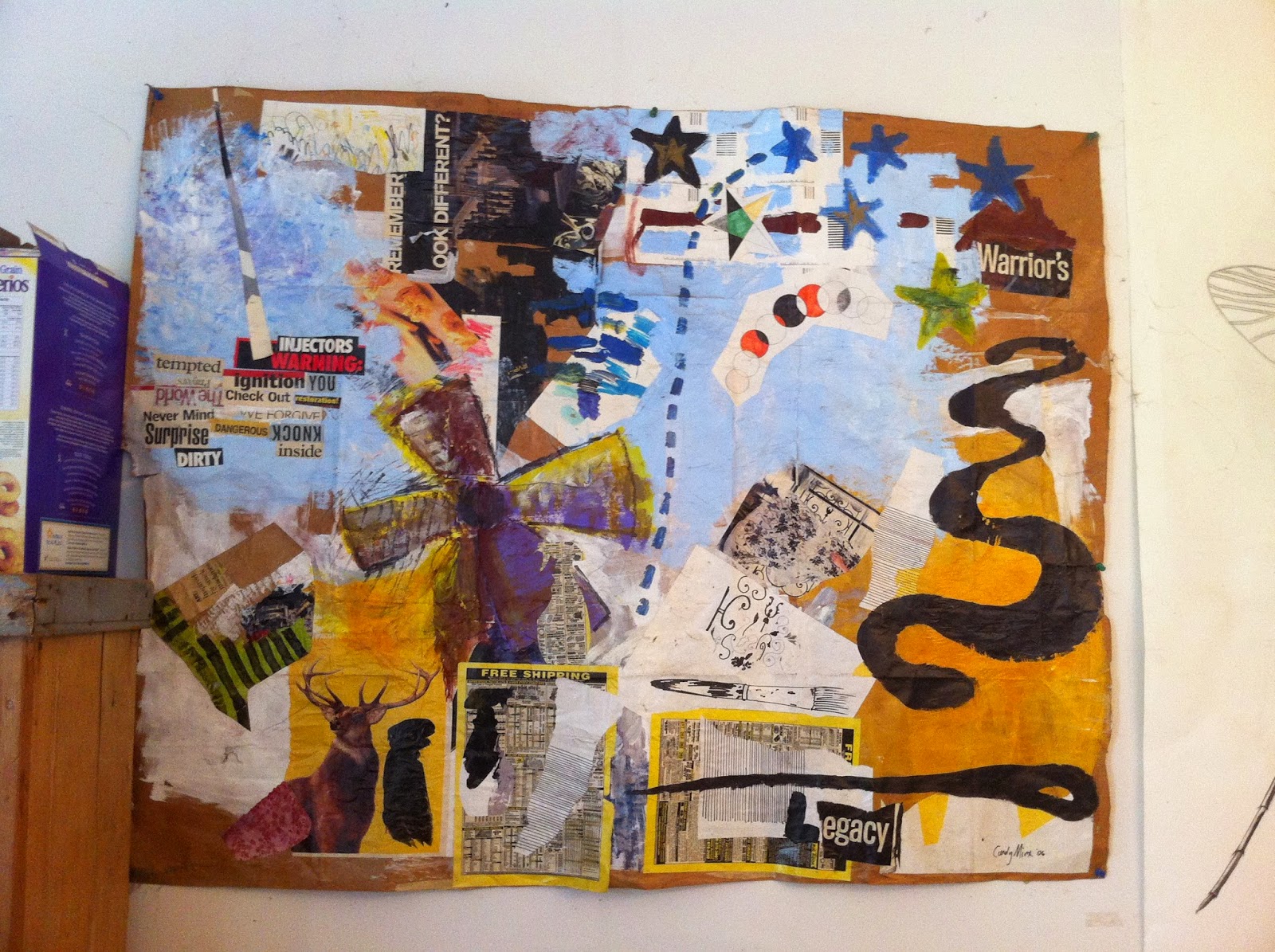 These are two old paintings at my friend Martina's house. The top one is from 2006. The bottom framed one s from...2000? Or 1998? Ish. One of the rare times I've framed something. Didn't John Cage said a frame is the enemy of art? 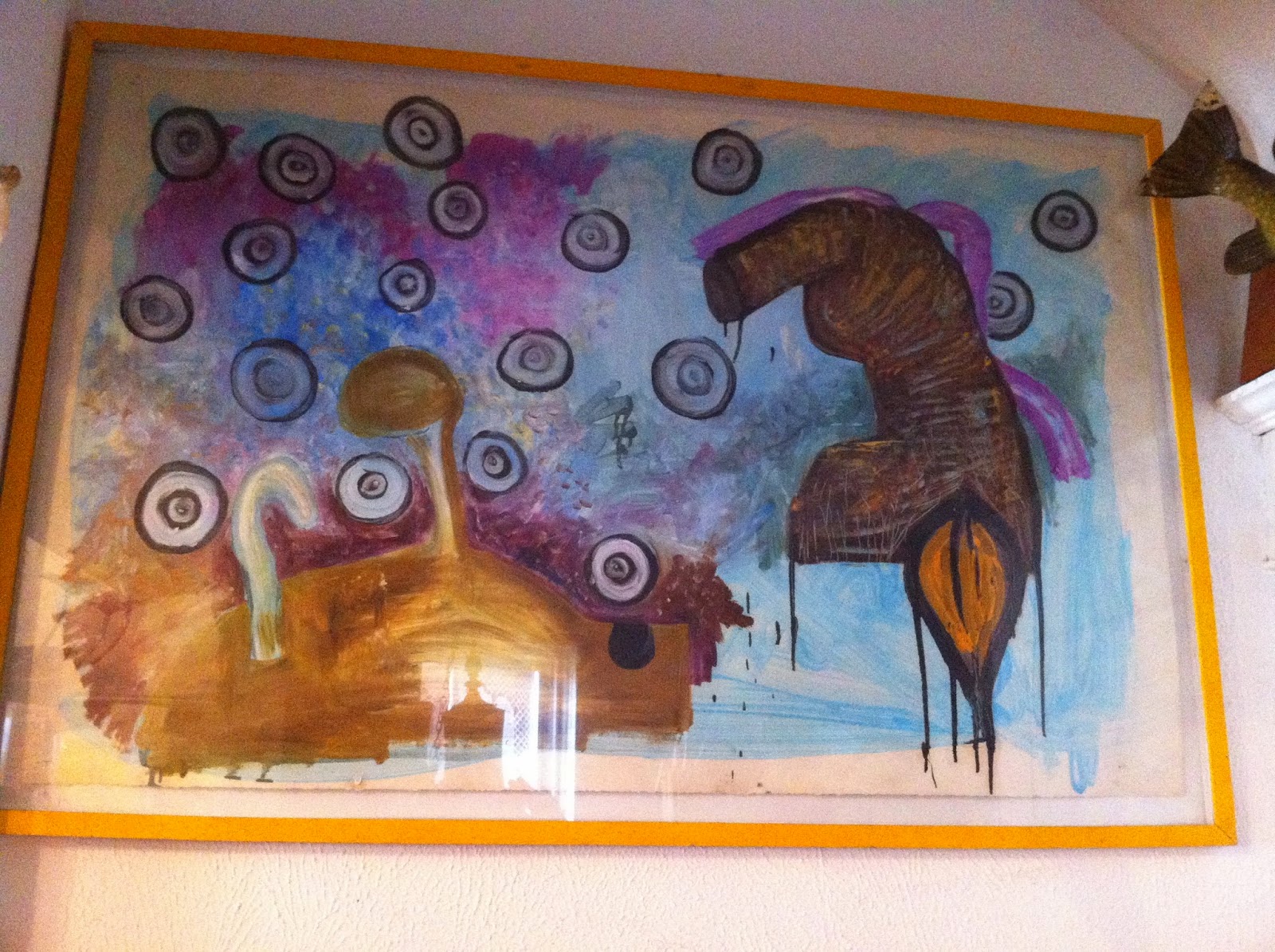 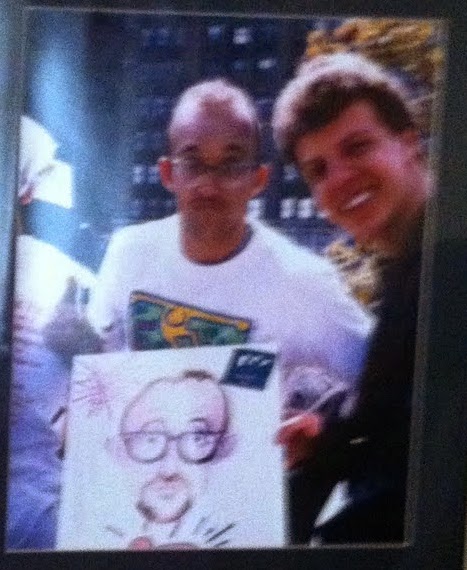 Stagg met Keith Haring when Haring was doing a huge mural in Chicago (where Millennium Park is now). He gave haring a drawing he did of him.
Posted by Candy Minx at 12:29 No comments: