I've been wanting to write a little bit about popular music, especially the songs I listen to on AM radio driving around Chicago. This summer I picked up several albums by fairly popular musicians...and I'd like to review them too.

I am a crazy big fan of Ke$ha...and Pitbull. And right now they have a song on the radio together so I think I'll start with the idea I've been playing with.

A year ago I was making a soundtrack for a short film. I wanted some country folk style music mixed with dance music. In 2007 I was learning square dancing with the LGBT Square Dance league and they danced to techno music. I thought that was fantastic. (here is Betsy laying down some banjo
which I later mixed into a dance track)
I wrote a note for entering movie festivals and it points out my interest in crossover music genres here is what I wrote

Recently two songs have come out on AM radio and they are huge and they both mix EDM and pop with country roots music. I made a joke to Stagg that I could imagine Pitbull and Ke$ha sitting around and saying "Well if Miley Cyrus is going to reject her country background and move to our turf on pop music...maybe we should make a country song."

At first, I thought the song used the most stereotypical lyrics we might associate with rednecks, or country folk music. They named the song "Timber" which is like a cartoon vision of a lumberjack or country person ..literally the most common obvious image of being in the country and foraging or eeking out a living. They have made the title and repetitive shout "Timber" a call to fight for their right to party! Timber is also a pun on a musical attribute the timber of a voice or an instrument. Timber also says they will warn their peers on radio and the dance club they are going to take no prisoners. The lyrics also incoprorate another stereotype of country music, the square dance and what comes to mind? "swing your partner round and round"...right? Well, so they throw this into the song too. And Timber also makes a reference to "wood". One of the verses sings "face down booty up timber". And really the power of the woman is here because timber is before the tree falls. The female narrator has the force to fall that wood. And this line is the main reason I love Ke$ha...and Pitbull. These two are very very funny! (I will write about Pitbulls albums in a future post)

I knew nothing about Ke$ha when I first saw her a few years ago on SATURDAY NIGHT LIVE. Actually, I disliked her on first impression. I didn't like her make up, her rough voice and she just seemed so...flaky. Boy was I wrong. I have come to realize she is immensely talented and has a real insight on the dance scene, on the lives of young women and her voice is really special to me now. Ke$ha uses a variety of vocal styles including rap, yodelling, and dance style with autotune, but she really does have an attractive voice. Her mother is a songwriter and they lived in Nashville after leaving California when Ke$ ha was younger. So Ke$ha really is Nashville!

A couple weeks ago, my husband, Stagg said, Candy you were way ahead of this country music EDM and pop music thing...look here's something in The Reader

I disagree with the judgemental dismissive opinion of the READER article, I think they missed the potential for this music crossover. I disagree that the author dismisses Pitbull as being a good musician (I think he's amazing). They describe the song as having "nagging harmonica", and their opinion that country and pop dance is an "odd combination"...but there is something much more exciting and important that Miles Raymer missed about songs like this one...

What I am fascinated about with this song and Avicii's "Wake Me Up" (post tomorrow) is that they are addressing the history of popular music by very intensely using country images, country lyrics and the crossover music scene is where some cutting edge music is occurring today. When the music crosses over...with a powerful female like Ke$ha into the world of right wing, fundamentalist music in United States we can hope that ideologies and political freedom for women and minorities may also be confronted and influence that barrier between people. Abortion, racism, elitism, agism and many other hot liberal concerns may begin to meet in the middle between political parties of young people.


[Ke$ha]
It's going down, I'm yelling timber
You better move, you better dance
Let's make a night, you won't remember
I'll be the one, you won't forget
wooooo oooooh

[Pitbull]
Look up in the sky, it's a bird, it's a plane
Nah, it's just me, ain't a damn thing changed
Live in hotels, swing on plane
Blessed to say, money ain't a thing
Club jumping like Lebron, now, Voli
Order me another round, homie
We about to climb, wild, 'cause it's about to go down

Good short film please check this out....
The interviews are fascinating about the violence and images....
http://m.youtube.com/watch?v=V6dyp_rwuqI&desktop_uri=%2Fwatch%3Fv%3DV6dyp_rwuqI
Posted by Candy Minx at 16:49 No comments:

Stagg and I had some paintings for saleat my work tonight... It's open houseat OLD TOWN SCHOOL of FOLKMUSIC we also had some treatsand laundry soap for sale that wemade. 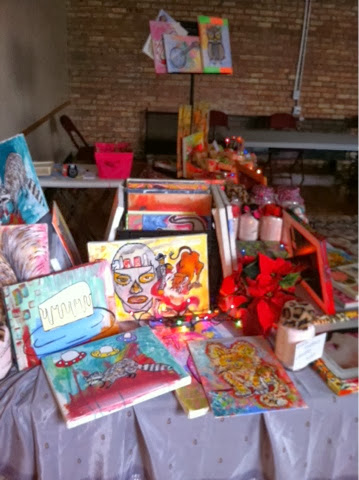