Hanging Out With McCarthy Group 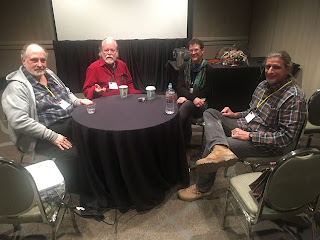 I've had trouble posting on my blog for the last couple weeks and I'm quite surprised this post worked finally! I couldn't load pics. Here is a photo of a roundtable in the McCarthy section of conference. "Revisiting McCarthy At The Border". From left to right, Rick Wallach, Allen Josephs, Katherine Sugg, and Wallis R. Sanborn III. 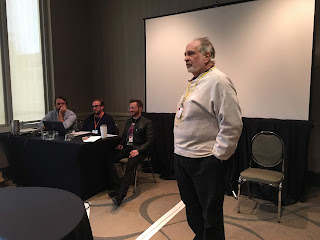 Rick Wallach introducing another session called ""McCarthy and Mexico". Seated Christian Carter, Katherine Sugg and Allen Josephs. Their presentations were titled "An Economy of Violence: Saltillo Prison Capitalism and Carcinal Arbitrariness" by Carter. And.."The Horror of Mexico in McCarthy and Bolano" by Sugg. 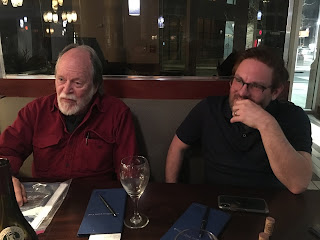 Allen Josephs and our new friend James. James and I found ourselves at all the Indigenous panels. And then he showed up at McCarthy panels. The rest is history! These two with Stagg and I went out for (lackluster unfortunately) French food on our last evening. There are at least 8 French restaurants in Albuquerque...and Stagg really wanted to start checking them out. Next time we will choose the one downtown.
Posted by Candy Minx at 17:53 No comments:

MURDER BY NUMBERS: The Artificial Intelligence in the Astronomy of Cormac McCarthy’s BLOOD MERIDIAN

Blood Meridian is a system transmitting astronomical information while using decorative language to embed even more information without distracting the reader with burdensome mathematics unless the reader themself decides to be initiated into an art tradition also found in stupas, Shakespeare and Migration Period Art. Bringing interdisciplinary mediums together I am going to create a small film presentation to introduce the idea of repeated motifs in two of McCarthy’s written pieces for film. This film section of my presentation will focus on the astronomical motifs in The Counselor and No Country For Old Men. Contrasting with the film presentation will be  a three dimensional essay in the form of a stupa I have built and decorated in such a way to clearly demonstrate the mathematical aspects of these Asian artifacts. Closing out the presentation will be the written argument about embedding information in McCarthy while bringing cohesiveness to the three segments of my presentation.

Stupas contain a fractal geometry found in nature, such as trees and rocks, and in art such as Jackson Pollock and pixel movies. I will argue that Blood Meridian has a fractal geometry defined by a small feature being a ratio of the whole form. The idea of a small feature being repeated to create a larger whole with the same qualities is a valuable technique to embed a sensory object with intellectual or navigational information that records and transmits knowledge. I am going to argue that McCarthy has been creating objects that are within a tradition at least as far back in history as stupas.

When McCarthy says “one thing can be another” he is saying we can transmit one idea inside another format. I will introduce the art criticism horror vacui as one of the ways in which information was recorded creating objects that were valuable to migrating peoples suggesting McCarthy’s novel of westward expansion has utilized a specific history of craftwork. Horror vacui (fear of empty space) was a criticism arising from Victorian art considered cluttered and claustrophobic and has been applied to lowbrow art movements. More aesthetically valued art which also fills the entire frame with decoration and motifs include Outsider art, fractal art, Persian art and Migration Period art.

I will discuss how stupas are an early manifestation of artificial intelligence since they are designed to mimic the meditating Buddha, containing complex numerical features monitoring celestial movements and the time of day. A stupa is an object that has layers of one thing meaning another by layering an oral tradition of philosophical biography onto an object of directionality. A stupa’s design is a geographic diagram of the solar cycle. I will demonstrate that Blood Meridian is functioning in the same manner. Blood Meridian contains at least 517 uses of numbers and exploring the number eight compares the novel to stupa designs based on four-sided shapes that help calculate sums of eight. Like the Buddha portrayal in stupas, characters are also part of embedding celestial information in art. Shakespeare’s Sonnet 117 disparages disloyalty and mirrors earlier sonnets about betrayal and separation. This poem directs us how to approach betrayal and loss as literary metaphors for celestial movement in Blood Meridian.

Artificial intelligence is revered falsely for being innovative because precedence has been untaught. When community is included in knowing what art means and it’s purposes through apprenticeship and education the community benefits from the tradition of embedding mathematical and astronomical information into artifacts. We are in the so-called golden age of artificial intelligence yet we have lost the personal value of art because we have lost the tradition of teaching about intelligence layered within decorative motifs and mnemonics in art, poetry and storytelling for hundreds of years.