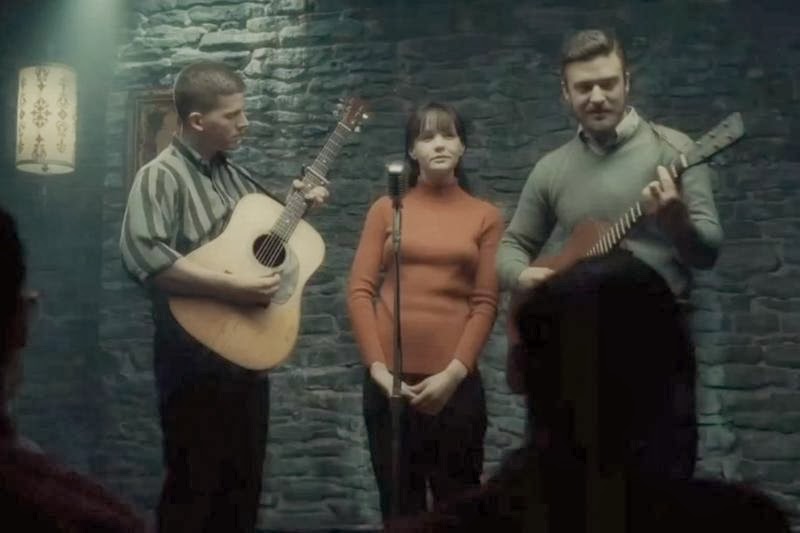 "He's a prick in a business of pricks" F. Murray Abrams on his character Grossman.

INSIDE LLEWIN DAVIS is a comedy. But not a fall down laughing comedy. Not Judd Apatow or Will Ferrell comedy.

This is existential comedy. And the philosophy of absurdism argues that the human mind struggling for value and meaning in life is also incapable of finding such. We are screwed and we should laugh about this tension. This movie is about a guy who is fairly talented and may even turn out to be an okay guy but is having a very bad week. We find out that Llewyn Davis was part of a singing duo and his partner has killed himself. We never find out why his partner kills himself in not in flashbacks not in dialoque ...but I believe we can surmise that the kind of week we witness is the kind of shit that can break a persons spirit.  And we may also find out that an artists spirit may break at least by a week like this one. There is no reason to assume "bad luck" has just occurred worse this week than other week. And so is our human opportunity to laugh or to cry.

There are many layers to this movie though on one level it is a bitter story of an ungrateful selfish man among a bunch of phony "hipsters" in New York in 1960.  Llewyn Davis' worse attribute is he sees these phonies for who they are much like Holden Caufield and he can't be diplomatic.For him, diplomacy is phony and a sell out and compromises his folk ethos. He partly seems to think he is better than others one minute and then the next he is making jokes about language and success. So on the superfical layer of the movie, it is filmed dark, with dark brooding angry characters and overall the movie seems to be a commentary on American concept of success.

As well as a critique of notions of success the movie can also be a critique of communities based on faith and ideals in a capitalistic economy. Existentialism is the only sane attitude.

The entire movie has repetitive language and lines of dialoque. I thought about counting how many times "make a living" was said. At least three or four I think. We know the movie is concerned with cyclical time because it's told in a flashback the opening scene is also the last scene and many images mess with our heads about the sense of time. Several characters look so much like each other it's hard not to think the Coen Bros. did this casting on purpose...adding to an incantatory feeling. After the movie Stagg says it's like a folk song. Well damn...he was so correct. We watched a documentary about making the movie and if T Bone Burnett doesn't say it's constructed like a folk song!!! Go Stagg!

This is a very sad movie. Yet, how can such a sad set of events be funny? I think this movie will grow on you with repeated viewings because it is a mobius strip like another brilliant movie Lynch's LOST HIGHWAY. The construction of the story is simple and yet it's meaning is attained by meditations and reverie...and like folk music by repetitive playing.

A fascinating contrast between "folk music" being free and then the variables of "talent" that plays and interprets these traditional songs... Then mix it with people who want to make money. The contrast between commercial-music-making-machines of record producers and club owners versus the people who practice music and perform becomes the root of an absurdist existential story with classic colourful characters. Any one of the characters in this film would be a riot to hang out with however several of these New York "wanabe hipsters" and "authentic hipsters" surrounding our hero Llewyn Daivis they become creepy soul-sucking monsters. Either musicians are innocent angels new to the business or they are cruel assholes judging other genres of music or judging someone who has ideals. Being an artist becomes a totally impossible double bind.

At the end of the movie we wonder what all great literature asks...to be or not to be? If you can accept the cruel Buster Keaton-esque joke of the universe then you're ready to be an artist. If you can't then you'll jump off a bridge. The cruelty of a money-based prove-your-hip-credentials of the music business (and arts and literature) is if you jump off a bridge it better be the appropriately cool bridge. Ouch Cohen Bros, thanks for the painful laugh.

The actors are incredible. I am hopelessly crazy about Carey Mulligan, and Oscar Isaac is a new favourite. And Justin Timberlake is turning out to be nothing less than as good as Frank Sinatra. 10/10.

$40 to visit Downton Abbey. So glad to see the short documentary of the real location "Highclere Castle" after the finale. Great metaphor for England's economy that relies on tourism. How clever of Julian Fellowes to write about his friends Estate providing them both with livelihood. Where farming subsidized the rich families after WW1, now art is maintaining the grounds. In my first year class of art at university of Victoria , our prof, sculptor Maury Baden, taught us about Calimity Brown. He suggested landscaping was an art form. How exciting to see Downton Abbey grounds were designed by Brown!
About this season; loved Daisy storyline, could not believe there was a Mosely narrative. Daisy is"chuffed till next summer". Yay!  Glad Mrs Bates is getting better. Clothes were great except for Roses coming out dress. What was with those puffy fabric hips? Mary's two suitors reveal was pretty good. Single women should date at least two men at a time it keeps them all on their toes. Loved to watch the battle of wits between United States and England with Giamatti!! Got verklempt that all the staff wanted for their day off was to go to the beach. Carson and Hughes were delightful.
Posted by Candy Minx at 11:39 No comments:

This video is directed and animated by a co-workers girlfriend. I love the art work and I love the music!
Posted by Candy Minx at 17:55 No comments:

I love pirate movies from silent era through Flynn to Polanski to Depp. Just love the genre. Very powerful to see the kind of crazy daring and violence done so disturbingly around fear. I love the puzzle-solving. Hanks is always watchable and strong…, but this was different.

This really has been a season of sad movies. To see the comparison of despair in Somalia laid next to films of despair like OUT  OF THE FURNACE and so many others. I loved the ship in the movie. Having grown up beside those kinds of container ships I love the familiar colours of the rust, of the metal paint, the sheer confusing massiveness of them…(try kayaking in a harbour front full of those moving mammoths!…that’s life in Vancouver). One time as a kid in Kitimat… Our family got to spend an evening on a huge ship like the one in movie… And we had a huge dinner with the captain and a tour… And we watched a movie on board. Movies were a huge part of the culture on the ship. I was fascinated that they had reels of movies, a projector and a theatre. …guess what? I still remember what movie my sister and I watched…”butterflies are free”.

I thought it was so magical they had a movie library! This was before home movie systems and it just seemed so decadent. I guess my point here is that this kind of contrast between a ship like the Maersk Alabama in CAPTAIN PHILLIPS (so much more high tech now…) To the tech the pirates use. I felt real sick fear when the pirates pull up to the ship and just toss a wiry ladder and board. At that moment the resourcefulness and simplicity of the pirates is utterly frightening.

And it’s so sad how the economic implications play out in the movie. We go for oil in Somalia and then command these huge vessels right past them… So rude. What do we expect?

However the life and death game the captain has to play with the pirates is very exciting. And the viewer can bond with both the captive and captors is so well done.

I broke down to tears when he is rescued. Hanks state of shock was so real feeling. His understated acting was perfect.

You know that urban myth about the guy who goes home with a woman he meets in a bar… He wakes up in a hotel the next morning in a tub filled with ice with an I’ve in his arm and a note and a cell phone? The note says “dial 911…your kidneys have been removed”

I thought 12 YEARS A SLAVE was an incredible story. I was gripped from the very beginning. I can’t say I liked everything about it as a movie… There were some things that bothered me with the flashbacks…. But it didn’t really matter… The content and the story and characters just were what were important to me. I was very caught up and terribly stressed out. I had to turn the DVD to pause a few times and move around.

But the story made up for this at least in my opinion.

I had no idea there was a kidnapping subtext to life for African Americans… I was sickened. I can’t believe anyone would have gone with strangers in the scenario of this movie….I would have thought everyone would be afraid. It certainly made me afraid and reminded me of that urban myth. I thought all the actors were outstanding. Such a good story and I’m more in love with brad Pitt than ever…lol