Fast-food outlets are cultural institutions dedicated not only to dealing swiftly with mankind's compulsion to eat and drink regularly, but also to doing battle with his twin and fatal limitations of space and time. The campaign is waged with weapons of the industrial and technological age; its driving force is our own particular and paradoxical blend of obsessive rationality and relaxed asceticism.

Fast foods are processed and sold by giant industrial complexes which control every detail of their operations, from the smallest ingredient to the carefully calculated appearance of every eating place. The goal is to give an impression of the omnipresence and invariability of McDonalds or Kentucky Fried.: travel as far as you like, and it will always be as though you were still at home, in the arms of the parent company. Space loses its ancient association with change and surprise. You can without difficulty seek out the identical ambience, the very same taste you knew and liked before you set out.

Those parent companies are called "chains." When you travel (and mobility is another of our cultural institutions), they provide links which render your route as predictable and secure, as protective and as limiting as swaddling bands. It is no accident that both the kind of food they sell and their marketing methods make a direct appeal to the infantile in all of us. "Chains" stretch out along the highways, where they supply food as efficiently and as swiftly as gas from a fuel pump. They also, by means of their repetitiveness, bind and homogenize city neighbourhoods. They supply in large measure modern man's apparent need to obliterate the difference between "this place" and "that", and "then."

Uniformity, as every chain retailer is aware, makes good economic sense. Mass sales and ease of packaging and handling merchandise demand predictability-standard quality being , in the end, only one aspect of the sameness required. Everybody gets the same list of choices, everywhere, unless élitist notions, such as distaste for sweetness or demands for the personal touch, intrude. The aim is to please most people, and not to truckle to the difficult or pretentious few. The tastes of children are catered to especially. Grown-ups simple eat-and enjoy-what their children like. Abundant wrappings and boxes proclaim technologically perfected hygiene and simultaneously suggest a child's party with  presents. Taste blandness also flattens to differences among adults: there is no strong "weird" flavors creating exclusive group preferences and societal distinctions.

speed of service not only attacks the time limitation, it forestalls an increasingly widespread incapacity to be kept waiting, even if waiting might be a prerequisite for superior food. Speed also helps make certain that hierarchal formality cannot arise. Formality stratifies by organizing space and relationship, and to do this it takes time. It is true that we are "served" from behind a counter, and that the preparation and "further processing" which any single food item has undergone is achieved only through the expertise of an army of scientists and marketing agents and the toil of a host of machine operators-but we never see any of this. We witness only the swiftly and smartly performed final step as the food is handed to us, cartoned and wrapped, crumbled and sandwiched. There is no involvement with the personel of the restaurant/ Everything is impersonal; the very language used in ordering and serving may be pre-learned, almost ritualized. The method prevents time wasting and possibly complex exchanges, and irrelevant chat. It is all so honed-down, rational, ad predictable that it is difficult to imagine how we could further mechanize the process.

Margeret Visser, MUCH DEPENDS ON DINNER

Why Do We Have Sleep Problems?

Why do some of us have trouble with sleep?

Because we are afraid to die.

It's goes back a long time and is one of our most practical fears rooted in our evolution. We don't understand this unless we look for clues under the surface of language and who we think we are, and how we misunderstand images about ourselves.

We can answer part of this issue by looking at one particular word we use about sleep. "Falling asleep". There you have it. Problems with sleep are deeply rooted in a fear of falling. You know that old stereotype drawing of the "march of man"? That figure is an urban myth and totally bad science. We didn't separate from our other primate cousins as knuckle-draggers. We actually, like many primates, lived in trees.

"The march of progress is the canonical representation of evolution – the one picture immediately grasped and viscerally understood by all.... The straitjacket of linear advance goes beyond iconography to the definition of evolution: the word itself becomes a synonym for progress.... [But] life is a copiously branching bush, continually pruned by the grim reaper of extinction, not a ladder of predictable progress." Stephen Jay Gould 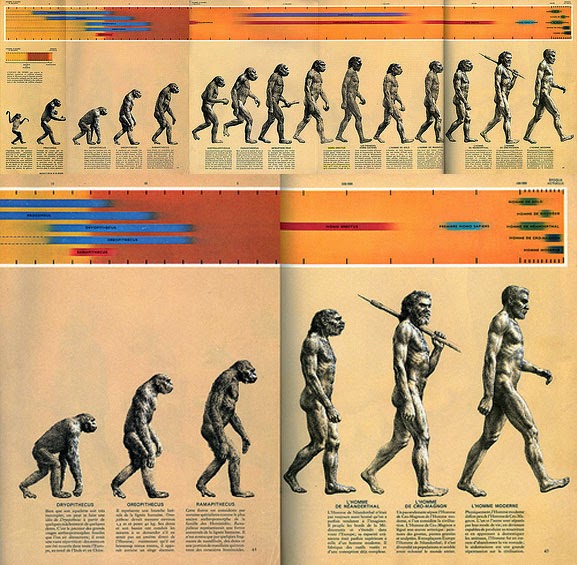 We use the word "falling" for a couple of metaphors in our life. Often, people who have trouble falling asleep also have trouble falling in love. The reason we use the word falling for both sleep and love is because there is a physiological connection between the two. We need to "let go" when we fall asleep or when we fall in love. We let go of the day and an awake alertness in order to fall asleep. And we let go of our own self-invested interests when we fall in love. Both of these acts of "letting go" can be disrupted when we feel threatened or stressed. The reason for this is because we used to live in trees. It is our physical fear of falling and either breaking an arm, or dying from a fall, or being attacked by a predator that we have a fear of falling.

In some societies, especially capitalist societies, the definition of freedom and success is deeply associated with the individual and the ego. In North America we find that personal philosophies and lifestyles support the individual rather than the group. So falling in love can be very threatening to people. In order to maintain a capitalistic lifestyle and philosophy demands a lot of personal motivation to succeed.

The fear of falling asleep and falling in love also relate to a "fear of commitment". Just the word commitment is associated with mental illness (committed to an asylum/hospital) and surrender is related to commitment in that letting go is giving in to something/someone else. When we have a strongly ego-based,  individual-based culture sleep is compromised for many because it is against our primate nature to live as an individual outside a community....even metaphorically.

If we don't recognize the connection between our ego and "letting go" and combined with our family dynamic and how our families define freedom, love, letting go, and success....we may experience a dis-connect between sleep and love.

Our unconscious unresolved issues from childhood can manifest in cleverly disguised devices. Like being in relationships with commitment-phobe partners, or married people, or long-distant relationships. or excessive traveling for work, or drinking heavily, or substance abuse, over-eating, gaming, and many others activities that become dangerous if done too much.

The fear of falling is from a million years ago in our past, manifests unhealthily with unresolved connections. Fear of falling is ultimately a fear of death. Living in a  conspicuous consumption, capitalistic, patriarchal culture triggers "falling fears". This sort of economic dysfunction triggers our unconscious fear of death (falling).

North American society triggers a fear of falling because attempting to maintain and achieve the lifestyle demands a disconnect from community.

Primates are made to live and  thrive when they spend time with each other, sharing food, sharing resources, sharing stories and images. When we have an economy that creates hierarchy and divide among individuals with extreme internal competition an unbalanced fear of death will manifest via fear of falling in love and asleep.

Now that we know this...what do we do about it? We need to find things in our life that not only reveal the history of the words we use, but also the patterns of our ego. Threatening our sense of individualness and our ego also triggers a fear of falling and love. So we need to find a way to challenge our sense of reality without scaring our selves yet...the ego must be challenged in order to lower it's power of controlling our thoughts. The ego is in cahoots with social structures in North America. How do we shake loose from this control system? Well, talking about it helps. So does exercise, meditation, volunteer work and spending time with loved ones, and studying things about our own minds and lives that are tricking us into letting a fear of death hold us back from living as a sharing cooperating community.