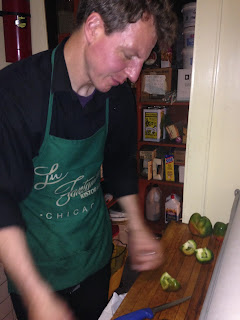 We roperd Stagg into helping at one of my jobs this past week...he chopped peppers for 10 hours!!! 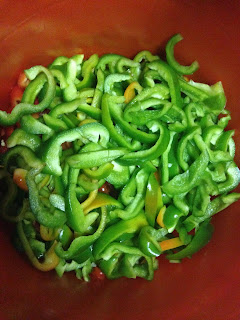 I am doing the online course for film noir on TCM. 8 weeks, so cool! #NoirSummer

The camera position seems to be in a secluded viewpoint. As if we, the viewer were hiding and watching. Very voyueristic feeling. Also, there is a feeling of very quiet courtyard despite the children playing. No adults at first visible. Then the camera tilts up, again as if we are hiding and watching for adults. We see women doing laundry. The children are playing a game in which they count and then dis-count and eliminate a player from a  circle.
The mothers discuss how annoying the children morbid song lyrics are in the game but they also agree that as long as they are singing they know they are safe. This riffs on the idea that the mothers are identifying, and accounting for their children. When children play in groups or do school trips together it is common for adults to take a head count. This sense of paying attention to the numbers and amount of children to keep safe, gives a sense of importance to how valuable their numbers are and keeping track of children. This also is a very urban kind of worldview where large populations can obscure our catering and watching of our children.
The poster of the murderer-at-large confirms and justifies the mothers fears of keeping track of their children. The little girl seems so vulnerable playing with her ball when we mostly only see the figures of adults around her, but few face. Then the silhouette of a stranger overtop the murder poster shows us how we can not see the person...possibly the murderer could be anyone and this is so frightening and effective at putting fear into us observing.
Posted by Candy Minx at 21:32 5 comments:

And Even More Workshops And Learning! 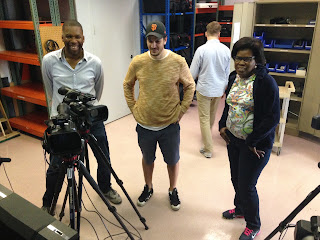 If it wasn't enough to be gilding an historic house museum this week, I also had scheduled more camera operating classes. The thing with ilm that is different than painting is the kind of practice that the material is innovative every couple of years....but for the most part, once I learned how to use paint....it stays the same. However with film, the technology changes all the time. So you have to have workshops if you want to feel comfortable with the equipment...and also to be able to rent equipment. You can't rent camera and film equipment at most places unless you are qualified. I belong to three tim cooperatives and societies....they offer workshops and training all the time. 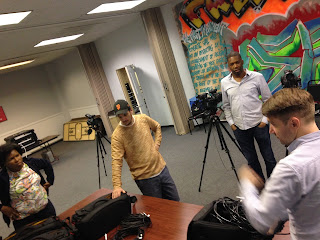 So here are the other people in our workshop this month. We spent a lot of the day wrapping up the equipment, winding and unwilling cables and cords and pressing buttons ha ha ha! Just checking that equipment works and is set up takes a lot of time. A lot of filmmaking is concerned with phone calls, time, (scheduling, be punctual, and the actual film is based on time) and set up and break down of equipment. 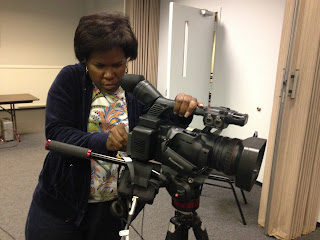 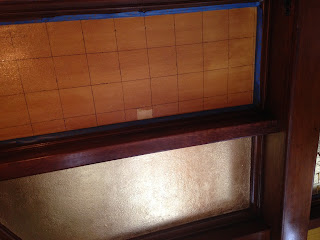 This week, my good friend Martina has been in town for a Gilding Conference. Yes, she gilds things, all kinds of things. So every couple of years gilders get together and learn new mad skills. Today I got to witness, and participate in a  volunteer project gilding a museum in downtown Chicago. Wow!

Above photo you can see the before and after. 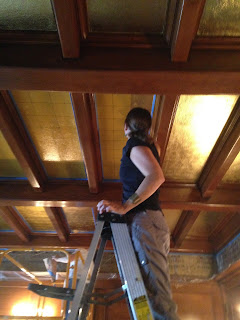 Here is one of the conference participants, and professions gold/gild artist and tradesperson up on a ladder applying gold leaf to the damaged ceiling. The former work was flawed or damaged....and this project allows people to help out and learn. It was pretty amazing to be able to be in a  museum when it was closed and see this work being done. 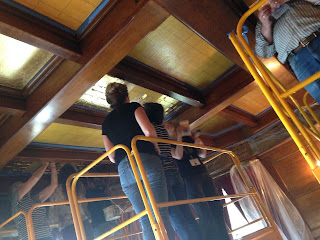 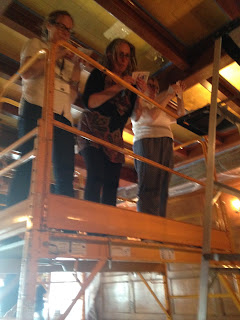 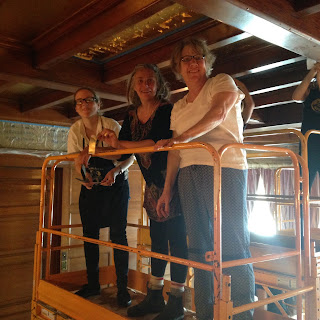 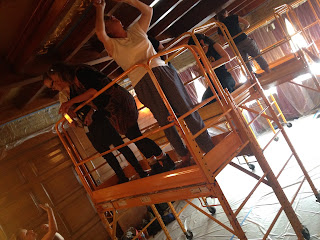 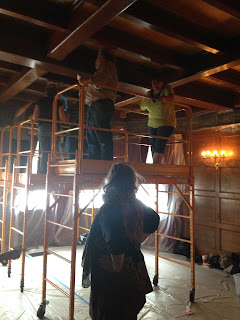 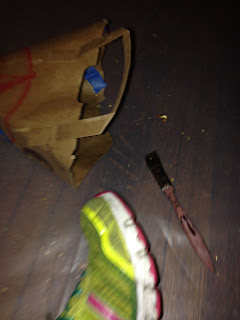 I was able to help out. My first job was to pick up gold leaf that flys off the ceiling or drops as it's being applied. All the bits that fall off or are "skewered" (extra overlapping  gold leaf) are reclaimed and recycled. The gold can be melted and cleaned and turned into ignots. So I used a cone bag....which was purposed into a cone from a paper shopping bag. I used a paint brush to gather the fallen gold leaf. 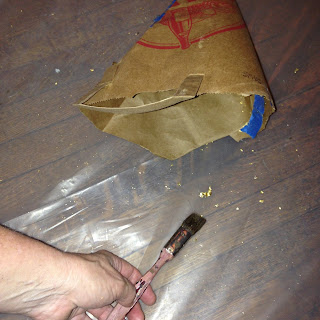 See, the little bits of gold on the floor? Thats what gets recycled. 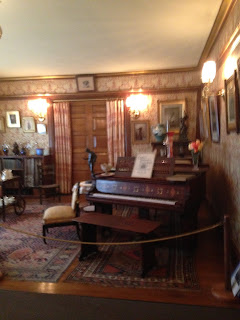 The museum is The Gleaner House....which was built in late 1800's...I'll post a link later. You can see that it is a fully furnished and from a huge rich family...and it is massive. 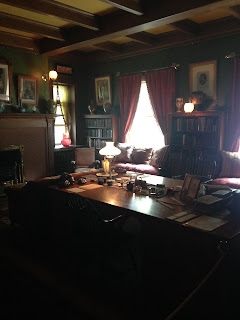 Here is the whole gang! We were working from 10-4 so of course we went for a break and lunch. After lunch I climbed up on the scaffolding and was gilding all afternoon. We are going back tomorrow morning for another day of work. 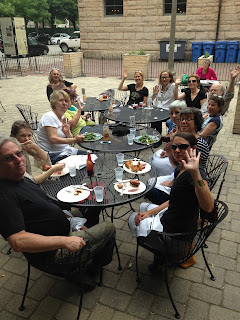