How Cute Is Cormac!?


Ed Tom Bell: How many of those things you got now?
Ellis: Cats? Several. Well, depends what you mean by got. Some are half-wild, and some are just outlaws.
Ed Tom Bell: That man that shot you died in prison.
Ellis: Angola. Yeah...
Ed Tom Bell: What you'd done he had been released?
Ellis: Oh, I dunno. Nothing. Wouldn't be no point in it.
Ed Tom Bell: I'm kinda surprised to hear you say that.
Ellis: Well all the time ya spend trying to get back what's been took from ya, more is going out the door. After a while you just have to try to get a tourniquet on it. Your granddad never asked me to sign on as a deputy.
Ed Tom Bell: I always figured when I got older, God would sorta come inta my life somehow. And he didn't. I don't blame him. If I was him I would have the same opinion of me that he does.
Ellis: You can't stop what's comin'. It ain't all waitin' on you. That's vanity. 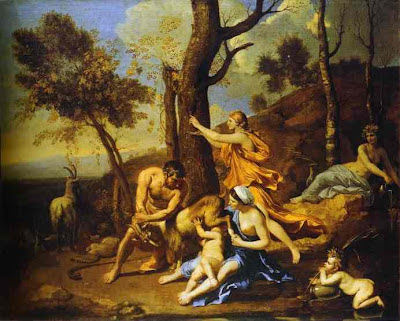 The Nurture of Jupiter (1635) by Nicolas Poussin depicts Zeus breaking off a horn. We can find the relevance of horns in many cultures around the world. From Italy and Roman mythology came the idea of the unicorn. Universally the horn represents abundance, the female anatomy and power for life/abundance and containment-perhaps the phallic for shape and seed, a vessel for drinking, for holding flowers, for protecting fire and is used as a lantern. The horn is also a symbol/reminder of Capricorn, and winter solstice the season metaphorically for old age and wisdom.

Notice that in the earlier dialogue Sheriff Tom Bell's Uncle Ellis makes a reference to a tourniquet because what we try retrieve stolen from us keeps slipping away...(what is stolen? pride? soul? life? compare Citizen Kane who compulsively tries to replace his loss of childhood with objects)

In Europe many romances and myths are related to an ancient story of Father Horn. A significant love-relationship, usually ending in marriage, is not only integral to romance as a genre but also to the hero's development. Typically, the hero will fall in love with a high-born woman, whom he marries only after significant obstacles impeding their union have been overcome. The reason these women figure so prominently, in fact, has mostly to do with heterosexual love and courtship. Yet the hero is not always the active pursuer and agent, nor is his female counterpart always the hapless damsel in distress. As if demonstrating the inherent power of transformation, gender roles can surprisingly reverse themselves in romance. At the end of No Country For Old Men an example of gender play reversal occurs between the Sheriff and his wife when she reminds him that he may be retired, but she is not. (The Vietnam vet also makes a comment about himself being retired, his wife works at a Superstore)

Loretta Bell: How'd you sleep?
Ed Tom Bell: I don't know. I had dreams.
Loretta Bell: Well you got time for 'em now. Anything interesting?
Ed Tom Bell: They always is to the party concerned.
Loretta Bell: Ed Tom? I'll be polite.
Ed Tom Bell: All right then. Two of 'em. Both had my father in 'em. It's peculiar. I'm older now than he ever was by twenty years. So, in a sense, he's the younger man. Anyway the first one I don't remember too well but it was about meeting him in town somewheres and he gave me some money. I think I lost it. The second one, it was like we was both back in the older times, and I was ahorseback, going through the mountains of a night, going through this pass in the mountains. It was cold and there was snow on the ground and he would rode past me and kept on going, never said nothing going by, just rode on past, and he had his blanket wrapped around him and his head down. When he rode past I seen he was carrying fire in a horn the way people used to do and I, I could see the horn from the light inside of it, about the color of the moon. And in the dream I knew that he was going on ahead, and he was fixing to make a fire somewhere out there in all that dark and all that cold... And I knew that whenever I got there he'd be there... Then I woke up.
Posted by Candy Minx at 07:12

I didn't the plot of "No Country For Old Men" until recently. It sounds like it's similar to the film noir movies of the 40s and 50s that I enjoy.

You know...Cormac McCarthy isn't really known for plots...in fact his plots are often very simple structurally and he has more complex characters and references. This movie based on one of his novels is like a slow version of a film noir...I think it's more because of the distilled yet meaningful dialoque.

I didn't like No Country, to me it was profoundly disturbing, emphasizing a hopelessness - - - but now I want to see it again.

Interesting post - the horn also figures prominently in the Old Testament - the Shofar which is made out of a ram's horn and has the most awesome, moving sound.....I am thinking there are meanings there that may not have been completely explored..

Gardenia...the movie and novel are typical for McCarthy...he has simple plots and layers in meaning...and often morally ambiguous or difficult endings. Sometimes hisstories you gotta take a small scrap of hope out of chaos.In one of his novels it isso unrelenting violence...the only glimmer of hope is found in the human spirit when a character says to a villan "you ain't nothing". That's it. Thats all we got as a reader!


OSCAR BRINGS OUT THE BEST

When No Country for Old Men collected the evening's ultimate prize, Cormac McCarthy, who wrote the novel on which the movie is based, was the first out of his seat to give directors and producers Joel Coen and Ethan Coen a standing ovation.

Hours earlier, while the Kodak Theatre lobby bustled with stars, the famously reclusive author quietly slipped into the theater and sat alone with young son John. Approached tentatively because he is famously averse to interviews, McCarthy proved to be gracious and outgoing. His thoughts about all of this? "What's there to say — I'm at the Oscars and I'm not even in the film business!" His son nodded enthusiastically. "It should be fun. It should be trippy."

McCarthy said he was amazed that Hollywood decided to adapt the book with its unconventional ending. "I'm just glad people didn't run screaming from the theater," he said, chuckling.

The Coens' reaction to the night? "They really don't get any greater than this," Joel Coen said.

Caz just said "Come to bed" and I've got the horn.

This is probably not relevant but I seem to remember a horn somewhere?