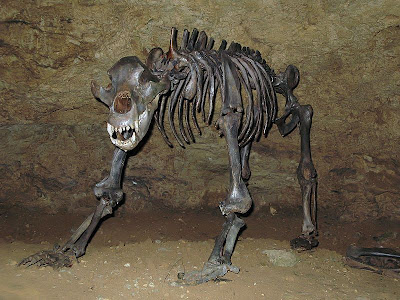 I've heard it said that our first reading, our first narratives, were tracking animals. "Reading" where they walked, slept, ate, and lived. I've also heard director Werner Herzog say that artists need to make as many images as possibble we need more and more images and there aren't enough in the world...perhaps especially to compete with contemporary images mass produced like advertising?

Werner Herzog's documentary Cave Of Forgotten Dreams offers many strange combinations of images. His small film team of three was allowed access to Chauvet caves in France that have highly restricted visitor protocol due to the fragility of the interiors of the cave. This cave was discoverted by someone feeling the air coming out of the rocks in the 1990's. We had no idea there were these particular caves with gorgeous rock interiors but also human paintings. We didn't know they were there until those gusts of air were noticed by people hiking in the cliffs and beautiful area featured in the documentary.

The film is narrated by Herzog who has a raspy intense voice and accent which compliments the feeling of lost resolutions contained in the movie. By lost resolutions I mean that we are so removed from primal experience watching a film to see these caves. And by how little we have dialogue about art, nature and knowledge in our contemporary lives. For interpreting the content of this documentary, the science, the art, geography and then the medium....we are given highly specialized professionals, archeologists (trying to understand "art"), perfume masters (trying to find more caves), computer mathematicians (trying to not have anxiety attacks from the art and cave), and a famous Film Director (trying to film awe and inspiration) as our tour guides to the caves, who speak French, narrated by a German American, with subtitles, told we are very unlikely to ever get our own selves into these caves...and so the "interpretation" begins. I felt this documentary offered as much insight into the "mysteries" of art criticism and mystique as the mysteries of the ancient art work contained in the caves. Immediately, whether intended or not, I thought this movie was a great metaphor for how we distill and transmit, and ration "knowledge" and information. A great metaphor for how art is often segregated, cabalistic and removed from general population.

I felt very sad that the only way we might "see" these paintings from 30,000 years ago was through the eyes of ecentric scientists. It seemed every bit as alienating and elitist as "seeing" art in galleries and museums propoganda pamphlets or through the minds of art critics.

But listen....I'm being a big ol bummer here...the doc protrays the art wonderfully. The director is obviously awed and inspired by the art as are the scientists, it is a very delightful documentary. In fact, there is a fair bit of comedy and I had several really good laughs during the movie. Herzog has a wonderful sense of humour.

I love documentary movies and as much as I love them, I also believe they have hit a kind of formula in many ways. There is a format that dozens of docs take, it is highly enterttyaining and informative and often quite hilarious...but its still a formula.

Herzog's "Cave" documantary is not formulaic. It is refreshingly weird. No, I mean WEIRD. Close ups in 3D of folks who are so obsessed with their work they forget grooming, they are willing to stare longingly into the camera, and experiment with ancient tools and quite happily they risk being rather silly looking. Contrasted with stunning nature surrounding the caves, and then THE ART WORK...this is a different sort of documantary. Herzog values human emotion as much as just the facts and this honours the human being.

This doc is not for everyone, it is ironic, humourous, bittersweet, corny, and a bit long with the usual serious kind of soundtrack that accompanies nature images (the "serious nature soundtrack" is my main criticism yet....it is also funny). The movie is self-conscious about the history of documentaries, of it's forced elitism or attempts to make understandable complicated topics for mass comprehension (is that what docs do? ha ha) not just due to class or money or status but a new kind of exclusivity...nature preservation. I believe a one note viewing of this movie won't serve up much more than the images of the art...but that is enough. If you look at the Platonian layers of the cave and storytelling and who is responsible for sharing stories, nation borders, conservation, knowledge and art...you might find your own daydreams.

The art work is humbling and beautiful. No, the delicate drawings brought tears to my eyes in the very beginning of the film. I thought "These much be fake!" And then I was shit, these are so amazing. I felt right away I knew the people who drew them, they were my people. That these were drawn 30,000 years ago just is exhilarating to me. The cave itself is also gorgeous.

We learn by watching animals. I thought...maybe we began drawing because we saw that the bears were drawing first.
Posted by Candy Minx at 10:01

'Animals know how to live'

My animals are cats and they eat cat food.

Having smelt the muck regularly I can only conclude that animals will eat anything and I would prefer death.

Well...perhaps curried cat food at a pinch....enough spices and who knows?...;-)

Har har! Wonderful to see you Four dinners...I've missed you! And you silly monkey, cat food is meat! xxooo