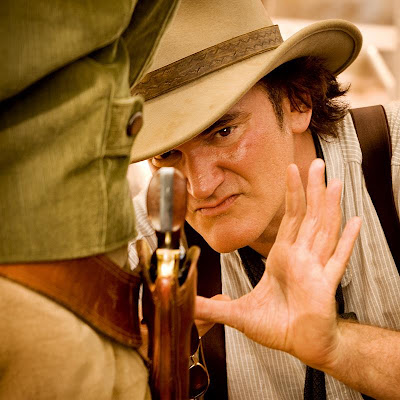 “I wanted to use the vinyl I’ve been listening to for years – complete with all the pops and cracks. I even kept the sound of the needle being put down on the record. Basically because I wanted people’s experience to be the same as mine when they hear this soundtrack for the first time." Quentin Tarantino

I made a Coco-Cola Brisket Stew which we ate for breakfast yesterday...and then apple pie and ice-cream...and then we went downtown to see Django Unchained. I believe this was a straight up made with love classic Western movie, of the kind I loved seeing growing up...the kind of movie as a girl I fell in love with the cowboys and felt the betrayal of the bad guys and the need for redemption. Tarantino's new movie gives us this emotional loss and payback and all kinds of fun action on the way.

I love Kerry Washington and was so glad to have such a strong powerful female actor in this movie up against and with so many intense male characters. Oh the characters and acting is fantastic! Samuel L. Jackson seemed unrecognizable to me. I kept forgetting most of the actors were famous...they were so engaged in their roles. I expected Di Caprio to be good, but he was really maybe the best he's ever been. The surprise of all was how much I got into Jaimie Foxx. I love Jaimie Foxx, but I wasn't sure how he would carry the movie. The movie, the plot, the payoff and deliverance of the story...demands we MUST care about this character Django really depended heavily on Foxx's performance. Django Unchained gave me the feeling I had so many years of watching my old favourites in this genre...movies like Billy Jack, Walking Tall, Death Wish, Coffy, Straw Dogs, Taxi Driver, Carrie, Bring Me The Head of Alfredo Garcia and so many more...

Why were these movies so popular and meaningful to their audiences? A lot of young people loved these movies at the time because many of them felt injustice. Hatred and bigotry for different colours and races, for gender, for economic status...and those issues have not changed as much as we might like to believe. A lot yes, but they still are there... Django Unchained is absolutely a knot in a string of these movies of the past. Django is right on the same rope. The plot depends upon character...which is also a catalyst as the revenge movies of the 70s. These characters want to control themselves, to control events. But what happens is that no matter how hard a character tries to be someone else, or control themselves, or hold back...their true selves, their true colours will surface.

This works on the bad guys as well as the good guys. We had the most delightful audience. A terrific thing about going to an opening day show of Tarantino's movies is that it's a room filled with movie lovers and fans. And there is applause, cheering, screen talking and a massive community energy in the theatre. Tarantino is one of the few directors who inspires movie audiences to behave like old-school movie audiences...it's really terrific. At one point when a particular character gets shot...a woman yells out "Dumb ass!". It was delightful! He really was a dumbass and he deserved to be shot. These days so many of us feel we can't get justice at our jobs, or in our government, or in daily life as simple as someone acting with care and courtesy driving.

Studying history can create even more sense of injustice...what if WE were there we say to ourselves...how would I live or act? Some of us really wish we could turn back the clock and take a stand...we want to be a Django. Acting out our revenge fantasies in real life...not good. But having the sense that such injustices from sexism, to racism, to corporate bosses not taking care of their staff...the communal emotion of a movie theatre audience and a movie gives us the feeling we are not paranoid. We are not alone...we are not imagining that the potential for injustice is something we can only have in hindsight. We hope there was a guy like Django in real history. We hope we can do the right thing in our regular lives...even though we kind of know the house always wins.

The audience wants payback. And Tarantino not only knows that...he showed so much respect to the history and crime of slavery by delivering the payback. Sometimes it is enough that we have release and deliverance from art, if not real life. And this is a mystery of artmaking Tarantino understands.
Posted by Candy Minx at 16:05