Is It Possible Canada Might Finally Have Another Decent Prime Minister? 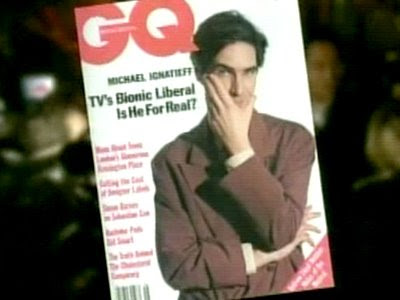 I mean this man is called a "public intellectual" in fancy magazines. He has everything...why on earth would he want the crummy job of politics.

Now listen...I haven't always agreed with everything Michael Ignatieff has written in his philosophical works, sometimes I REALLY haven't agreed with his perspective... but I have a huge respect for his thinking and his books. The Right's Revolution, The Russian Album , Blood and Belonging: Journeys Into the New Nationalism , Warrior's Honour: Ethnic War and the Modern Conscience, and I even met him at a film party once. (yes, he's even made films..what?!) This guy is a force of nature...in a brainiac sort of way. And he has been able to apologize for some of his mistakes publicly and he gets my respect for being openminded and listening to his peers: us.

Here are a few things he has said in writing...

"As a former denizen of Harvard, I've had to learn that a sense of reality doesn't always flourish in elite institutions. It is the street virtue par excellence. Bus drivers can display a shrewder grasp of what's what than Nobel Prize winners. The only way any of us can improve our grasp of reality is to confront the world every day and learn, mostly from our mistakes, what works and what doesn't. Yet even lengthy experience can fail us in life and in politics. Experience can imprison decision-makers in worn-out solutions while blinding them to the untried remedy that does the trick.

Having taught political science myself, I have to say the discipline promises more than it can deliver. In practical politics, there is no science of decision-making. The vital judgments a politician makes every day are about people: whom to trust, whom to believe and whom to avoid. The question of loyalty arises daily: Who will betray and who will stay true? Having good judgment in these matters, having a sound sense of reality, requires trusting some very unscientific intuitions about people.

A sense of reality is not just a sense of the world as it is, but as it might be. Like great artists, great politicians see possibilities others cannot and then seek to turn them into realities. To bring the new into being, a politician needs a sense of timing, of when to leap and when to remain still. Bismarck famously remarked that political judgment was the ability to hear, before anyone else, the distant hoofbeats of the horse of history." Michael Ignatieff in the New York Times article "Getting Iraq Wrong".

(A slightly different side of Ignatieff is something he wrote about the public mourning for Princess Diana. Maybe the UK Posse of Red and Nowt will find this interesting?) Muppie and Gardenia and anyone who has gotten involved in political campaigns might find all of his stuff interesting.

"Rights alone cannot create community feeling - you need a common history and shared experience for that. But living in a rights culture can deepen one component of community, which is trust. It's not full loving trust of the kind you get in good families or happy marriages. A rights culture is properly poised between faith and suspicion: we trust each other just enough to argue out our differences, but not so much as to forget the possibility that others may be tempted to tread upon our rights."

"Human-rights commitments are on the outermost arc of our obligations, but they can be only as strong as our innermost commitments."

"Rights are not abstractions. They are the very heart of our community and the very core of our values. We have them because those who went before us fought for them, and in some cases died for them. Our commitment to rights is a commitment to our ancestors. We owe it to them to maintain the vitality of the right to dissent, the right to belong, and the right to be different." ...from his speech...The Right's Revolution

Is it possible we might have a philosopher king in our future? A real public servant?

Eat your heart out Harper!
Posted by Candy Minx at 04:17

That is awsome. Glad to hear you met him in person. That is even neater I think..

I hope you're right Candy. Mr. Ignatieff is the MP in our area, Etobicoke-Lakeshore, and I voted for him in the last election. Still I can't help but have a little trepidation about having an academic who has spent most of the past 40 years living outside of Canada as our Prime Minister.

I hope you're right.

I will have to do some reading of his books - what wonderful, inventive, forward thinking, out of the box people are he and Obama. Could it be a trend that some are getting involved in politics to actually serve, rather than use? Woo hoo!

Oh I think that is totally cool that he lived in Europe and stuff. I think it is a happy anecdote to that close-minded Harper. I am stilla Canadian...and I can't see how one can take that out of ourselves...although the leaders in the last twenty years have tried very hard to do so...

I have never voted Liberal...and I am no fan of the Liberal party...but having said that...I don't like most political parties so take it with a grain of sand.

I am guessing that the voices of Rae and Ignatieff are going to flavour and heal the Liberal party...and at least bring it to the 20th century.

I think someone entering politics from outside is very healthy. Did you know in Amnesty Internatinal...you don't work on your home country...you work for other countires.

The idea is that you can't see the crimes when you are inside the same matrix.

My concerns for Ignatieff are that he has made some serious blunders. He is awfully tight with England...he supported Iraq invasion...but he actulally had a paradigm shift and apologized. He had to evolve his compassiona nd thinking about torture for accussed terrorists. I mean he has had some majr stumbling blocks.

But...he seems like a person who investigates himself, the world, is curious and he is open-minded.

I think curiousity and open mindeness are two critical things Canada needs in a public servant.

I hope Gardenia, that people like Obama and Ignatieff getting into public service is a new trend for North America. It was a tradition for many Canadian politics in the past.

Our country was raped by Mulrooney who had Reagans pants around his mouth much like Harpers has with Bush.

I hope we are putting that behind us.

Boy I'm glad to read this. I do like what I've seen and heard so far.

It's about time we finally got a good one. And you're darn right, we've already had the bottom of the barrel with the conservatives.

I hope so too, Candy, that would give me hope for the future!

Some did side with going into Iraq - but when false information was what they had to go on - well - - - I hope Obama does some revamping of our intelligence - well, he will - I'm encouraged by the support he is selecting - strong people who think for themselves -

Candy, thanks for posting this, I'm almost afraid to hope that we might actually have an interesting and intelligent leader for a change. Exciting stuff...