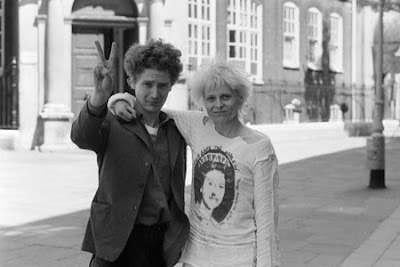 McLaren saved music. He saved music for me at least when I was becoming cynical with lots of bands. Well, way back then, for six months of my life..I was becoming cynical period...and along came a designer, musician, artist, promoter, provocateur very much who was able to translate a massive ennui into a seize the day rip apart culture for those of us who felt we just didn't fit into our society. The Blank generation...Generation X, the damned and alienated are just some of the labels that Malcolm McClaren was able to interpret and reflect through music and clothing. He hung out and worked with The New York Dolls, Richard Hell, Tom Verlaine and sexy young assassins. When I saw the movie The Great Rock And Roll Swindle I saw how to live in such a terrible world and not hate it. I thank McCLaren (and of course, The Sex Pistols) for helping me learn how to think for myself...even if it seemed inpossible to experience freedom in our corporate, money-grubbing society. We could try.

McLaren would have been a master artist if he had stopped with his clothing designs, his S&M fashion with the brilliant Vivienne Westwood, Adam Ant, Bow Wow Wow but he also had a solo recording career making some of the best dance music. I wore out the album with Madame Butterfly (above) on it...in my car...at home, at the nightclub I worked at...and Buffalo Girls and Double Dutch from the brilliant album Duck Rock....were also pivotal songs for an era mixing hip-hop into nightclubs everywhere.

Thanks Malcolm McClaren for a soundtrack to my youth.

RIP indeed, I have an inherent appreciation for anyone involved in starting a movement or in this case, a riot

McLaren was, like all of us, something of a contradiction. But he was always interesting and doing new stuff. A master.