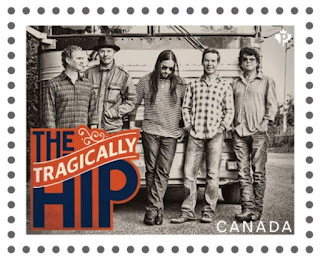 I'm so glad we went to Kingston last summer to hang out and party with The Tragically Hip and other fans outside in the street. We knew it was epic and we had to be there. There's no fucking crying in rock and roll....so we didn't even though we knew Good Downie was fighting cancer. He was there ehe was signing. There are no tears in rock and roll bitches. Dance! So we cheered and danced and the crowd was incredible and so much love was felt and shared. The Tragically Hip is really one of the greatest bands I've seen live...and I've seen some doozies (Bowie, Prince, The Clash, Soundgarden.) I'm not sure which is the best concert experience I've had with The Tragically Hip but it is probably the night before the Olympic Gold hockey games in Utah. They played a last minute show at Lee's Palace announced word-of-mouth and on the radio. Four of us raced to Lee's Palace...taking time off work...trying to grab warm clothes. And we stood outside of Lee's Palace in freezing rain for hours to get a coveted wrist band. I was wearing a fun-fur coat. Bad choice. I may have looked amazing but that thing soaked up all the rain. Frezing rain. We got our wrist bands and literally had an hour to kill before going into the venue so of course we found a bar and got drinks...and tried to lay our soaking clothes out to dry. After pounding back a couple of beer we put our wet clothes back on and got into Lee's Palace. Wow. They totally killed it. And right after the show the band as flying to Utah to play the closing ceremony after the hockey game for gold. That fed the audiences fervor, for real. An incredible concert. I seem to remember that I had to throw my fun-fur coat out the next day it was just mincemeat.

I drove my car down to NYC to crash at a friends place in 2000 because The Hip were playing Central Park on Canada Day. I couldn't even sleep unless I knew I would be at that show. I had just bought a little Suzuki Swift....like, a day before driving south and I was pretty nervous. I left late in the day and had to sleep in fast food place parking lot. I woke up next to a motorhome with a bunch of guys going home after Gay Pride day in Toronto. It was so funny just crawling out of our vehicles exhausted. I actually had bartended Gay Pride and I was so tired as that might be the toughest job I've ever done. But awesome! I got to NYC and my friends said "I'm going to London for two weeks. Heres the keys to my place you can stay the whole 2 weeks if you want." I wanted. I borrowed his bike to ride from his apartment on Avenue A to Central Park. That in itself was an experience and a half. When I got to the park....it was crazy and I did manage to be one of the first dozen people lining up. We had a blast. We had beer garden and flats of cardboard which the guys in the front row kept bringing us loads of beer. The opening acts were Jeff Healey and Great Big Sea. The audience was truly insane and crazy. I have no idea why these bands were playing Central Park on Canada Day.....but cops were asking me why? Are you guys having a revolution? The NYPD was a hoot. I was sitting with these guys I met in line who had been in college when the Hip played their school and they were lifers. I can not believe I not only locked my borrowed bike in Central Park but that I drove through Manhattan loaded. This was the first couple of days I spent in NYC alone in the lower east side and this was the groundwork for an amazing time there.

Somehow The Tragically Hp never really made it as bigg in the United States as some other Canadian bands. It's a bit of a mystery but I have two theories. One, is that they were sort of similar to REM. And the market can't really sustain two bands who are similar. And two, they didn't tour as much as their peers Blue Rodeo and Barenaked Ladies. Barenaked Ladies played most of the year on the road to every college. They showed up on Regis and Kathie Lee. The Hip didn't. Blue Rodeo played in Hollywood movies. The Hip didn't.

Maybe it's because Good Downie and the boys were too busy being amazing with community building, playing hockey, writing poetry and making family life while serving as activists and trying to convey the importance of indigenous peoples. I don't know.

Concerts are one thing but I have so many specific memories of listening to the Hip. One really good memory is being on a road trip with my friend Mister Anchovy. We ldrove from Alberta south to Yellowstone Park and through the "Top-of-the World highway. We listened to a lot of blues, Dylan and the Hip. I remember flying through mountains in Montana blaring "At Hundreth Meridian."

What a fantastic band who wrote such emotional and fun songs...some of the best albums for road trips ever. Here is the set list from Canada Day in Central Park: