Lake Erie and The Garden of the Great Spirit 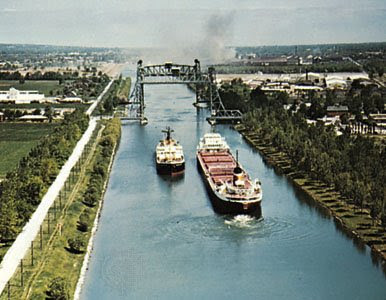 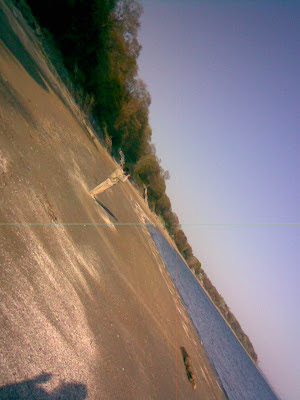 Took a trip to Lake Erie this week and saw an area of Ontario I had no idea existed. In this photo of my friend George dressed kind of like Lee Majors...we walked with a friend of his who has a beautiful house in an unusual enclave of mansions owned mostly by rich Americans. Above on the cliffs where George is standing are these massive un-winterised houses, HUGE. In the acres behind the beach in the woods are to be found many pleasant walking areas...and tennis courts. These rich folks really love their tennis. I enjoyed seeing this very different snack bracket. We went out for dinner in the town of Port Colbourne...actually above you can see a picture of the Welland Canal and we sat on the side of the canal and could see tankers going from one inland lake to another. When I was a kid I was completely fascinated by the canal system that allows huge deliveries and exports of goods between the Great Lakes of America and Canada and the St. Lawrence Seaway. 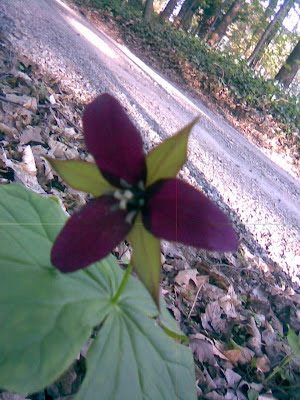 A rare red triliium in the forest above the beach. Lake Erie is shallow and a fantastic place for swimming and beach visits.

Trillium grandiflorum has been studied extensively by ecologists due to a number of unique features it possess. It is a representative example of a plant whose seeds are spread through myrmecochory, or ant-mediated dispersal, which is effective in increasing the plant's ability to outcross, but ineffective in bringing the plant very far. This has led ecologists to question how it and similar plants were able to survive glaciation events during the ice ages. The height of the species has also been shown to be an effective index of how intense foraging by deer is in a particular area.

Some forms of the species have pink instead of white petals, while others with extra petals, also called "double" forms, are naturally quite common in the species, and these are especially popular with Trillium gardeners. In fact, the species is the most popular of its genus in cultivation, which has led to conservation concerns due to the majority of commercially available plants being collected from the wild. A few regional governments in Canada and the United States have declared the plant vulnerable as a result. As the plant is attractive and well known, it serves as the provincial emblem of Ontario, the state wild flower of Ohio, and it is often used in heraldry in Canada. from Wikipedia

Although I find the construction and engineering still an acheivement and such...and I do like the idea of sharing goods I don't have the innocence of childhood and don't believe in moving rivers or irrgating anymore...in many ways I see these canals and the St.Lawrence as scars on Canada's land...is it still The Garden of the Great Spirit"...I'd like to see the land and water given back to the garden of the Great Spirit...
Posted by Candy Minx at 14:58

Humankind make scars. It's what we're good at.

At least these 'scars' were made with good intent.

Well, yes, you're right Manic Preacher...and certainly...humans are animals within nature. We are animals though whose history of survival is to make decisions and choices.

I love that YouTube film and I do enjoy many of the engineering feats humans have done as means to share products and comforts. Absolutely...in many ways it's not a "fault" or "blame" but we are also capable of learning and changing.

I used to love ranches and horseback riding and countryside. But I don't love it anymore...I've grown out of it because I can not reconcile the knowledge that those formats are not good for "gthe garden".

There is an incredible author who writes about the changes in landscape and farms and environment...he wrote "the last great place" about 15 years ago about Montana. It's a beautiful book and he writes as a former rancher. Very interesting stuff.