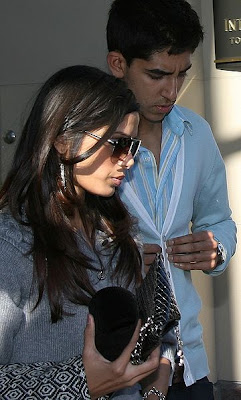 "If you want to get laid, go to college. If you want an education, go to the library."
— Frank Zappa

Regis Philbin was promoting Slumdog Millionaire quite ahead of the word of mouth. He had been to a special premiere and couldn't stop raving about the movie. I had figured he'd be a good judge since he was the original host of the reality program Who Wants To Be A Millionaire?. If you've ever wondered why reality tv is so popular, Slumdog Millionaire gives a good demonstration. I suppose it is obviuos why I like this film so much. I don't give much respect to cookie-cutter education or school and I enjoy the study of diversity in learning styles. I set a tone of exploration on the topic of learning here at my blog almost from the first post. I don't want to abolish schools or anything I'm just not romantic about school or conventional education. I think the education matrix is a kind of bullshit system. School is a way to prove people can jump through hoops. Trying to look at the industrial society anthropologically we see that formal education is taking up more and more of peoples time. We are keeping young people in school longer in order to keep them out of the work force and competing with older people for jobs. We've almost lost the notion of university as "universe city". Apprenticeship and practice have lost status to high-cost privately paid tuitions. University is a status symbol and packaged by marketers for consumers. University originally meant "a community of teachers and scholars". We have so little regard for learning now that we make teachers beg for their money.
$$$$$$$$$$$$

So along comes a movie that directly addresses the illusion of the value of learning within strict formats like school. Slumdog Millionaire is also brilliant by contrasting our contemporary ethical concerns with torture to the popular reality tv show Millionaire with its own interrogation methods lit in fetishistic blues. Contrasted with the yellow lit scenes: condemning those institutions as cowardly that enforce schooling and how we measure intelligence? (I like this contrast much more than the same pattern used in Traffic). An all round great movie and I think it will, and should, get the "best film Oscar" this month. I love this movie because it reminds us how limited mainstream industrial society defines intelligence and learning. I love this movie because it's a fantastic story with wonderful characters. Experience is the best school....but this movie is the best argument for why school should be available and subsidized for everyone. Score: 10/10. 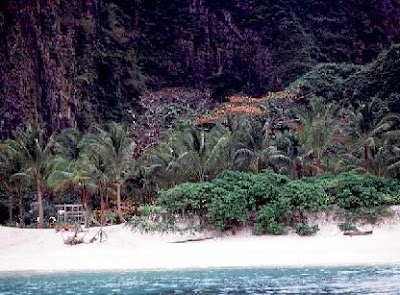 If Slumdog Millionaire is Dickens for hipsters then The Beach is Lord Of The Flies for hipsters. This is because Danny Boyle is nothing if not hip. Oddly, I'd never seen The Beach till a couple of weeks ago. And at least half a dozen times, bar customers of mine over the years..talking movies is a great pastime on a quiet night for a bartender...had recommended I see this movie. It just kind of slipped past me.

The movie had gotten more or less panned and didn't stay around in theatres for very long at it's release.

The thing is...this is a totally cool movie. DiCapirio plays a backpacker who hears of a international "urban" myth about an island with all the pot you could want and all the rave music to chill by with kindred spirits. I loved the montages, the editing, Tilda Swinton (whats not to love about Tilda?) and the fucking incredible location.

I also hadn't been so disturbed and frightened by some of the scenes in the movie since SawII. No I don't want to go swimming, thank you very much. I saw this about two three weeks ago...and I'm still creeped out. Score:8/10.

Still, controversy rages. As filming on the island finished and restoration began in early February, The Beach was hit by another storm. Shooting last week at a waterfall in Khao Yai National Park northeast of Bangkok brought a cascade of new charges. That the park would be closed, the waterfall dammed to increase flows and so on. "To be honest, the reaction has been shocking, and quite unnerving," says producer Andrew Macdonald. "There have been so many false and ridiculous accusations. Accusations of damaging the coral and using pesticides. Then, there have been accusations of bribery. This is outrageous, totally false."

Macdonald points out that all work on the island has been under the supervision of a Thai forestry worker and an environmentalist, not to mention a botanist brought from Britain to oversee replanting of the native species. Still, in hindsight, he concedes, "maybe things should have been done different." In fact, The Beach's damage-control has been disastrous. Movie-makers began by trying to gag all information about the film, closing the site, which fueled suspicion. When things went from bad to worse, the public-relations machine began rolling out releases, including love letters from Leo to Thailand. It was too little, too late. And when they responded to ecological concerns, it was with a statement from a reef-monitoring group that had to be corrected a half-dozen times over petty matters, like the titles of the people involved. From here 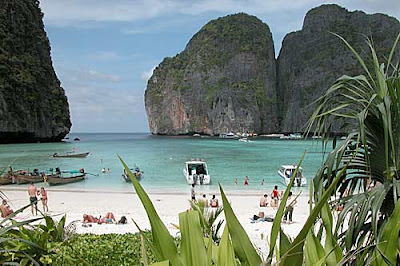 I really enjoyed Slumdog. I agree with you about seeing a different educational perspective, and I though that structuring the movie around that kid's learning experiences directly related to the questions was unique and clever.

I haven't seen Slumdog but still have some interest in it, even though I have mixed feelings about Boyle. Certainly he has made some important movies and some duff ones.

I've never seen The Beach either, though I read the book either just before or just after my honeymoon on Thailand's Koh Samui. I think the film might tarnish the memories of that time!

*, Danny Boyle has been hit or miss for me too. Actually, I didn't like "Shallow Grave" and so many folks loved it...but I found it a boring film noir. I know. Weird, coming from me. But when he's good, he's really fun. I think you'll have fun watching "Slumdog". I was going to add some notes about "Sunshine" here...but didn't have time last night.

Review of "The International" next...

I caught half of The Beach on TV the other night. I really didn't like it!