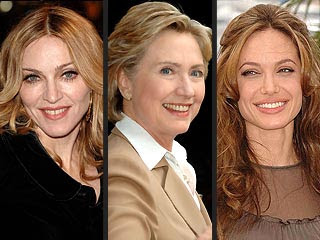 A geneologist has found that Clinton and Madonna are tenth cousins from a 17th Century French ancestor who moved to Quebec and then moved south. Jolie is also related to same Canadian. I guess Jolie and Madonna got all the sexy genes.

Was excited because new Madonna album was originally scheduled for release this month but pushed back till spring. This is one of my favourite Madonna songs. 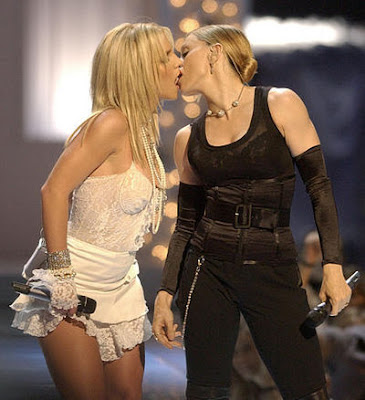 Brittany Spears in happier days.
Posted by Candy Minx at 12:15

All good, I just wish she could keep those "I used to be a stripper" moves out of her videos. That said, she makes me proud to be a country girl.

I love Madonna's music. I've always been impressed with how she's able to reinvent herself every five years or so. She's a very smart business woman.

Hmmmmmmmmm, wonder if the politics just wore off the sexy? None of the Clerks I met were what I would consider sexy, nor the female commissioners - now that would make some interesting speculation. Has history every produced a really sexy politician (female that is)? But, of course, it would be a double bind, society as a whole discourages smart in sexy women, or sexiness in smart women, does it not?

Jolie has the quality so many of the 40's stars had, plus brains and much heart - dazzling woman. The "line" produced well.

The whole Madonna/Britney/Christina Aquilera (a lot of people forget that she was the 3rd participant) kiss made me mad. Women kissing... big deal. I couldn't believe that it got as much press as it did. It proved that if nothing else, Madonna is one of the best when it comes to marketing herself and manipulating the public.