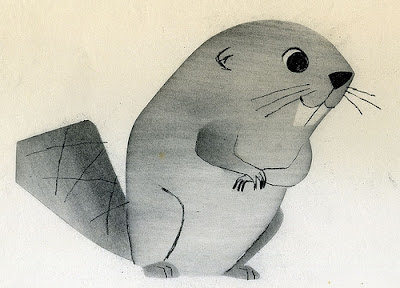 For instance, there is something called Green Bean Casserole. Of course I want to create a meal that Stagg is used to...he has already told me that no one in America eats squash, brocoli, brussel sprouts for Thanksgiving. Oh okay.

Since I've never made an American version of Thanksgiving I started looking things up online...and guess what? I had always thought that Canandian Thanksgiving was something we just adopted from America. But...Martin Frobisher..yeah that guy down there...celebrated the first Thanksgiving with Native Canadians in 1578, 27 years before Pilgrims celbrated Thanksgiving in America.

Of course, this Green Bean Casserole is something I'm trying to re-create with organic products. It calls for canned mushroom soup, green beans, "french fried onions" (which I've never heard of) so I've been on the Googles looking for recipes. There is some ingredient that seems to be a packaged product of "onions" here is an ad from the 70's. Seriously, combined with the canned soup I am getting a gag going. 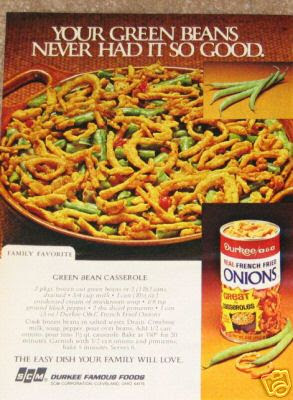 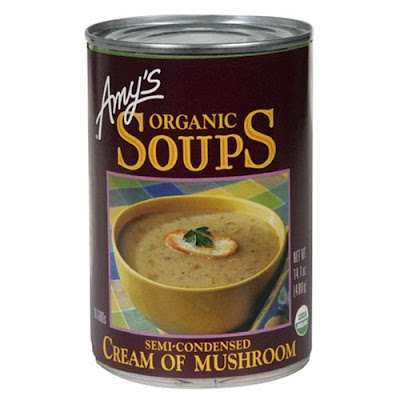 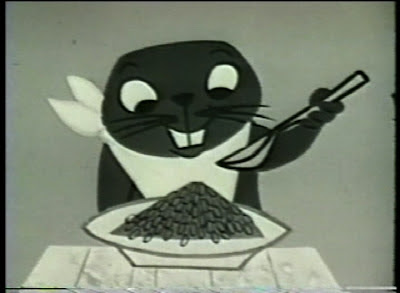 This is still from a Campbell's commercial with a (Canadian?) beaver...

Here is what I've found seem to be French Fried Onions:

Soak the onions in the milk for 5 minutes.
Heat the oil in a large skillet or deep fryer.
Take a handful of onions and run them through the flour with a fork to coat.
Fry in batches in the oil, stirring as needed to brown evenly.
Drain on paper towels and season to taste.
Store in an air-tight container.
Posted by Candy Minx at 17:28

Gag is right, my Canadian buddy!

Well, it's intensely popular dish. Seriously it appears to be a sentimental staple of the meal. I've been trying to figure out if it's based on a classic dish somehwere...

um here is a recipe that is introduced as a gourmet version of the "dreaded green bean casserole" so actually it sounds like it's the dish that people love to hate...?

Here is a "from scratch" version of the dreaded green bean casserole. I actually like this one, but see my notes at the end - they're important (well, for me anyways).

Blanch the green beans and pearl onions by placing them into a large pot of rapidly boiling water. Cook them for about 2 minutes, until the green beans have brightened in color. Remove the vegetables from the boiling water with a strainer then plunge into an ice bath to stop the cooking process. Drain them, then remove the skins from the onions and set aside.

Coat a skillet with olive oil and butter over medium heat. Sweat the garlic and shallot down until they caramelize. Add the bay leaves then the assorted mushrooms. Stir to combine, season with salt, pepper and thyme. Sprinkle the mixture with flour to tighten up. Add the milk and boil for 3 minutes to thicken.

Place the green beans and pearl onions in a 2-quart casserole dish. Pour the "mushroom soup" over the vegetables. Toss to make sure the vegetables are well coated. Bake in a preheated 350 degree oven for 30 minutes. Top with fried onions and continue to bake for 10 minutes.

I'd love to have a genuine US Thanksgiving meal one day, but it does seem to have a lot of weird pre-packed things in it! Surely doing as much from scratch as possible is by far preferable.

Like Aste, I would love to partake in a genuine US Thanksgiving dinner... but since I don't eat turkey, I guess I would be the odd one out, the one sitting at the stupid add-on table with the wonky leg, chewing on Brussels sprouts!

Good luck with your dinner, I'm sure it will be a great success!

Red, come on over...I'm on my way to Whole Foods I'll pick up a vegetarian turkey!

Thanksgiving dinner really is one of life's greatest pleasures...and I'm just having fun about the green bean salad. It does have reputation as having a life of it's own goodor bad...but it has good versions and bad versions of the recipe.

I absolutely love any excuse to cook turkey...I love th whole process and I baby the bird all day long in white wine and butter...

Yes, I think the French fried onions...must be onion rings? The thing is...will they end up crunchy or soft. I've had the green bean casserole with both types...the onions mixed in and soft...or added at the last minute and crunchy. I've never had the dish with fresh onions before though....we'll see...

Asterisk you are welcome to come to my house any American Thanksgiving and join us. In my house hold we only have turkey, cranberries, stuffing and pies. LOL... I dont go through with all the other thigns. Not when its just us four anyway.

Candy you will do just fine. Even organic foods should taste as good as regular mushroom soup.

as a proud american i feel it is my duty to speak on behalf of my nation.

2. as much food should be made from scratch as possible except for the cranberry sauce, which is better from a can though not as high in fiber or as good for your kidneys and urinary tract as the real stuff

3. brown meat is better than whitemeat

4. it is preferable to berate your family after you blackout from drinking rather than before so that you feel less guilty afterward

5. real american houses are often equipped with roman style vomitoriums specifically for the purpose of eating to excess more than your stomach will usually allow

6. the origin of this holiday comes from the indians being so happy that we came here

Candy, let me know how your green bean casserole turns out! You must submit it to Vegetarian Times! Actually the one I've tasted includes canned onion rings - sounds awful, but they turn out good. I can't imagine what ingredients must be in those canned rings.

We opted for fresh green beans which boy and I have been snapping this afternoon - because I've never met a kid who like GBC - only adults. He ate a bunch raw while he was snapping.

We didn't go organic (except for sparkling apple juice and organic chicken broth for northern stuffing) because I depended on folks to bring food here to prepare. (The last is coming in this afternoon except dessert.) Oldest daughter is bringing all the desserts (oh dear).

I'm getting ready to go to the kitchen to make spinach dip, stuffing, and then will steam yams for heating tomorrow. I don't know who all is coming tomorrow - youngest daughter is juggling men - we have to schedule them in shifts.

Of course Americans have brussels sprouts and squash for Thanksgiving... at least we yankees do! And I make all my stuff from scratch: brussels sprouts, chestnuts & shallots in a brown butter sauce, butternut squash braised in cider, chestnut stuffing, mashed potatoes, pumpkin pie, apple pie, and a small ham & small turkey breast. Let's not forget the cranberry sauce (I almost did!)

Are you going to deep-fry the turkey? On a hot plate? In the livingroom?

I didn't know about green bean cassarole. Americans are so interesting, eh? By the way, only in the Minx household do Canadians eat Brussels Sprouts at Thanksgiving. Even people from Brussels don't eat Brussels Sprouts. In fact, it is a my that they are even edible.