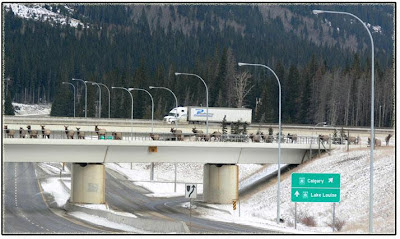 Tweety posted this picture on her blog yesterday. I did a double take. Is that real? 1) Elk crossing en masse like that? In Canada! And I didn't know about this? She found an article that said Canada had spent over a million dollars on building an "eco-pass" for wildlifebecause of all the car accidents and harm to animals. 2) I've been right there in that pic a million times. 3) I went to a lecture a couple years ago on wolves at the Banff Public Library about the National Park and one of the items discussed was wolves using highways and railroads as trails. You see, wolves, just like us, don't like snow packed in between their toes. 4) So they like to walk on the highway. Unfortunately they get hit by cars. But why don't I know about Canada building this million dollar passway...how wonderful of us! 5) Ah no...I went to the University of Google and found that it is a railroad bridge the animals have co-opted.
From Scopes:"BUSTED! Not sure if the photo was edited or not, but the bridge is definately not for elk or other animals. If photo is edited, they did a great job.Checked the area on Google Earth, and found the intersection in the photo. The bridge that the elk are on, is a railroad bridge.On Google Earth go to 51 12'20.03" N 115 32'12.38" W. (copy and paste these coordinates)Also there IS an animal brigde a few miles from intersection at 51 09'39.94" N 115 42'51.56" W."

6) Here is an artists rendition of a proposal for "eco=pass" in Colorado, Interstate 70. 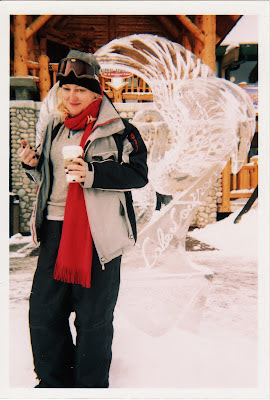 7) Yep, that's me a couple years ago in Banff. I love how I have a perfect manicure and lipstick. I crack myself up: I don't remember being that organized. 8) This is another random thing that a lot of people don't know about me, for such a girlie girl I'm a secret jock. My girlfriend and I stayed with my sister for a couple of days in Calgary before we took off for two weeks to Banff to ski. One night my sister and brother-in-law were like..."can you actually ski downhill?" Even my own sister doesn't think of me as active. 9) I first skiied in Smithers, B.C. a century ago it seems. We didn't wear high tech ski wear like you see in this pic. We wore jeans and hoodies. No chair lift. 8,000 feet on a T-bar. A t-bar is alittle piece of like plastic shaped like a t you put between your legs under your butt on a string. Yes, and you let some carny or machine drag you up a cliff. 8,000 feet of cliff. I must have been mad. Or else a teenager! Same daredevil difference.

9) I just liked this video. It doesn't have anything to do with this post except location. It made me really want to go to Banff. I love Banff...whereas, I hate Whistler. Whistler looks like The Truman Show all the buildings are cookie cutter design, beige and made in the last twenty years. 10) Banff still has a couple of the very bars I used to drink in when I was a kid and beautiful stone structures encouraged for new buildings too. I thought this video might be of interest to visitors here who have never been to Banff. You can tell that the person who made this video really was enjoying the place and took special care in constructing this piece.

11) What do false claims about Canada building a bridge for animals tell us about ourselves?

12) Maybe: that Canada is frivilous and touchy feely with it's budgets? Canada can afford to take care of it's wildlife...so should other countries? 13) That if we build over passes for animals...it justifies building highways and expansion for ourselves: see animals and people both benefit from suburban sprawl?

What other messages does this urban myth convey?

Thanks for clarifying that photo for me and off the topic. For the blanket I dont have a pay pal account and the one that hubby had a few years ago just kept giving us trouble so money order would be great and I will pacakage the blanket up for you in a day or so. I can even take it to the post office and get the shipping and handling priced for you right away. You will have to e-mail me for me to give you my address. Tweets. Thank you for the wonderful idea's.

Tweetey, Thanks for stopping by...and inspiring this post today. You really ahd me thinking with that photo of the elk crossing the bridge! I will e-mail you. I'll see what I can do to track down some wool for you too okay?

I really enjoyed your 13!
My TT lists 13 facts about the black panther.

8000 ft in the air with just a plastic T between your legs under your butt on a string? Wow, that's bravery. By the way, cool pic of you with the ice sculpture in the background.

Tink, I loved your black panther list. And great to see you.

Malcolm, yes...I was a bit of a "risk-taker" when I was a kid. I'll tell you though...nothing quite compares to back country down hill skiing. Re: pic, thanks, I have my moments. I'll be over to your blog shortly for TT and etc.

That was a wicked funny photo, tho! How the heck do people come up with stuff like that ;-)

Janet, I don't know...and the thing is...for a good minute or five...I thought it was authentic. I really did...and then I was like, hey wait a minute...it is really funny...and I thought it was so cute that the idea that Canada was this Utopia building expensive sidewalks for animals.

Seems to me that we want to believe that SOMEone cares about the wildlife out there!

The slopes where the Tour Manager and I snowboard (read: learn to board) have a t-pull. Ever tried to do that on a snowboard? I'd rather sit on it...

OMG! Smithers, BC!!! I love that place. I spent three very happy summers just outside that town, in a place called Telkwa, when I was young and carefree. I haven't been to Whistler, but I have been to Banff (love it)and Jasper too.

I think the idea of animal bridges suggests humans think animals think like humans. Which is quite the prejudice. Interesting post!

Ive heard its extremely cold but beautiful there. Id love to go some day:) Happy TT.

yea - someone from the Colorado Marketing association probably made that picture. It's just not something that would ever happen here. We'd like to be a green, nice to animals state but it would get in the way of hunting season.

Great TT! I have visited Canada, but never over to the Banff area. I have pictures that other family members have taken while up there. It is a gorgeous area.

Where my parents live in San Patricio, NM, nature can be a little weird, especially the sight of my mother chasing a skunk spraying Fabreez in its tush.

This is a real photo.

"According to local residents, these elk are using an overpass built for the Canadian Pacific Railroad Track."


Wildlife crossing are real and what are they? A bridge for animals!

Very awesome TT! :)
I love it when I learn something new. I have most definitely done that here. :) Thanks!

Rose, thanks, I have those links in my above post. I am sorry they aren't obvious links....maybe I need to change the color of the font to indicate links? I love the Banff film. The issue with the "urban myth" isn't about the elk on that over pass...but whether the Canadian government paid over a million doollars to build it. What I have found is no, the elk are walking on a railroad bridge. There are several tunnels for wildlife in Banff National Park...specifically built for wildlife. The bridge in the photo was not built for the elk. (unless you can find verification?)

Was thinking the comment from scopes was yours. Missed the from scope part. lol From what I found these elk are using an overpass built for the Canadian Pacific Railroad Track.

this fits right in with Ch VI in Jamake Highwater's The Language of Vision, which I was just reading today. He talks about how "The marks we make upon the earth tell us who we are." He talks about how architecture and gardens and other human manipulation of the landscape reflects how they (the culture) see themselves in the cosmos.

There was a whole section in which he traced the different kinds of perspective used in art through the ages and that made me think of you for some reason. Probably because you are 1) an artist of my awareness and 2) one I know to be interested in the kind of musings that Highwater engages in. But I suspect you discovered him long before this.

GREAT photo with the Elk. I think it's worthwhile building safe crossings for animals. Here we just put signs "deer crossing", "bear crossing" and let them fend for themselves...

That's crazy, with the animals. What a wild photo.

Good morning... got a kick out of your T13 and wanted to raise a question: "What if governments did more for animals and less for corporations?" Just askin'...

Neat list. I know the 405 has plans for an eco bridge like the on you showed. Happy TT.

I hear you on #8. I was enthusing to my mom about how much I enjoyed going to the gym every day when we were on vacation this year, and she said "YOU? Lifting WEIGHTS?" *sigh* I've been lifting weights for 20 years, mom.

I LOVE the elk crossing---but it's so sad about the wolves. Our city is bordered by an enormous prairie and a few years ago a flood caused it to fill up with water again (for awhile). All the alligators swam up around the road and starting lying alongside the road to bask in the sun---dangerous for them and for everyone else. I think they built an ecopass UNDER the highway (which is raised above the prairie) so they could go under.

Eco-passes are a wonderful idea; it's so sad about the wolves. I've never heard of Banff but now I'd like to visit....

Hi! Surprise! Here comes the very person who made this video! I'm itobun, aged 40, a computer engineer making some software for carmanufacturing living in Aichi pref. which is famous for having the headquarter of TOYOTA Motor comany, 200 miles west of Tokyo.

I really appreciate you to take the time to see it and the compliments.

In this summer I was chosen as one of 50 product testers of Apple Japan's brand-new MacBook out of 15,000 candidates and made this video you quoted using iMovieHD on it to see how it works and write down my impressions on my blog to report them. I used private videos of my honeymoon to Canada(10days from banff to Niagara) to make the piece.

I was really surprised at how sharp, critical eye you have when I read your blog for the first time. You knew nothing about these backgrounds of this piece but precisely pointed out "You can tell that the person who made this video really was enjoying the place and took special care in constructing this piece." Yes, exactly I was and absolutely I did.

Unfortunately one thing I have to tell you is... now I have to call my wife who were sitting on the seat next to me in the video, adding "ex", haha. Don't worry. Just water under the bridge with bunch of elks, haha.

Hope you're doing all well and have a happy new year.