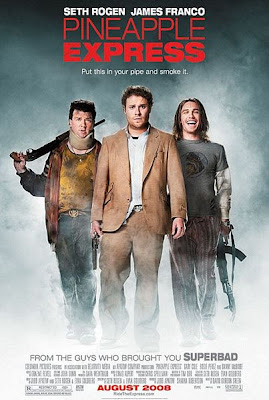 Pineapple Express has some of the best comedic acting and the body-work comedic acting is brilliant. There is one scenen where James Franco is running with Slurpies...how do I explain how very brilliant and funny he is...it
's the way when he sees the cops he runs sideways. I can't explain it. It's visual and primordial and as good as Buster Keaton or Charlie Chaplin.

It's no surprise the James Franco got nominated for a Golden Globe for this movie (he is also in Milk and superb). Robert Dwoney Jr, is nominated for an Oscar in Tropic Thunder, he won't get it but it highlights how fantastic his role is in that hilarious movie.

Now, generally, women aren't crazy about these genre comedies. Let's face it, it's really a guys world. I should have been born a guy as I find this whole new crop of films by some of these folks...Seth Rogen, director David Gordon Green, Judd Apatow are really combined great comeddic acting, body-work and characters. Even when Seth Rogen wakes up after sleeping in his car overnight I was laughing...his face did all the work.

"The best weed, it's like from Hawaii and Canada"

"a trifecta of joint smoking"... 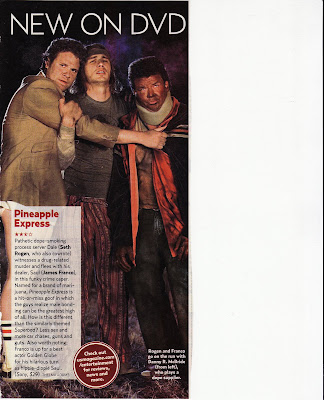 I'd probably like it. Seth Rogan is growing on me.

Have to admit I havent heard of these movies you mentioned. But more than likely something we will pass on..

seen this one. Cracked me up.

Apart from the first half hour and the final 10 minutes, I loved this movie. Seth Rogan is really growing on me. There were some really brilliant lines and characterizations in this film, I thought.

I saw Tropic Thunder and you are right I thought it was a bunch of foolishness. I didn't see Superbad. I will give this one a shot on your recommendation...I could use a laugh.