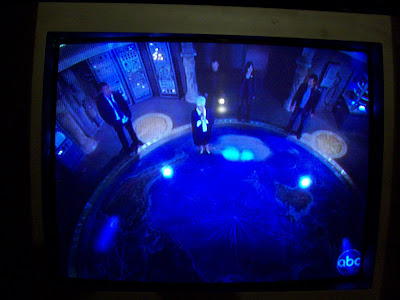 Is this Foucault's Pendulum? After last weeks episode we can add another book to LOST's list of reading material. Has there ever been a tv show that encouraged reading as much as LOST? I know...I took another picture off my tv...it was just such a cool set. My pic doesn'tbegin to do it justice. 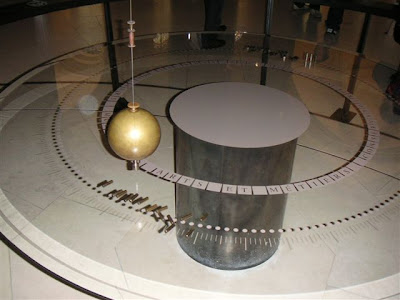 Above is the scientist Foucault's pendulum, built to demonstrate the earth's rotation.

Some of the books that have been on the tv show...and probably help follow plot or characters...

Watership Down by Richard Adams
Lancelot by Walker Percy
Of Mice and Men by Steinbeck
A Wrikle In Time by Madeline Engels
The Fountainhead by Ayn Rand
Bad Twin by Gary Troup
After All These Years by Susan Isaacs
The Brothers Karamazov by Dostoyevsky
Rainbow Six by Tom Clancy
The Third Policeman by Falnn O Brien
Hindsight by Peter Wright
An Occurance At Owl Creek by Ambroise Pierce
The Invention of Morel by Aldolfo Bioy Casares
Are You There God, It's Margeret by Judy Blume
Evil Under The Sun by Agatha Christie
The Turn of the Screw by Henry James
A Tale of Two Cities by Dickens
Catch 22 by Joseph Heller
Left Behind By LaHaye and Jenkins
Stranger In A Strange Land by Robert Heinlein
Through The Looking Glass by Lewis Carol
Our Mutual Friend by Charles Dickens
A Brief History of Time by Stephen J Hawking
Valis by Phip K. Dick
Gilgamesh
Quran
Heart of Darkness by Conrad
The Odyssey

Some previous posts about LOST (for Wandering Coyote)

Ah, thanks for the links!

And they mentioned Chronicles of Narnia last night in the 8 pm review show!

Even though they've never been explicitly mentioned in the show, I suspect Borges's "Tlon, Uqbar, Orbis Tertius" and Casares's "The Invention of Morel" were influences. Also Watchmen. I have a Dr. Manhattan theory of Alpert and the Others. And there's some time travel in Flann O'Brien's Dalkey Archives.

Oh, doy. I just noticed you also had Morel on your list.