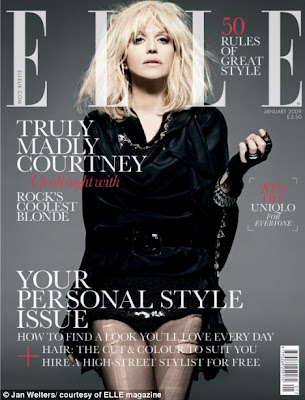 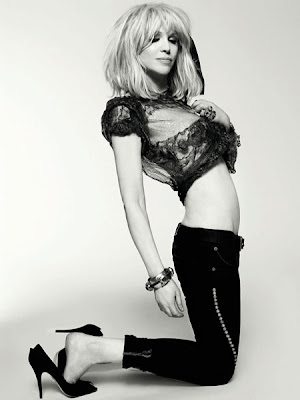 Courtney Love has claimed that the meltdown she suffered after the 1994 suicide of husband Kurt Cobain laid a path for Britney Spears’ nervous breakdown years later.

“I had a long, hard fall. I set the stage for Britney to crash and burn. I went through it all first,” the Hole singer says in the January 2009 issue of British Elle.
Posted by Candy Minx at 05:30

Hmmm, I don't remember reading anything about Courtney having a breakdown - thought she was always a "tough cookie."

Wow, setting the stage for Britney to crash and burn is quite the accomplishment. Har!

And I thought Cleopatra was making moves with her breakdowns long before. And how about Elizabeth Taylor? Winona Ryder also made headlines with her breakdown while filming "The Godfather III. (1989, Ryder had to quit the movie) Courtney Love did have some major meltdowns but I don't think she "set the stage" on that front. I like her music though and I'm glad to see her looking healthier.

I think that Courtney is overstating "trailblazing" meltdown from 1994. Judy Garland and Marilyn Monroe are just a couple of celebs who beat her to it. Not that having a meltdown should be looked upon as a badge of honor.