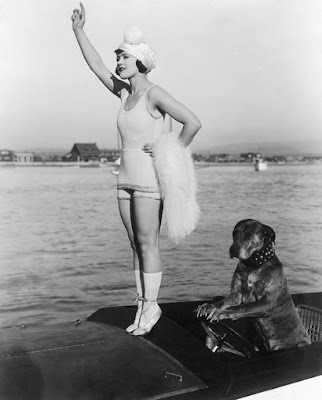 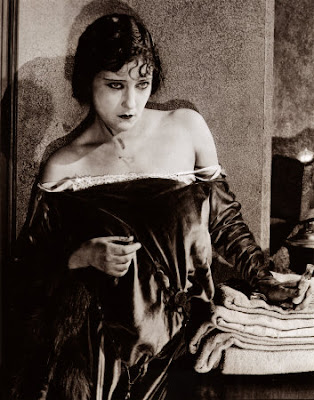 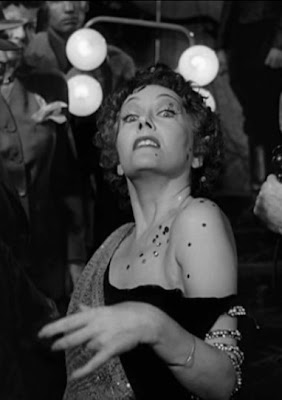 The other day my sister left a comment on the "Why Keanu Reeves?" post I made...and it's an example of why "good acting" is not only a subjective term...but also a performance or movie doesn't always have a concrete need for "realism". We've come to expect that good acting is "believeable" or "realistic"...but it's not always been that way. When we watch an older film, or a film from another country, we might give it a different expectation level...(? do we?)

My sister, the Underground Baker, wrote...

Speaking of acting I just caught the last half of sunset blvd. on the weekend. OH my god, the woman (ok, I've forgotten her name, can you believe it?) with the over the top characterture was so amazing.I bought into her character because it worked in the context of the movie and because I couldn't take my eyes off of her. Not to mention the total creep factor. And how refreshing to see a male character playing the whore.

(I can't get her claw like hands out of my mind)

What is great about Penn and many other actors is that its not just about emoting feelings - but movement, gesture, breath and for some actors that metamorphasis on what seems like a cellular level to becoming a character is just magic. I especially love it when they can turn the characters on and off on cue. (not that I get to see that very often but it's wonderful to witness)

Yes, it is cool to see a man, William Holden, cast as the whore...and considering that was 1950 it shows how insightful film noir is for studying the human condition. I love George Peppard in Breakfast At Tiffany's for a similar reason that he plays a whore. (well, so does Audrey Hepburn)

But we would probably reject the style of acting Gloria Swanson does in her body of work today...because acting styles and approval are subjective and go in and out of fashion. Merryl Streep pretty much comes close to pushing the limits with her role in Doubt...very Gloria Swanson-ish! Notice Swanson's hands in the above pictures...it's as if they aren't the same hands!...how they help communicate what kind of person she is playing.

"that it's not just about emoting feelings-but movement, gesture, breathe" ...Yes, that would be part of the study of "body work" performers practice. Here are some books on that topic...click here. There are a number of actors who I think of who are so adept and use their body in movies. Some I think of are Martin Short, Lisa Marie (remember how she moved in Mars Attack and Planet of The Apes?) Matthew McConaughey (his performance in Fool's Gold is a perfect example...okay okay...and his raw sexuality didn't hurt either), Edward Norton...and lots of easy examples would be comics, like Jim Carrey and Steve Martin, Bill Murray. (which reminds me...Buster Keaton had a cameo in Sunset Blvd.)

A lot of people trash Colin Farrel but I've always been a fan. I actually was very curious when he did the movie Phone Booth ...how can a whole movie be made in a phone booth?... but it was not bad actually. His steady performance helped with suspending disbelief. Realisism is valuable in unlikely situations or plots. I also liked a little seen movie called Tigerland, I landed up buying it on dvd (I really like war movies, okay) and in the dvd extras...are Colin Farrels screen tests. I was pretty blown away watching them develop...and here they are for Underground Baker...because it's true, unless you work with actors, most people don't get to see the process of building a character. (I hope these videos work in Canada...if they don't just go to YouTube and search for "screen test tigerland")

I guess maybe I might do a special shout out to Ireland for giving us Colin Farrel, easy on the eyes too, Sinead O'Connor, U2, The Pogues, The Waterboys, Aidan Quinn, Albert Finney, Cillian Murphy, The Cehiftans, Gabriel Byrne, Pierce Brosnan, Daniel Day-Lewis, Van Morrion...jesus, whats in the water over there!

Yum...Irish hotties...way more fun than talking about the public outrage towards the Octuplets.
Posted by Candy Minx at 13:08

Underground Baker is your sister - your real sister?

Another great body actor is John Malkovich. Watch the things he does with his belly from movie to movie. I don't think he necessarily slims or adds weight for each role, but he shifts his physique to match the role. Wonderful!

Re Colin Farrell: I hope you've seen In Bruges by now...

Candy, on a different but related note (back to the "good acting" dialogue), watch Naomi Watts in Mulholland Dr.

She seems to be acting really badly. Until the point when she's doing the audition, and suddenly she is fucking awesome. It's such an interesting piece of work...

Incidentally, by and large I actually think Watts is not very good. Furthermore, I think Lynch mostly doesn't concern himself with getting what are widely accepted as "good acting performances". But here, in those few minutes, it's as though she had to act her socks off, and Lynch knew it had to be a great audition. Fascinating!

*, Oh god...we love "In Bruges" around here (actually I purposely didn't mention his acting in that...because it's like a cliche disclaimer...I think he's always been a consistent good actor...he may take weird roles in not so good movies...but he's always been a good performer)...I could watch it over and over again. I'm madly in love with all three of those actors.An excellent observation about John M. I HAVE noticed it...and although you don't want to see "Burn After Reading" it has some interesting range played out in the actors. Jon m. is fantastic even though...it is aperhaps a little too campy of a movie for you.

You've brought up an kind of acting...that I wish I had a name for or that there was a name for it. Watts in "Mull Dr." is a fabulous example. And everyone knew it, thats why she was nominated at Oscars for that role...she was really pushed.

What is the acting...? I first really articulated this form of acting...which seems like -not acting- in "Pritzi's Honor". Operatic? Campy? Stilted?

But completely effective and adding to a sense of otherworldyness...that the moivie was stilted...that we had an unreliable narrator?

Lynch does seem to pick, or request his actors to often have a stilted style. Kyle M. in "Blue Velvet" and Laura Dern. Dern's whole performance in "Inland Empire" messes with her acting styles and she plays into several types of acting in that movie.

The more you watch Watts in "Mullholland Dr." the better you see she is..it's riveting. I think with Watts is we haven't seen her in many demanding acting roles. There actually aren't that many written for females.

"Doubt" "Crash" "American Beauty" "Prtizi's Honor" all have examples of a kind of stilted style (like Lynch actors)...of acting...it's fake-seeming but it is perfect.

Must do more pondering on this topic...

I agree with you about Farrell in In Bruges, of course. He's almost like Dougal in Father Ted. (Do you know that show? I hope so!)

Also, yes, the first time I saw Mul Dr., I was like, man Watts is so bad. But after a couple of viewings you get that she's playing this ditzy, naive country girl who can actually really act (as seen in the audition scene).

Maybe she is rarely pushed by her directors. Maybe Lynch is in love with the non-acting style of acting -- an "extra-natural" style, rather than merely the natural feel of Stanislavski, Strasberg, and The Method.

I hope to see Doubt soon...

One of the most endearing performances I ever saw was Roddy McDowell as Galan in Planet of the Apes. His facial expressions beneath the ape mask were awesome!!

Hi Preacherman, you're never going to believe this...I was watching the sequels to Planet of The Apes this past weekend. Stagg and I both loved these series...and we bought the dvd set with the making of too! Roddy McDowal and Kim Hunter are gods! I've been working on a blog post about the movies!

Thanks for the farrel clips. I always feel unsettled watching actors work. Its like - oh man, he has tricked me again... that man may look dreamy, but what he's doing is like being attracted by a wil'o the wisp, or a civil banshee.

I am never bothered in a movie, when the whole character is presented. Its when you see them in a room with no props, when you still believe the character being played is real...

Hey Candy, I'm home with no voice. So I can't call you!

Is Farrel his real name? Makes me think of a feral cat.

Just want to say what an interesting great post, and comments.

I swore I left a comment here. But it mgiht have been eaten by blogger. LOL.. Anyway I love a good actress or actor you can relate to in a movie. Its a wonderful experience really. Actors that you can feel that are the character are the best. Then it just doesnt seem like they are acting they are the real person even though that person does not exist..

Jason, cool, thanks. I get carried away on certain topics, it's nice to know sometimes they aren't wasting someones time, heh heh.

Tweetey, yeah it's good to feel you aren't thinking too hard in a movie but swept up in the themes etc.