The Skylark Bookclub: Next Book! 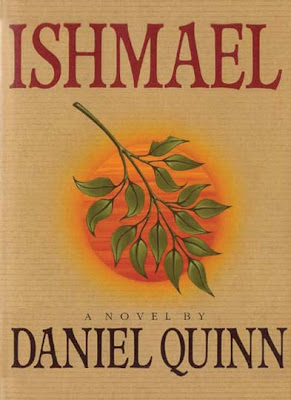 Zowie, It's my turn to select a book for our reading club. The YouTube movie Kymatica is a pretty tough act to follow but I have chosen Ishmael by Daniel Quinn.

Ishmael is interesting for a number of reason. It's got a huge cult following especially in the 1990's by alternative, environmentally and ethically savvy young people. (Pearl Jam's album Yeild was dedicated to the novel). I was always amazed in the Vancouver book store I used to work in how quickly the book would be ordered and would sell. This novel is not the most fancypants "literary" novel...it's no McCarthy or De Lillo...but it's much more accessible and probably more enjoyable to read. Plus, it's a novel that tends to really get under the skin of humanist and compassionate thinkers. (I'm not saying anyone is an asshole if they don't like this novel...but it does tend to attract and interest people who are concerned about "how to live" and how to "do the right thing")

One time I was serving some politicians at a bar I used to work at. They were from the Green Party and NDP. They were having an informal meeting and I said I wouldn't vote for any of them unless they had read a couple books I really wanted them to read. They asked me which books, one of them was Ishmael...and all of them had read the novel. Well...of course they had! heh heh...silly me...

Anything by Tom Sharpe. Books to make you laugh out loud!

If I were to select a book for a book club, I would want it to be a book I hadn't read, so I could fully enjoy it along with the rest of the club. But on the other hand, if I hadn't read it, on what basis would I select it? Best I don't join bookclubs.

I have to agree with Mr. A.. I love reading books but have a hard time selecting books I have never read.. I wouldnt mind trying this one out though for you of course but getting my hands on it is another story right now.. I cant get books at the library becauseI have a fine and Jeff cant because he doesnt know where his card is right now.. And money is tight of course.. Yikes.. I have some photo's to put up later but not now. Maybe tomorrow. We went to Milwaukee and went to the Zoo.. I know I just said we were hard up but we needed a day away.. Its not like we went 600 miles.. Only 100 miles maybe..

Thee Mike Brown, oh see I get a total kick out of Ishmael fans. I was fascinated for a while with the Quinn websites back in the 90's and early zeros where everyone asked...what are we supposed to do now? Like after reading the books they still didn't get..."there are no rules" etc etc "no programs" etc. And Radiohead fans...guilty as charged. heh heh.

Four Dinners, Sharpe is really good. And you know what? Some of his themes are close to the themes in this novel.

Mister Anchovy, I don't like choosing books for bookclubs. It's a huge source of stress for me. And I had a hard time choosing a book for this round. It came down to this one and "One River". I really love readiing books over and over. Not all novels but my faves. I read "David Copperfield" every couple of years.

Tweety, the links in this post are connected to the novel here online. You can read it for free. And if you like zoos...this book is perfect! All about zoos.

i knew you got it i didnt want to offend you. YOU know what i'm talkin bout lol thanks for letting me be a grump .

Mike, I'm Canadian, we have thick skins. We don't usually get offended. :)

Interesting enough I put it under my favorites and will read it as I have time and have the patients to sit at the desk and read. Thanks. Have my new post up from yesterday.

i cant deal with people who think that certain books are the good shit but have never really read the good shit. i bitch about it more online than in real life tho.

Mike, well you know...that is a very tempting topic. The trick is...most people believe that the books they like ARE the good shit. This comes down to an area where do we know who we are? Do we like what we like because of our environment, where we grew up, what our parents or teachers taught us? Or do we like things based on how we feel reading them? Or on their literary "merit", or the style, or the ease or the content.

Or do we define good shit as having all of the above etc etc. The thing is...my experience with such discussions or about books and music is that a lot of people don't separate what their own personal history and tasteis from deciding what makes a book good. Then you run into someone who loves a genre literature. They love sci-fi, or romance...and they think a writer like ...hmmm...say De Lillo, or Pynchon or McCarthy or any of the so-called established "good shit" is pretentious or flighty. Sometimes people simply don't want to work at the reading.

I don't know. I believe it's part of how we are taught and unless people consider how they came to be who they are (and this notions rests on the idea that we even CAN know who we are or how we were formed growing up ha ha) people tend to not be very openminded or tolerant of a variety of sources for storytelling.

But what the hell...I sure don't "know" at the end of the day...just possibly another thought forming out of a false ego ha ha ha...

my god, Candy, even your comments are thought provoking! I really think a lot of what we believe is largely influenced by where we live. I know in the deep south, I am definitely the odd man out, mostly because of my politics but also because of what I read. I can tell you ,the biggest sellers at my bookstore are the christian fiction and the inspirational books, neither of which I'm really into.

Btw i have set aside a copy of 'Ishmael' at my store. I'm looking forward to reading it.

Beej, I would be very curious to see what you thought about the novel Ishmael. Especially compared to the popular books in your stor. I've never even heard of Christian fiction! Only in America! I must go and find an example...I can't imagine..