The Anxiety Of Influence Or Why Easton Ellis Makes Me Laugh! 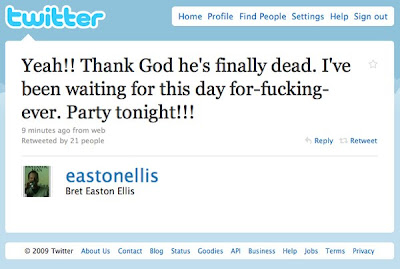 If you google Salinger's death you will probably come up with the above Twitter message from Bret Easton Ellis.

I am not sure I can explain why...but I found this to be one of the funniest things I've ever seen on the innernets.

The thing is...a bunch of people were totally horrified by this Twitter comment posted yesterday by Bret Easton Ellis. I however, laughed my ass off.

I'd like to tell you why I find this so hilarious but not sure I can. Immediately when I saw this Twitter (and it seems hundreds of websites are posting this quote, like The Huffington Post). I just had a huge guffaw. First, it might be the most blasphemous thing someone not religious could say or hear. My god... a literary god dismissed. Making bad with the dead. Of all people Bret Easton Ellis makes this even funnier since he surely is the heir to Salinger's style, and had a following every bit as cultish as Salingers devoted fans. If you're a writer and your work appeals to young people (Is there any higher acclaim? Is there any group better for financially-boosting and ego-boosting than the youth of the United States as your fan base?) then you surely will always be compared and have to lock horns with Salinger. Is it possible it would feel good to have one's major competition as "greatest living American writer" pass away? It's so sick, but I can't help but laugh at Easton Ellis being so forward. That is if he really means it. With Ellis I'm not too sure. His entire Twitter page is hilarious and could be written by some of his own characters. It wouldn't surprise me at all if Easton Ellis just wanted to say the most shocking thing he could think of...and I could even imagine him finding it funny. As I said, I sure found it funny. And I'm pretty sure Easton Ellis meant it as a joke. A lot of people are calling Easton Ellis a loser and a has-been since he posted this yesterday but to my mind, he actually seemed incredibly intuitive and relevant with this goofy bad-taste joke. It's right up there with John Lennon saying "We're bigger than Jesus" (did he say that or is that an urban myth?) or Elvis Costello's comment about Ray Charles in a bar fight in the 1970's. (apparently Ray Charle's said, ""Drunken talk isn't meant to be printed in the paper.")

Celebrity feuds are now a major part of mainstream news. They seem like a whole new format of market branding for famous people. The Leno/Conan fight, the Nicole/Paris fight, Rosie/Trump fight, the MacKenzie/Michelle fight, the Herzog/Kinski fight, the Bale/Hurlbut fight...somehow it seems fitting that Easton Ellis would pick a celebrity feud with a ghost.

Here is another one of Eston Ellis's Twitter comments:

A lot of gays at Avatar at The Dome tonight. Well, now we know what the most popular Halloween costume in West Hollywood will be this year. From Easton Ellis Twitter page

Who knew Easton Ellis had such a good sense of humour...I found his comment on Salinger a sign the guy doesn't take himself as seriously as I, only slightly, thought he did. Somehow his comment perfectly describes what it must feel like to write locking horns with the great. Easton Ellis's humour is strangely profound and insightful. And here is really why I found it so funny...In one simple sentence he portrayed part of the work of a writer, to lock horns with the past. He came out of the closet in what Harold Bloom called "the anxiety of influence"...

Bloom's central thesis is that poets are hindered in their creative process by the ambiguous relationship they necessarily maintained with precursor poets. While admitting the influence of extraliterary experience on every poet, he argues that "the poet in a poet" is inspired to write by reading another poet's poetry and will tend to produce work that is derivative of existing poetry, and, therefore, weak. Because a poet must forge an original poetic vision in order to guarantee his survival into posterity (i.e., to guarantee that future readers will not allow him to be forgotten), the influence of precursor poets inspires a sense of anxiety in living poets.

I prefer to think of the content of his remark to mean that he was relieved that the competition was gone....although it will never really be gone.

Yes, Stagg they do. And that makes the whole thing funny too.

Gardenia, that is what I was trying to say, thank you! And the idea that "the anxiety of influence" is partly a competitive force hanging over the writer/artist etc. I find it so funny. Easton Ellis finally has the market cleared for alienated youth!