"Hey, There's Skittles In There!" I realize me and Stagg are probably the last people to on earth to see The Hangover...we just kept missing it. As soon as I saw the trailers I knew I wanted to see it, but life got in the way. So we got it this weekend...and wow was it worth the wait. What a fucking outstanding hilarious movie. It's one of the best comedies I've ever seen. The writing is so wonderful and it really hits you as the movie goes on. If it wasn't enough that some of the sight gags just are killer...the writers and directors know just what makes one comedy rise above the others. And that is the essential core heart of the chaaracters. We saw this in A Fish Called Wanda. What made that comedy genius was that John Cleese really loved the girl. And in The Hangover the emotional delivery comes as we start to actually care about these guys. We even like "fat Jesus"...and trust me he isn't that likeable at the beginning. I laughed so hard my whole throat hurt and I started losing my voice. We kept it extra so we could watch it again today. Really, I'm sure you've heard this before and I'm late on this one...but you gotta see The Hangover...I wanna marry this movie! I don't wanna say too much, but if it's just for the physical opening half hour...this movie will have you happy to be alive...but it's even better because structurally the writers knew what they were doing and it's a masterpiece of ludicrous fun!

And just to mix it it up....the crazy Jersey Shore! 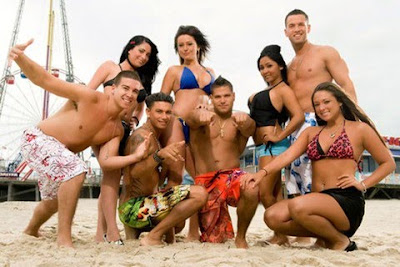 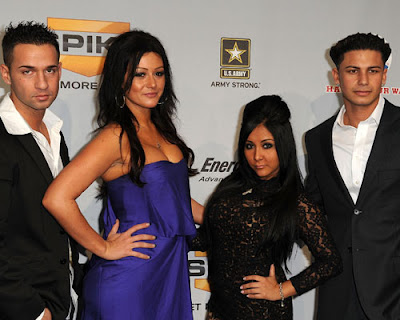 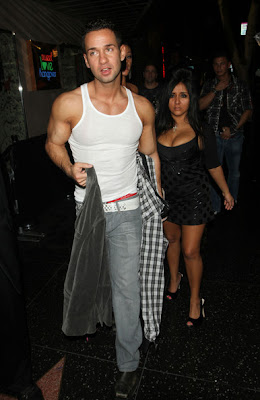 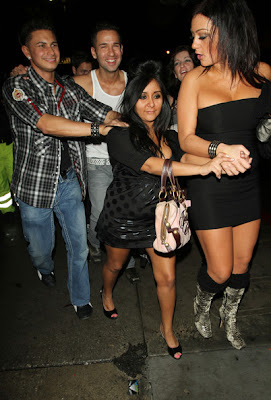 If you don't get MTV, then when Jersey Shore comes out on dvd you have to rent it. Seriously painful and adorable. We've been watching this first season and then doing a marathon and now Stagg and I can speak "jersey Shore".

We got an equation that is falling apart around the situation and Snooki is dramatized.

They say once you learn a couple of langauges...all other languages come easier to you. Seriously howling every episode...and oddly, even though the slang is different the show kind of reminds me of some of high school in Kitimat. Hey, us hosers have our own language. I figure I pick up this new speak of Jersey since I already speak hoser. At one point in this series you kind of realize that the meaning of life is about TGH. Tanning. Gym. Haircut.
Posted by Candy Minx at 13:01

I sat with my son the other day and watched 'Me Myself and Irene.' He loves Jim Carey. At first I scoffed but found myself laughing out loud at the silliest stuff.
It was fun.

The Hangover shouldn't be a good movie...why did we laugh so hard?

Beej, Jim Carrey is a sacred treasure. It's okay to laugh at craziness! Embrace it!

Mr. A. Yeah, it probably shou;dn't be a good movie...but I found myself thinking about how it must have been written...I think whoever wrote it reallly knew how to tella story and have it unwind. I was just loving every second of it. I felt ten years younger after laughing so much!

My daughter liked the film so much that she bought the DVD. I think she's seen it six or seven times. I finally watched it last weekend and really enjoyed it. You really have to wonder about yourself when you laugh during a scene when someone is being tasered.

Greg, I'd be much more worried if someone didn't laugh at "The Hangover". I think they'd have to be pretty fucked up people to not find that movie hilarious. I forgot about the tazer scene...see I've tears running down my face again...I have to buy the dvd.

the hangover was great.

that jersey shore gives me flashbacks about how hard it is to find love in seaside if you are like me and my jersey buddies instead of the stereotypical ginzo meatheads they decided to feature/exploit. pardon my ethnic slur lol. writing this from squaw valley.

Nope, you're not the last person to see The Hangover - I am. I'm looking forward to it. I'll save if for a day when I really need some all-out silliness and a good laugh.

Elliott is not alone. We haven't see it yet either. We're catching up on Dexter and then It Might Get Loud is next in the queue - but The Hangover waits patiently for us to get our act together. Can't wait!