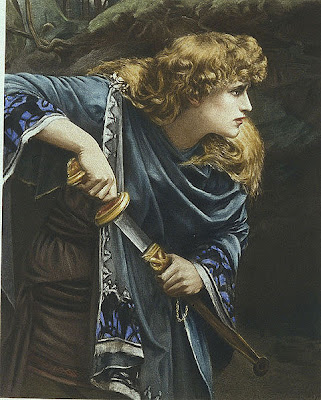 One of my online bookclubs is starting a discussion and group reading of Cymbeline by Shakespeare this week. We are reading one Act per week for five weeks. If you've never read a Shakespeare play with a group...here is your chance for a fun time. On the off chance that someone just stumbles on to my blog or a regular visitor wants to join in...here is the link at Shakespeare's Fans at the Goodreads webboards.

I've just begun the first act and the action is being thrown at us. First we hear two genetlemen gossiping about the Palace. (Just like our tabloids writing about our contemporary celebrities) Kings and Queens and Royalty were the movie stars of Shakespeare's time. We hear that the Princess has fallen in love and married a regular boy. This regular boy had been orphaned and adopted by her father, the King. The King is outraged she has married beneath her social standing and has banished this boy to Rome. (not a ban place to get banished, no?) He arrives in Rome and a gentleman is mocking him for thinking he could marry a Princess and she would stay loyal. The two men argue over whether this Princess Wife will stay loyal to a lowly Groom. the Groom defends the Princess as being loyal and true to him. The other fellow says...I will trick her into bed and come back here and tell you. They make a wager. A wager ups the ante in Shakespeare, as in life!

The fellow who is going to trick the Princess into having sex with him will win a fortune if he succeeds. The Groom...pissed off at the suggestion his Bride isn't faithful and truly in love with him wagers death. If the Bride doesn't sleep with this fellow...the result? Swords!

Above is a painting of the Princess, Imogen, by Herbert Gustave Schmalz.
Posted by Candy Minx at 10:17