Oh I feel like a big sister...I feel like my family is out there trying to do and say something...when I watched this video I was so reminded of me and my friends when we were art students. I seriously had tears in my eyes watching these folks taking a stand...for better or for worse,whether we totally agree with what they're saying...or not...they are out there working hard. I just love this video. I had to laugh out loud at about 9 minutes into the video the guy wh has been filming yells he is the %1. He has been trying to "correct" what the people are saying int heir manifestoes...he seems pretty smug and judgmental...but its his free will too. Very interesting to see how he tries to interupt and they give him their symbol of hands in a triangle which means "stay on point".

I have been reminded of an argument of film critic Robin Wood who argued that there are two major forces in North America, patriarchy and capitalism. And those two forces corrupt relationships. I love how the people working at occupying wall street have designed ways to move around hierarchy and to prmote democracy and consensus among themselves. I think many of the processes they have worked on will move into popular culture, like schools and workshops, baord rooms and government meetings over the next few years. And actually, many of their processes have been in work in such setttings for a while now.

I love in one of the manifestoes read during the above video a line is "fuck the cynics" and they all laugh...t's just lovely!


And just for the heck of it, in the spirit of the OWS general assembly... I shall re-post a manifesto here...and a back story is blogged here... 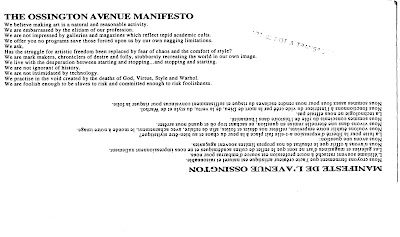