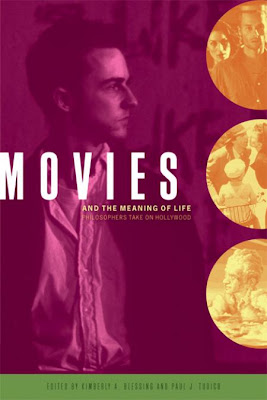 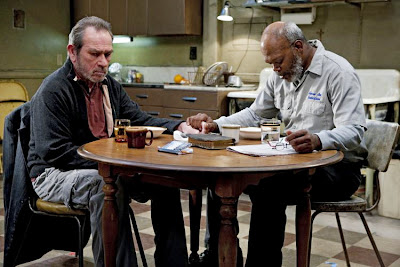 This could have been the start of a beautiful friendship.


I heard that Tommy Lee Jones was making Cormac McCarthy's The Sunset Limited for HBO, but when it was playing we were no where near a tv but somewhere on our way to Florida. So I was so hyped when I noticed it show up on tv listings the other day. Whoo hoo!

When this movie version started I thought "oh maybe I'm not in the mood for this" because it is a teleplay...and I thought maybe I won't get able to suspend my disbelief at this moment. But let me tell you...if you haven't seen this... the acting is so good. It's awesome actually. I actually forgot sometimes that one of the actors was Samuel L. Jackson and that is saying something....because love him, but he's intense and that is almost his tell. Both Jones and Samuel were hardcore.

We had seen the preview performance of this play five years ago and the actors were good. It was a preview so to compare it to a movie version isn't really fair. I loved the performance we saw at Steppenwolf. But sheesh...the level of skills in this version was really impressive. I got sucked right into both men.

I am obsessed with movies that talk about big ideas. Not because I am big idea or whatever....I am far from it ha ha. But because I think it's the most difficult kind of movie to make. How do you talk about big ideas or lofty philosophical concepts without getting preachy, too literal and worse boring. There are a lot of movies that have tried to tackle the meaning of life and "faith" and "truth"...some succeeded and some failed and even bacame pop culture jokes.

When we saw the play there was a scene that really choked me up and again in this version I was moved. It's when the two men eat. I just lose it. These two men have a rapport even if they disagree...isn't a great argument or discussion one of the spicy things about friendship? A lot of my friendships are built upon talking about all the big crazy difficult topics in life. Mister Anchovy and I probably spent the first couple years of friendship arguing and discussing art and the meaning of life over a Scrabble game and Peek Frean Fruit Cream cookies and tea. I wrote here on this blog about a huge argument Stagg and I had...and you know...I much prefer that kind of an argument than who did the dishes or being all pissed because someone cut you off in traffic. There's something wonderful about the human mind that gets so committed to a discussion and differences of opinions. Back when my friends and I were young at school studying art and setting out in the world we would have all kinds of intense, polarizing arguments. We used to meet every Sunday for brunch and after we covered topics like Star Trek:TNG or Seinfeld or Cheers we usually would get into some discussion about red flag topics and the voices would get louder and louder in the greasy spoon. These are the kinds of discussions that give spice and build friendships. You get to know what each others thoughts are and how to regroup after either so-called lofty topics or those core moral themes that we all have a tendency to take to heart. reconciling and getting to a place where we can share opposing values and ideas over a beer or a coffee and get passionate and share thoughts can bond. They test our character and each others characters and we get the chance to be tolerant, fun, thoughtful while polarized and even angry. Sometimes friendship encompasses our similarities and sometimes friendship encompasses our differences.

What makes me so sad about the contact in The Sunset Limited between these two men is they at one moment almost could have become friends. They almost could have been so different and so polarized. They broke bread. They spent a lot of time telling each other and asking about each other. They could have taken comfort in their mutual company. And then one of the characters can't shake his experience that hell is other people. We don't learn very much about this one man. He was trying to kill himself and the other fellow saves him from jumping in front of a train. I suppose its obvious that a person who is depressed and given up on life and suicidal might not be interested or able to make friends. One of the things I've thought a lot about over the years with this character named White is why did he stay with his conclusion? Why didn't anything ever happen with him to give him pleasure. Or rather nothing in this world gives him lasting pleasure or good feelings. He doesn't believe in any other world or experience like god, or faith or religion. Fair enough. I know tons of atheists but they enjoy this life, they make friends and community just like faithful people do. I've known faithful and religious people who are not community based or compassionate. There is no set rule on how one lives with ones experiences and beliefs. I was just so sad at seeing these two men meet, and share a lovely meal and enjoy it with each other....and yet that moment was not enough for our suicidal man.

This time around with this play I felt...peace of mind is a choice. And there is something beautiful about that freedom in such a choice.

The soundtrack is stunning. I had to turn off the volume because the music and sound effects were so realistic. I thought something was going on outside our place. The lighting is also excellent. This might not be Die Hard but these men are wrestling and fighting within their bodies and minds and it's so well acted.