"I seek in painting" Cezanne 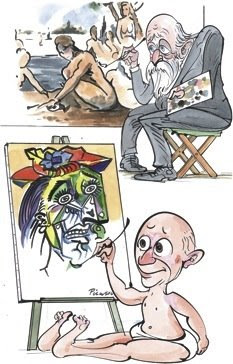 Prodigies like Picasso, Galenson argues, rarely engage in that kind of open-ended exploration. They tend to be “conceptual,” Galenson says, in the sense that they start with a clear idea of where they want to go, and then they execute it. “I can hardly understand the importance given to the word ‘research,’ ” Picasso once said in an interview with the artist Marius de Zayas. “In my opinion, to search means nothing in painting. To find is the thing.” He continued, “The several manners I have used in my art must not be considered as an evolution or as steps toward an unknown ideal of painting. . . . I have never made trials or experiments.”
But late bloomers, Galenson says, tend to work the other way around. Their approach is experimental. “Their goals are imprecise, so their procedure is tentative and incremental,” Galenson writes in “Old Masters and Young Geniuses,” and he goes on:

The imprecision of their goals means that these artists rarely feel they have succeeded, and their careers are consequently often dominated by the pursuit of a single objective. These artists repeat themselves, painting the same subject many times, and gradually changing its treatment in an experimental process of trial and error. Each work leads to the next, and none is generally privileged over others, so experimental painters rarely make specific preparatory sketches or plans for a painting. They consider the production of a painting as a process of searching, in which they aim to discover the image in the course of making it; they typically believe that learning is a more important goal than making finished paintings. Experimental artists build their skills gradually over the course of their careers, improving their work slowly over long periods. These artists are perfectionists and are typically plagued by frustration at their inability to achieve their goal.

Where Picasso wanted to find, not search, Cézanne said the opposite: “I seek in painting.”

Galenson’s idea that creativity can be divided into these types—conceptual and experimental—has a number of important implications. For example, we sometimes think of late bloomers as late starters. They don’t realize they’re good at something until they’re fifty, so of course they achieve late in life. But that’s not quite right. Cézanne was painting almost as early as Picasso was. We also sometimes think of them as artists who are discovered late; the world is just slow to appreciate their gifts. In both cases, the assumption is that the prodigy and the late bloomer are fundamentally the same, and that late blooming is simply genius under conditions of market failure. What Galenson’s argument suggests is something else—that late bloomers bloom late because they simply aren’t much good until late in their careers.

All these qualities of his inner vision were continually hampered and obstructed by Cézanne’s incapacity to give sufficient verisimilitude to the personae of his drama,” the great English art critic Roger Fry wrote of the early Cézanne. “With all his rare endowments, he happened to lack the comparatively common gift of illustration, the gift that any draughtsman for the illustrated papers learns in a school of commercial art; whereas, to realize such visions as Cézanne’s required this gift in high degree.” In other words, the young Cézanne couldn’t draw.

But such rich, complex, and conflicting natures as Cézanne’s require a long period of fermentation.” Cézanne was trying something so elusive that he couldn’t master it until he’d spent decades practicing.
Posted by Candy Minx at 10:52

Picasso is a difficult example because he was so unique. He drew like most people breath. It seems as if he could improvise effortlessly. He may be the best draftsman we've had since the Renaissance. How do you talk about a guy like that?

Some people would call Guston a late bloomer because his late work emerged all of a sudden in such a well-developed fashion, but I see him as having had almost three separate careers. At one point, during his abstraction phase, Guston referred to painting as a trial, in which the painter was judge jury and executioner. Which camp does Guston's work fall into, the conceptual or the experimental?

Obviously there are different approaches. There is a painter we both know here in Toronto who makes simple pencil sketches then executes them as precisely as he can as paintings. He looks at the sketch and he imagines as closely as possible the finished piece. Me, I can rarely live with an image I haven't worked at, struggled with, worried over, wrecked and repainted, scraped, set aside and so on.

I can see why an observer or a critic would come to the division of creativity into types, and I think we've seen these different approaches in action. To me though, it's beside the point in a way, a curiosity. It interests me far more as a painter than as a viewer, simply because as a painter, I can't help trying to figure out how the artist did it. As a viewer though, I want to deal with what the artist did.

By the way, I missed the boat on Cezanne. His paintings have never resonated with me in any kind of meaningful way.

I'm so glad you saw this Mr. A. I was thinking about you when I read the article...and I wished we were having a coffee over this one.

I had many responses to this approach by the writer. My first was that my favourite paintings of Picasso's are his ones he made in hte last couple of years of his life. The loose seeming naked couples etc. As for Cezanne, I do like many of his painitngs because they always play with my sense of what is real and how do we see things.

I agree with everything you have said here.

I see Guston very similar...as having three sets of experience reflected in his career:and with that I suspect he had three sets of audiences, heh heh. DecChirico seemed to have two careers...and I suppose some people would say he is best known for his first surreal landscapes, but I prefer his later paintings...although I love all of his work.

I thought the article was too concerned with "drawing" but on the other hand drawing is critical. I didn't think it mattered much what Cezanne's drawing skills were like as a young person but then, he became so apt at drawing in his so-called "successful" paintings.

What struck me in this article was the idea that really...overall...the idea that someone would be a young genius is an illusion. What about Basquiat? We will never know what he may have developed if he had lived to the age of 60 never mind 30. We may love his work...but it is a tragedy that we'll never know if he may have moved into a different experience of the world. Likely he would have (Robert Hughes has written some thoughtful things about the fetish with young artists).

Art dealers and collectors have been obsessed with the art made by emerging artists or more commonly termed new artists or young artists. There is a feeling that if you haven't been discovered in your 20's or 30's you are done. It is a unlikely event you will be "discovered" or find an audience or patron...look at the 1980's where so many young artists were making a fortune and now something else...where is say, David Salle? Is his painting career dead?

I liked the line that "late bloomers narrative is a love story" because what I see among my friends are those who have found a way to express themselves, make images and art...but by their own or their spouses patronage. They have continued practicing art because they have arranged their lifestyles an budgets accordingly...often with support both financially and emotionally from their family and friends. This is true on many levels for Stagg and I as we do not do a lot of things that are common or assume to be "needed" in order to buy art supplies and spend time in the studio.

It is an account of a love story and a support system we do not ritualize or acknowledge in our society/culture.

There is a saying in the music world "hip hop is not on the radio" and I think there might be another underground occurrence "art is not in the galleries"...

I think the conversation should've grown into the differences and importance of composition!