Shoot Em Up: A Fairytale 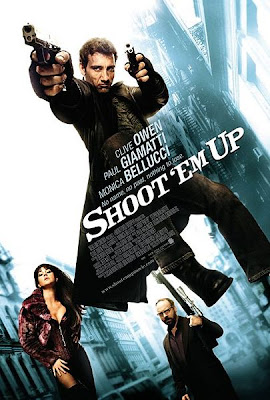 I am so glad I own this dvd version because this film is so much fun to watch again and again. In the feild of Sin City and Kill Bill this is operatic violence and comedy. I adore all three of the main actors and their energy and skill works in the same manner that John Woo accomplishes with his actors amid mayhem. Monica Belluci is not only sexy and gorgeous she is funny and is the soul of the story. In a movie where there are not only more bullets, but more guns, than words...we need her centered mothering hooker. When I saw Croupier (if you're going to Vegas, click on yellow text) I said to myself, self, you will attend every movie this man makes in the future. And I have. How wonderful is Clive Owen? He is one of the coolest action stars and draws a viewer in, no matter and especially despite how over-the-top a premise might be.

Paul Giamatti could hardly have just played HOB's John Adams, really? Because here he is far from ethical...he revs us up with his intelligence and wit. He's a hoot as a pudgy-Everready-bunny-villian with the best of them. Although this movie is out to break convention, and it does, partly by casting Giamatti as the bad guy, it still has to give us enough real hard core classic action to compete with it's predecessors/peers ( GODS=John Woo, Noriyuki Abe, Shunichi Nagasaki, Hideo Nakata, Sam Pekinpah, Sergio Leone, John McTieran, Richard Donner, Yimou Zang, Tony Scott)...and does it ever. There were so many action sequences in this film that really were sucessful. My very favourite though was Owen grabbing a rope and falling down a spiral staircase killing off dozens of henchmen. Very cool.

The love story, the baby, the settings were all worth getting this dvd for home and more. It's obvious the director, Michael Davis ( 100 Girls, Monster Man) spent a lot of time working out details of the baby within the action. Having the abandoned baby as part of the conflict was clever enough, but having it tied to Owens back throughout some of the most violent action gave the audience a whole new way to have face time during such action. Really well thought out.


And what good is an awesome headbanging fairytale with out a massive soundtrack? ...again another genre, like the gansta film,(Shottas) that showcases music in a fun adrenaline serving POW!