Shanghai Surprise: 13 Things About Architects and Buildings In Skyline 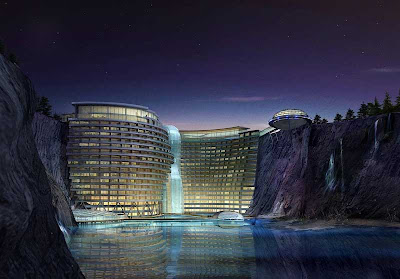 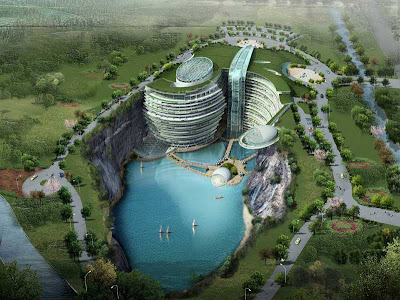 Atkins has won an international competition to design a five-star resort hotel set within a beautiful water-filled quarry in the Songjiang district close to Shanghai in China. Its stunning concept designs inspired by the natural water and landscape features of the quarry captured the imagination of judges to quash competition from two other international firms. Atkins Design. Atkins Home 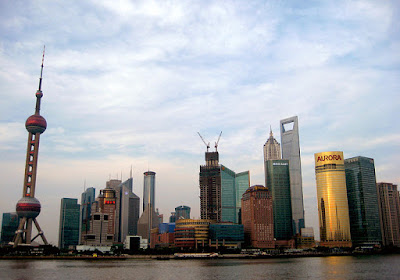 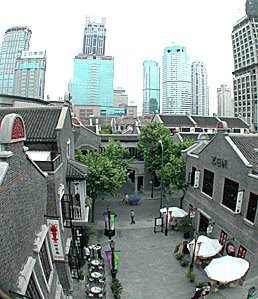 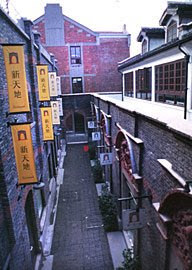 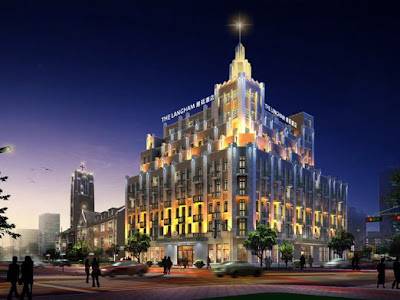 6) A small luxury hotel originally designed as an iconic masterpiece of art deco and neo-classic architecture by renowned architect Li Pan in the 1930s, and was once named "The Third Largest Hotel in the Far East". 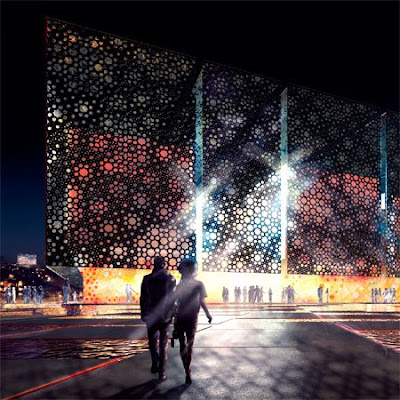 7) The United Arab Emirates Pavilion,/li> : Shanghai Expo 2010 Foster + Partners (London based architects) has designed the concept for the United Arab Emirates Pavilion at Shanghai’s Expo 2010. Devised to relate to the theme ‘Better Cities, Better Lives’, the pavilion is inspired by the principles of traditional Arab city planning. It integrates the latest technologies to maximise both the passive and active environmental profile to illustrate the essential principles of a humane city that captures the spirit of the UAE and articulates its commitment to a more sustainable urban vision for the future.
8) Come to Shanghai, now! No, this is not a travel industry advertisement, nor a paid promotion of any kind. It is a warning, and those who don’t heed it soon will forever miss what has made this arguably Asia’s greatest city, as its leaders gird to complete a breakneck and all-but- declared bid for the title of the world’s greatest.

The remaking of this city, which is well under way, ranks as one of history’s greatest urban transformations. With 4,000 already, it has nearly double the number of skyscrapers as New York, and another 1,000 are due to rise within the next 10 years - all within a single generation.

The overall result is sure to be stunning. “The future Shanghai will have smooth transportation, a beautiful central city, with charming historical and cultural depth, but it also needs to be energetic,” said Tang Zhiping, a senior city planner.

In another era, Shanghai was China’s one international city, its window on the world, and its principal port. In many ways, it remains the country’s showcase, outshining even Beijing - although officials here find it impolitic to come right out and say it - which is undergoing a massive transformation of its own.

The reason you must come to Shanghai now, if cities remotely interest you, is that the work here not only constitutes one of the world’s great urban transformations, it also involves one of history’s great disappearing acts. An old city of organic communities, with intimate, walk-up buildings and extraordinarily rich street life, is being replaced, almost in the blink of an eye, by a new city of expensive high-rises, underground parking garages, and lifestyles based on sheltered, closed-door individualism. From Howard French in NYT's. 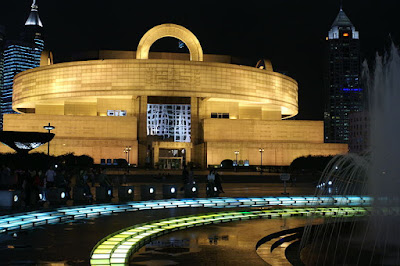 9) The Shanghai Museum was designed by a local architect, the new museum building is designed in the shape of an ancient, bronze, tripod cooking vessel called a ding. It is said that the inspiration for the design was specifically provided by the Da Ke Ding, now on exhibit in the museum. The building has round top and a square base, symbolising the ancient Chinese perception of the world as "round sky, square earth" 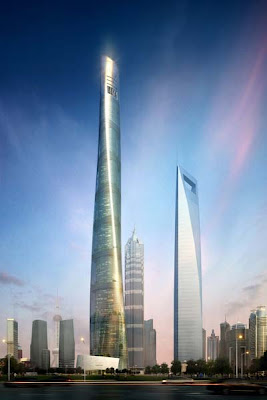 Shanghai Center is going to be 127 floors high.
9) Gensler is a global design firm headquartered in San Francisco with offices in New York, Los Angeles, Washington, Chicago, London, Dubai, Shanghai and other cities. The firm was founded by Art Gensler, Jim Follett, and Drue Gensler in 1965 originally focusing on corporate interiors. Gensler is credited for establishing the profession of corporate office design as distinct from the practice of architecture and interior decoration.
Today, Gensler is the largest architecture firm in the United States and in the world, as well as the most profitable[1], employing over 3,000 people in 34 offices worldwide. The firm specializes in multiple practices including: Commercial Office Buildings, Workplace, Retail, Airports, Hospitality, Education, Mixed-use & entertainment, planning and urban design, brand strategy, Mission Critical facilities and others. from HERE. 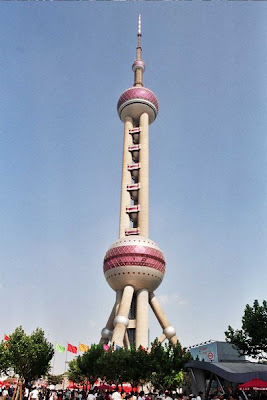 10) Designed by designed by Jia Huan Cheng of the Shanghai Modern Architectural Design Co. Ltd. Construction began in 1991 and the tower was completed in 1995. At 468 m (1,535 feet) high, it is the tallest completed tower in Asia, and the third tallest tower in the world.
11) The Oriental Pearl Tower features 11 spheres, big and small. The two biggest spheres, along the length of the tower, have diameters of 50 m (164 ft) for the lower and 45 m (148 ft) for the upper. They are linked by three columns, each 9 m (30 ft) in diameter. The highest sphere is 14 m (46 ft) in diameter.
The entire building is supported by three enormous columns that start underground. 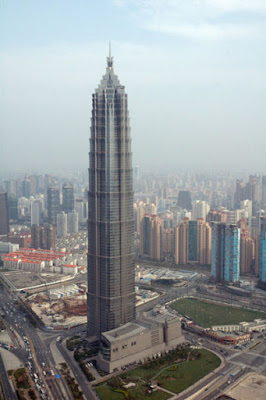 13) The building is located near the Lujiazui metro station and was built at an estimated cost of 530 million USD. It was designed by the Chicago office of Skidmore, Owings & Merrill. Its postmodern form, whose complexity rises as it ascends, draws on traditional Chinese architecture such as the tiered pagoda, gently stepping back to create a rhythmic pattern as it rises.
Related Links:
Pictures Shanghai Architecture
The Art of Contemporary Shanghai Architecture

Click on Mister Linky icon to link your blog, visitors and Thursday Thirteeners.

These are stunning beautiful pieces of work - but the down side is the loss of history and intimacy. I bemoan that fact so much on the beaches as the quaint fun places get moved out and the swankly landscaped multi-storied condos rise to the sky. The mood I'm in tonight, I want to moan, ohhhh Babel.

Wonderful post though - I would have never thought to do one like this - it turned out really nice and has a shine to it that almost tempts me into accepting that loosing those little neighborhoods is worth it for such beautiful buildings.

Stunning for the eye. And I imagine a bit stunning for many of the inhabitants to have watched all these rise in so short a time.

Funny thing. I heard a quote said to be from an architect this week and automatically thought of you. Then I thought that that was far from the first time that a subject I encountered elsewhere reminded me of something I'd seen here. Then I thought, too bad there can't be a 'site-meter' or technocrati type service that could keep track of such things because wouldn't knowing how often a previous visitor finds something they encountered to have continued or multi-faceted relevance be as valuable, if not more so, than simply knowing how many page views or the exact wording of the search terms. Ah, but it would take mind-reading technology for that. And that is creepy to think about.

Ah, if your curious as to the quote that got all that started? I don't remember who except it was a German in the early half of the last century. And he was comparing Ancient Greece and Ancient Roman architecture. It was something about Greece having used a human scale for statues and building while Rome and gone gargantuan which was a sign of cultural decay. I am so totally paraphrasing that. And I've got myself so confused I'm no longer sure it wasn't actually here that I encountered that quote which would make all of this irrelevant. tho i am certain that there was something either on TV or in a novel this past week that reminded me of your recent posts.

the quarry idea? what a piece of genius thinking!
and doesn't it look stunning. i'd love to see it completed.

Wow! Great photos! I didn't think the first two of the hotel were real until I read the text. They look like something out of a sci-fi movie.

Thanks for visiting my blog.

Candy, check your email! I've sent you your interview!!!!

Those are beautiful photo's and skylines..

Zany-mad blog- saw your post on the oprah chic site-you are one creative cookie!Love it.
KB

The UAE pavilion is gorgeous. So are all these buildings.