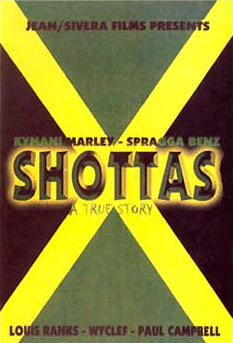 This is one of the coolest movies EVER! It is also the most bootlegged movie ever made. It was in bootleg circulation for years before it had it's official release. Not only is the making of this movie interesting, the bootleg history...it is a gorgeous looking movie with a strong emotional and violent narrative.

A few months ago we picked up a shitload of dvds. We do that every now and then when we see a movie store with a sale. I like to collect movies. It's really the only thing I collect anymore. I used to collect all kinds of things...decal glasses (I used to make Mister Anchovy pull over his car for garage sales...my collecting addiction was so strong).

Stagg and I both love action and gangster movies so we have quite a few of them. One of my favourite movies is an old Jamaican classic called Rockers and when I heard of Shottas I knew I had to get it because it sounded like it would be a good double bill with my old beloved movie Rockers. I am also a huge fan of Scarface by De Palma (I love the Howard Hawks one too). Actually, a lot of people might not know this...but long before rap culture picked up on Scarface the goth and punk scene was really into the movie. I often went to pals houses and not only would they have punk stuff, they often had a poster of Al Pacino's role as Scarface. I have owned two video versions and a dvd version...and worn them all out. Somewhere I have a commenorative box set of Scarface. Sometimes after a night of clubbing friends would come back to my place (I had to let the babysitter go home) and we would watch movies all night...a fave being Scarface.

Shottas is powerful and frightening. Jamaica and Miami are the setting and the movie stars one of Bob Marley's sons., Ky-Mani Marley and takes the title from Jamaican term for "gangstas". Two teen boys rob a soda pop truck in Jamaica, partly because they are tired of eating "sardine sandwiches" and they purchase visas with their booty and become major players in the underground scene in Miami crime. Marley is very strong in this role and I immedately was bonded with his character. All of these guys are monsters though, make no mistake, because they know it too.

The cast is awesome with a fellow Stagg and I really like. He played a similar role in the movie Belly and he is fantastic but I can't find anything much about him on the internet...(hhhmmm?) Wyclef Jean makes an appearance (from The Roots), and Spragga Benz and Paul Campbell are very good, with just enough melodrama to keep the movie rooted in it's "B" traditions. This genre of film has a rich history with soundtrack and the soundtrack here is dead on. Another endearing aspect of this genre of film is language. The patois, the jargon and vernacular is part of the joy of this film. But it is not for the squeamish: it is for "Blood Clots" only. There are moments of reall cool in the cinematography. I particularly liked two scenes. One in a mans' washroom in a night club. It is a shoot out done in slo-mo and it really grabbed me. The other is in the hot tub of Louie Rankin's gangster Miami crib backyard. The lighting is incredible and feels both monolithic and exploitive. The effect is brilliant. I am so glad we own this one and the extras really pull it all together. Even the history behind the movie seems to be a bit of a rags to riches story...and not fully revealed. And the good news? There is going to be a sequel.

As you know, we collect all kinds of stuff...and we had to move most of it too!

Mister Anchovy, well over the years I've learned it's a lot easier to move books dvds than books heh heh.

Gardenia, I've seen the latest Die Hard movie four times. And you know what? Every time the "kid" tries to punch the bad woman...I laugh, it's such a good comedic move. I love Die Hard. Shottas is a much more tragedy based kind of action film, just be warned if you check it out.